ST. MARYS DEANERY — When the Miss America Pageant airs Jan. 30 on TLC, residents of St. Henry will be watching with pride and prayers as one of their own, Erica Gelhaus, takes the stage.

Gelhaus, the reigning Miss Ohio, and her family — parents Ron and Judy and five younger siblings — are members of St. Henry Parish.

It was a guidance counselor at St. Henry District High School who first introduced Gelhaus to the Miss America Scholarship Program. As the eldest of six children, “I was facing the challenge of paying for college,” Gelhaus explained. “When I learned the program gives away millions in scholarships each year, I was amazed, and I really liked the emphasis on community service. My original goal was to earn money for college and I ended up falling in love with everything the pageant stands for.”

To date, Gelhaus has earned some $37,000 in scholarship money and is currently a senior at Otterbein College, where she is pursuing a degree in music and vocal performance and a minor in arts administration.

Gelhaus discovered her love of music when she began taking piano lessons at the age of eight. Her interest deepened in high school when her parents gave her voice lessons as a Christmas present, and she developed a love for classical music and opera.

At Otterbein she has been president of the college’s concert choir and been involved in many performances, including a principal role in the Merry Wives of Windsor. Her goal is to become a professional vocalist.

Gelhaus was named Miss Ohio last June in Mansfield, dazzling the audience and judges with an operatic performance during the talent competition. In the seven months since the pageant, Gelhaus has made 200 public appearances and traveled some 25,000 miles.

“It’s been very much a learning experience,” she said. “I’ve grown a lot in my faith throughout this whole journey. You really have to trust in God and His will for you. I’ve met so many people who have been an inspiration to me, and I hope I’ve been the same to them.”

She stressed the important role the Miss America Scholarship Program plays in helping young women to fulfill their dreams and reach out to others. “The program is in its 89th year and is part of American tradition,” she said. “It really inspires you to believe in yourself and what you can accomplish. Each contestant has to have a personal platform, so there are 14,000 women out there pouring their hearts into causes they’re passionate about. There’s so much good being done.”

Gelhaus’ platform, “Turning the Page for Children’s Literacy,” originated with her own passion for reading. While working at a local library she realized the importance of changing a child’s perspective on reading. This, along with her younger sister’s struggle with reading, inspired her to found a reading program known as Athletes Promoting Excellence. She also volunteers at the Nationwide Children’s Hospital for their Reach Out and Read Program, which highlights the importance of making reading a priority and even a family activity.

“Reading is the foundation of education, and I want to do anything I can to promote literacy,” Gelhaus said. “Education is the best gift you can give anybody, and it all starts with reading.

Gelhaus was already off to college when Precious Blood Father Tom Hemm arrived as St. Henry Parish as pastor in 2008, but since then he has come to know her family as “very faithful members of the community.”

“Music is the prime inspiration in Erica’s career as Miss Ohio,” Father Hemm said. “These same gifts she has shared over the years with her parish community in its music ministry. Erica has given full and clear witness to the values she received growing up in the St. Henry community. In her role as a celebrity on the way to becoming Miss Ohio and during this year of her reign, Erica has reflected her personal convictions that aren’t always understood or appreciated in popular culture. I admire her for this. I know she goes out of her way to find a parish to worship on Sunday in the midst of her busy touring schedule.”

The attitude she brings to her project of promoting children’s literacy is that of a corporal work of mercy. She has dedicated herself to this work for years and her heart is in it. She has a way of empowering others,” he added.

Hundreds of well-wishers gathered for Gelhaus’ official send-off to the Miss America Pageant on Jan. 11 in St. Henry. The event included entertainment from her Miss Ohio court and a sneak peak at her wardrobe for the pageant.

“It was wonderful. I was just speechless and amazed at all the support,” Gelhaus said. “I’ve been really blessed to live in such a wonderful community. I couldn’t have made this journey without their words of encouragement, the cards they’ve sent and the prayers they’ve said for me. God can do amazing things through prayer.”

Approximately 150 relatives, friends and members of the St. Henry community will be in Las Vegas to cheer Gelhaus on during the pageant, including her parents and siblings.

“I feel very blessed for Erica to have this experience,” said her mother, Judy Gelhaus. “I grew up watching the Miss America Pageant and for our daughter to be part of it is so surreal. God has given her a lot of blessings and am I’m so happy for her.”

“Erica has worked very hard for this and we couldn’t be more proud of her,” added Ron Gelhaus.

As she prepared to leave for the pageant Gelhaus told The Catholic Telegraph that, “I’m feeling very excited and very ready — prepared in every aspect of the competition to the best of my ability. After that, it’s up to God’s will. If God wants this as part of my journey, I will be blessed, honored and humbled to serve as Miss America for a year. If not, that’s okay, too. I’ll know that God has greater and better plans for me.” 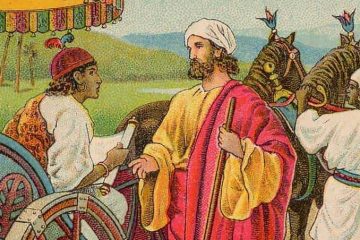