RALEIGH, N.C. (CNS) — When Aida Sarkisian and her family left their home in Iraq for the U.S., it wasn’t because they wanted to. It was because their survival depended on it.

The refugees received death threats as far back as 2006 in their homeland because of Sarkisian’s work as an interpreter for the U.S. military in Baghdad.

They applied for refugee status with the International Organization for Migration to relocate to the United States in 2008, but they were not approved until mid-2015.

Their long journey to Raleigh included a move into the Kurdistan region of Iraq, where they endured the continuing dangers of increasing violence from the Islamic State, and as Christians they were more vulnerable to attack.

Sarkisian and her husband, son, daughter and mother left behind their loved ones, their careers, their culture, their church and all of their belongings to start a new life in an unfamiliar land where they knew no one. But, they were free of danger.

They met another Iraqi family living in the U.S. who invited them to attend Sunday Mass at St. Sharbel Maronite Church, a mission chapel on the grounds of the Catholic Community of St. Francis of Assisi in Raleigh.

Though the Maronite Catholic faith wasn’t the same denomination as their Armenian Apostolic Church, the traditions were similar and the celebration of Mass in Arabic allowed them to worship in a familiar language.

“We found many nice friends in that church,” Sarkisian told Catholic News Service. “It finally feels like a new beginning now that we have found them.”

This religious and social connection has helped ease the family’s collective homesickness.

Continuous offers of help from fellow parishioners and church leaders also have provided them with a more secure feeling in their new domicile.

As the threat of Islamic State violence in the Middle East intensifies, it forces more Iraqis and Syrians to flee their homeland and the Eastern Catholic churches in the U.S. are seeing an increase of refugees arrive in their faith communities, said Chorbishop Michael G. Thomas of the Eparchy of St. Maron of Brooklyn, New York, a Catholic home mission diocese for Maronite Catholics living along the U.S. East Coast. Its territory stretches from Maine to Florida.

Like other financially strapped home mission dioceses, the eparchy scrapes together what little resources it has to assist these refugees in setting up their homes and sometimes in helping them find work, Chorbishop Thomas told Catholic News Service during an August interview in Raleigh.

Mostly, it’s the sense of community that these refugees are most in need of and the parishioners with Middle Eastern backgrounds are generous with their fellowship and resources, he said.

“They can relate with the culture and the food,” Chorbishop Thomas said. “But, just knowing another family who they can ask, ‘Where should I send my kids to school?’ or ‘Where’s a good place for me to move to?’ if they know of job opportunities. Those things are so important to find out from people they can trust.”

Faith communities in Raleigh were instrumental in helping Iraqi refugee John Youkhanna and his family upon their 2008 arrival in the Southern city.

Youkhanna too had been an interpreter in Iraq, but once he and his family escaped danger for refuge in the U.S., he work menial jobs to help put food on the table and pay the rent.

It was through his connections with the church that helped him eventually land a good-paying job with Habitat for Humanity, an organization that also helped him build an affordable house.

“I thank God for the people in my church,” Youkhanna said. “We’ve been able to build a whole new life here with their help. We’ve (also) been able to hold onto some piece of our culture, our customs and our old way of life.”

Welcoming the stranger and caring for the disenfranchised is a tenet of Catholic teaching, said Bishop Peter F. Christensen of Boise, Idaho, who is the former chair of the U.S. bishop’s Subcommittee on Catholic Home Missions.

In a time in the U.S. when some politicians have called for more restrictions on refugees and taken a populist stance to resist immigration reform, Catholic leaders have urged members of Congress to show compassion and hospitality for people in need.

It’s the role of a mission church in the 21st century to bring the warm embrace of the faith to the poor, the sick, the alienated and immigrants and receive them, as they would welcome Jesus Christ, Bishop Christensen said, even when those acts are contrary to public sentiment.

Father Carlos J. Gonzalez, a member of the Fraternal Society of Mercy, is heeding that call in the Diocese of Mayaguez, Puerto Rico, at the Belen Community, which shelters and cares for homeless men and women who have mental illness, AIDS and cancer.

“Some people say, ‘oh, come on, you’re giving breakfast to all of these people who should be working,’ or ‘they’re on drugs,’ or ‘they’re working the streets at night.’ I don’t care,” said Father Gonzalez, who is also a doctor. “I’m not here to judge them. I’m here to show them God’s love.”

Pope Francis has called on clergy to bring spiritual care to the sick, dying and disenfranchised.

The pope also has urged people of all faiths to welcome the stranger.

Aida Sarkisian says she has felt that embrace in her new home in the U.S.

“We are not strangers here,” Sarkisian said. “We have some people, they are taking care of us. It’s a blessing.”

Contributing to this story was Tyler Orsburn.

From gangs to God: In Ciudad Juarez, youth express hopes for papal visit 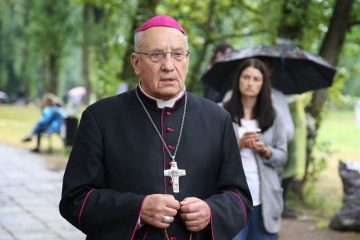