Mount Notre Dame student-athletes now have their own version of the famous Notre Dame grotto to visit and pray to in the corner of Sr. Dorothy Stang Field.

Thanks largely in part to the MND lacrosse program, the Blessed Mother now rests in the southwest corner of the field. Varsity lacrosse head coach Russell Mackey, who spearheaded the project, said it was two years in the making and the culmination of a lot of work hard work and dedication from a great deal of people that made this goal a reality at MND.

“After completing the athletic field two years ago, Mark Vonderbrink (JV lacrosse coach) and I were thinking and chatting about a few things after practice one night,” Mackey said. “We talked about how our lacrosse teams often met in the schools Chapel before games and how our field was truly special and how blessed we were to have a place on campus to practice and compete, and how it was made even more special by being named in honor of Sr. Dorothy Stang. We wanted to do something else to make this even more sacred, a holy ground in her honor. That’s when the idea for a Blessed Mary statue came to life.”

The coaches went to the MND administration and shared their idea. The administration loved it and Mackey and Vonderbrink put their idea into motion. Their plan was to fund it through personal donations and from money earned by the lacrosse camps they conducted in the summer. They also began searching for the perfect Mary statue. After a long search, they found one that met their vision, but there was a slight glitch.

“The Mary statue we found was made of marble….and carved in Italy,” Mackey explained. “It weighs over 500 pounds and would need to be transported to the United States. That’s expensive and we needed the right kind of podium to support it. So we needed a little more help to complete the project.”

They found that help in one of the parents of a player in the program, Jim Stradley, who donated his construction company’s labor. Using leftover bricks from the construction of MND’s concession stand, they were able to build the proper podium for Mary. They also received some additional financial support from five families that Mackey and Vonderbrink had become very close with, along with some additional assistance from MND varsity assistant lacrosse coach Gregg Eifert and his family, that gave them what they needed to complete the project.

Eight long months later, the Blessed Mary statue arrived at MND. The weekend the statue arrived, volunteers and members of the lacrosse program cleaned up the area where the podium was going to be placed. They spray painted the rusted sewer manhole cover, introduced some flowers and flower pots and a bench, and added a temporary cross behind and above the statue. After some intense and challenging moments lifting the 500 pound statue into place, Mary was erected and now sits in her special place at Sr. Dorothy Stang Field. The lacrosse program held a special dedication of the Blessed Mary statue right after school on April 9, the Feast of the Annunciation. Another special dedication for the general public was held during the final regular season game vs. Summit Country Day on May 10.

“Now we have a place at our field where student-athletes, parents, alumnae, guests and fans can say prayers and petitions to the Blessed Mother, and her son, Jesus Christ, and where we can proclaim our Catholicism,” Mackey said. “And perhaps most importantly, a place to help remind us to bring Jesus Christ into all our actions, for our student-athletes to always play and compete in a Christ-like manner and for parents, fans, etc. to act in a Christ-like manner.” 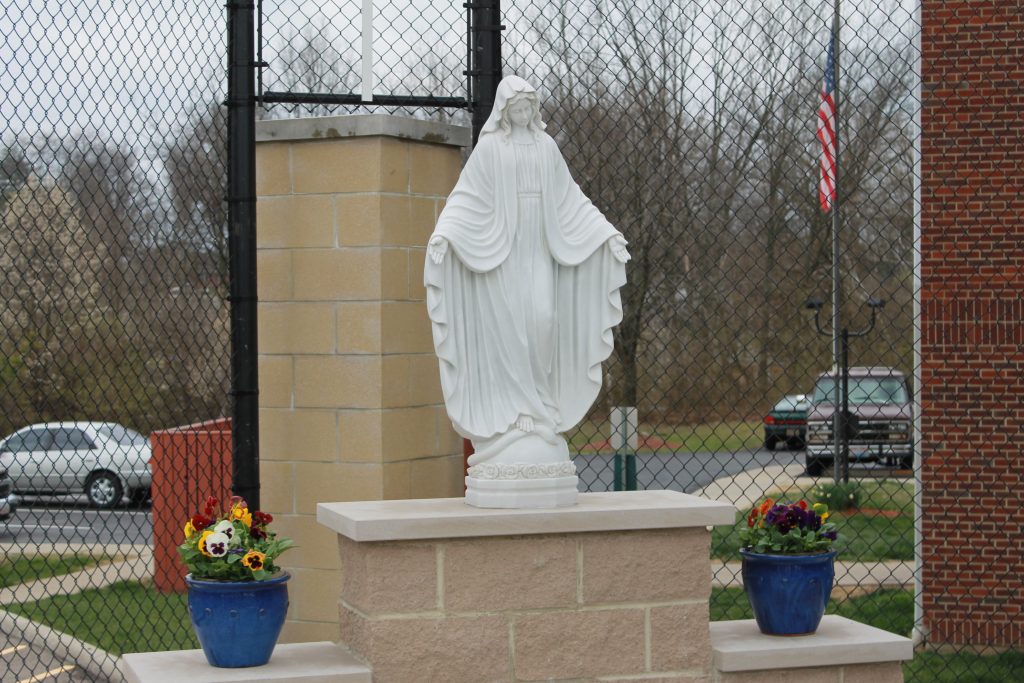