My Daily Constitution comes to Dayton

One Nation, in Sickness and in Health; What does the Constitution have to say about the Health Care Reform Bill?

A Constitution Dialogue will be held on Tuesday, July 24, 7-9 p.m. at SideBar 410, 410 East 5th St., Dayton OH  45402.  The Dialogue is organized by Linda Pollack, founder of My Daily Constitution in cooperation with League of Women Voters, GDA.  Discussion will be led by Richard Saphire, Professor of Constitutional Law, University of Dayton School of Law.  The event is free and open to the public. Complimentary Constitutions will be available.

My Daily Constitution (MDC) is a public conversation series regarding the U.S. Constitution and issues that face an open society. Through events which include Constitution Dialogues, marathon readings, high school debates, poetry slams, bus tours, and art exhibitions, My Daily Constitution engages the public in creative reflection about democracy from many perspectives. Constitution Dialogues, a signature of MDC, are designed to break away from the dynamics of the large lecture hall, and the invisible ‘wall’ of the panel discussion, to create a space where individuals and communities can become active participants in a dialogue about our democracy.

Constitution Dialogues are led by discussion leaders coming from the community, who will speak about the issues for a portion of the event. Thereafter the floor is open for questions, sharing comments and experiences, and for listening. The project brings together leading innovators, the People, and the U.S. Constitution, providing an opportunity for the U.S. Constitution to be brought to life through Constitution Cafés and other programming. The series has been held in Cincinnati, Los Angeles, New York City, Indianapolis, Claremont, and Seattle. Abroad, the series has been held in the cities of Gdansk and Wroclaw Poland.

My Daily Constitution started as a public art project by Linda Pollack, included in the exhibition “Democracy When?” at Los Angeles Contemporary Exhibitions in Hollywood in May, 2002. “The idea”, says Pollack, “is to break away from the dynamics of the large lecture hall and create a space where individuals and communities can become active participants in a dialogue about our democracy. Our Constitution, our democracy, is about interpretation– and interpretation means a collective, active dialogue, not just passive consumers and lawmaking producers. The U.S. Constitution is a living document, part of our quotidian life, influencing us in both large and small ways daily.”

My Daily Constitution comes to Dayton 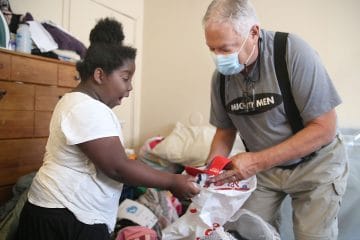