SPRINGFIELD — Ask Sherry Harkless what she has learned about her relationship with God during the RCIA process and her response is one that reflects both joy and faith. 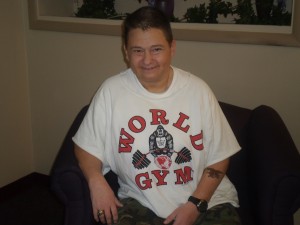 “God is wonderful and can do all things,” she said. “As long as you keep your faith and ask for forgiveness, He’ll always be there for you.”

A native of Delaware, Ohio, Harkless says God has always been there for her. Although her father was raised Catholic, “he didn’t want to force religion on me,” and “my mom took me to different churches,” Harkless said.

After graduating from high school, Harkless joined the Navy, following in the footsteps of her grandfather, who was a pilot during World War II.  Harkless served as an enlisted plane captain, preparing the cockpits of naval aircraft for flight and performing duties related to flight line operations.

“I did my job because I loved it, not because I had to,” Harkless recalled. “I was glad to be able to serve my country.”

She began attending Catholic Mass while on active duty, but her military career was cut short when a car accident left Harkless with severe head injuries. She still bears the scars from that accident and copes with frequent headaches and troubles with her vision.

Harkless speaks slowly and has short-term memory loss, yet hasn’t let adversity dampen her spirits or her faith. Now living at the Southbrook Care Center in Springfield, Harkless said she especially enjoys doing whatever she can to help her fellow residents.

Through it all, Harkless never forgot the meaningful experience of attending Mass in the Navy and when she saw a bulletin board notice about RCIA at St. Joseph/St. Raphael Parish in Springfield, “I was so happy. I’d wanted to become Catholic for a long time, but just never had the opportunity.”

Lisa Chiles, RCIA coordinator at the parish, said, “Sherry has been such a blessing to have in our group this year. We take turns picking her up from the nursing home and bringing her to class and Mass.”

Harkless expressed her gratitude for the support and prayers of St. Joseph/St. Raphael parishioners, especially Dan Hopper, her sponsor. “Everyone has really gone out of their way to help me, and Dan and his family have really been there for me,” she said. “I was a little nervous about RCIA at first, but Dan told me ‘don’t sweat it. You’re in God’s hands.’ That was good advice.”

“I’ve enjoyed learning about the Bible during RCIA and volunteering at a food pantry,” Harkless said. “That helped me realize how much God has given me and how important it is to be thankful for that. Helping others and giving them what they need is a way to show my thanks.”

As Easter Vigil approaches, Harkless is feeling “nervous, excited and happy. I’ve been waiting for this a long time and am happy God led me to the Catholic Church.”

Rite of Christian Initiation of Adults

The Catholic Moment: Beautiful and eternal