New Ohio Law Prohibits Abortion Because of Down Syndrome Diagnosis

Shortly before Christmas, Ohio Governor John Kasich signed a law prohibiting doctors from aborting babies that are likely to have Down Syndrome.

Prenatal tests used to identify likelihood of Down Syndrome often result in their mothers seeking abortions, even though false positives are not rare.

North Dakota and Indiana have similar laws, although Indiana’s was halted by a court not long after it was passed in 2016.

“Now that the Down Syndrome Non-Discrimination Act is law, unborn babies prenatally diagnosed with Down syndrome are given a shot at life” Ohio Right to Life President Mike Gonidakis said in a statement.

A statement from the ACLU in Ohio called the law “blatantly unconstitutional.”

The U.S. Supreme Court’s concurrent Roe v. Wade and Doe v. Bolton decisions in 1973 affirmed that abortion is legal for any reason in all states throughout all nine months of pregnancy, allowing states some leeway to regulate it in third trimester. Planned Parenthood v. Casey, decided in 1992, affirmed women’s right to abortion until “fetal viability,” which can now be earlier than the third trimester, but has led to no general changes in abortion laws.

The Ohio law calls for penalties for doctors or others who perform abortions because Down Syndrome is expected, but pro-life critics of the law say it will not be difficult for women or doctors to circumvent.

Don't confess other's faults, own up to sins, pope says at audience

New Ohio Law Prohibits Abortion Because of Down Syndrome Diagnosis 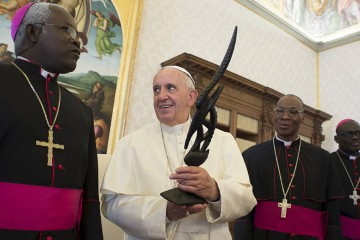