Washington D.C., Dec 9, 2019 / 04:00 pm (CNA).- Less than a year before the 2020 presidential election, a landmark poll of both Catholic and non-Catholic voters found that Catholics largely align with other American voters, representing a broad diversity of political perspectives and plans for the upcoming national election.

The poll, conducted Nov. 15-21 by RealClear Opinion Research in partnership with EWTN News, surveyed 2,055 registered voters; 1,223 of them self-identified as Catholic. Poll findings offer new insights into how Catholics plan to vote and what issues they value.

Since the “Catholic vote” generally tracks with the outcomes of national elections, the data likely offers insights into the direction campaigns could take and the issues that might be prioritized, especially in the weeks leading to the first presidential nominating contest, the Iowa caucus, scheduled Feb. 3, 2020. 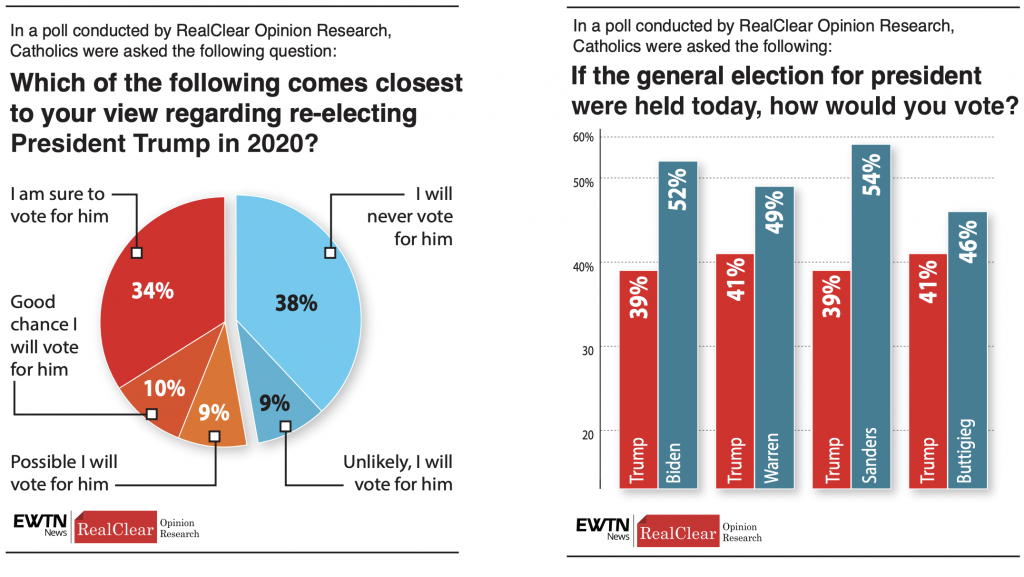 John Della Volpe, director of the RealClear survey, explained Dec. 9 that “with few exceptions, for generations, tracking the preferences of the Catholic vote has proven to be a shortcut to predicting the winner of the popular vote — and I expect 2020 to be no different.”

“Like the rest of America, the 22% of people who comprise the Catholic vote is nuanced and diverse. And like America, the diverse viewpoints based on generation, race, and ethnicity are significant and prove that no longer are Catholic voters a monolith,” Della Volpe added.

Democratic challengers to President Donald Trump look to fare well against the president in the 2020 contest, the survey found.

In hypothetical head-to-head contests, Catholics broke for former vice president Joe Biden 52% to 39% over Trump, similar to the 51% to 39% outcome among non-Catholics. Fifty-four percent of Catholic said they’d vote for Sen. Bernie Sanders in an election against the president, with 39% for Trump; the figures were 52% to 40% among other voters. Catholic voters said they choose Senator Warren, 49% to 41%, in election against Trump, while non-Catholics broke 50% to 41% for Warren.

In addition to preferring other candidates in the 2020 election, 55% of Catholics, and 54% of non-Catholics, said they support the impeachment and removal from office of Trump.

On national security, however, along with taxes, the environment, criminal justice, race relations, Supreme Court appointments, education, and foreign policy, Catholics and non-Catholics aligned within two points of each other. 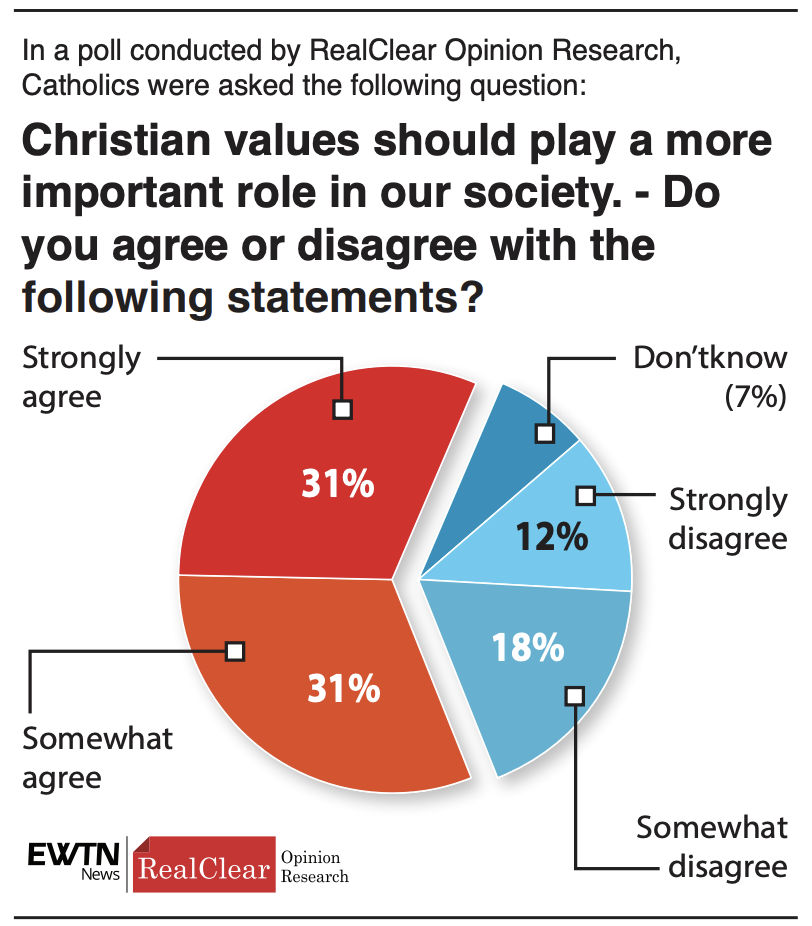 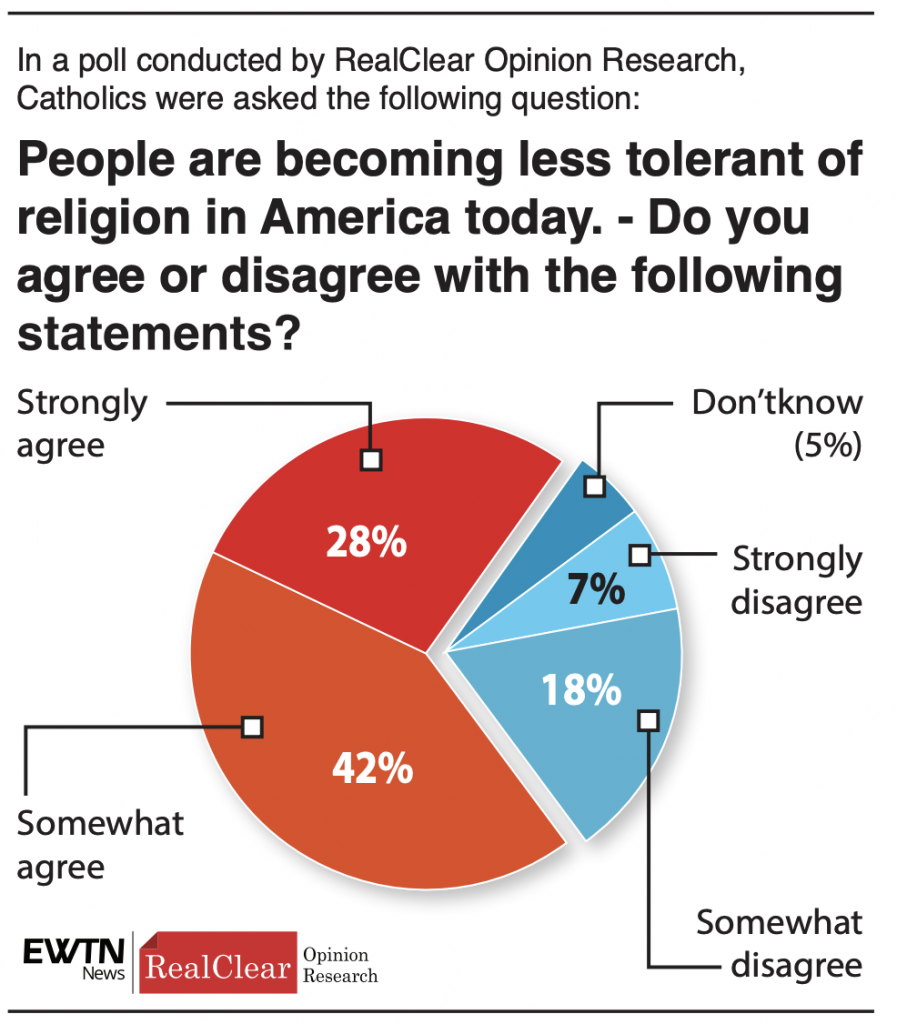 The survey also found that 37% of Catholics believe the U.S. is generally headed in the right direction, while 34% of non-Catholics said the same.

Robert P. George, the McCormick Professor of Jurisprudence and Director of the James Madison Program in American Ideals and Institutions at Princeton University, spoke Dec. 9 with EWTN News Nightly about the poll.

“There is not a Catholic vote, and there hasn’t been a Catholic vote in a long time. Catholics, in the aggregate, tend to line up on political questions pretty much the way the country does. There’s not any distinctive margin for Catholics being conservative or being liberal, or really, strictly speaking being Democrat rather than Republican,” George told EWTN News Nightly.

George pointed out that among Catholics, demographic groups vary widely in terms of partisan affiliation and political priorities.

Twenty-two percent of white Catholics consider themselves to be liberal, 36% conservative; while the opposite is true for Hispanic/Latinos, where 33% report being liberal and 26% conservative.

Fifty-four percent of white Catholics approve of Trump’s job performance, while 31% of Hispanic/Latinos Catholics do.

Fifty-eight percent of Catholics who say they accept all Church teaching also said they are “sure to vote” for Donald Trump in 2020, compared to 34% of all Catholics and 32% of respondents overall who gave the same answer. 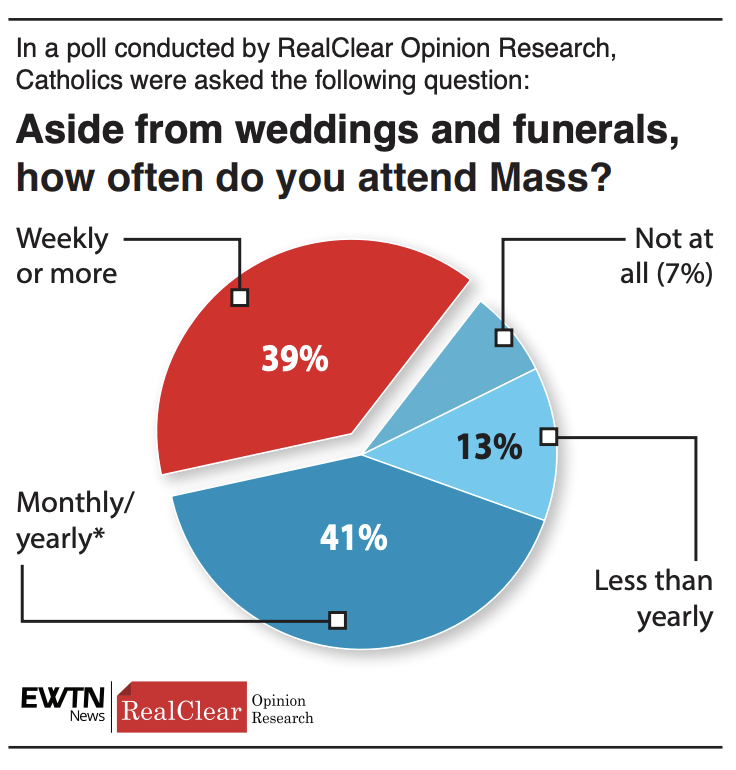