SIDNEY DEANERY — The 36th Annual Northern Area Congress for parish leaders and catechists, held at the Upper Valley Joint Vocational School in Piqua, drew an audience that spanned from teenagers to senior citizens. All came for the same reason: to discuss different ways to incorporate adolescents into the Catholic faith.

Leading the Sept. 17 conversation was keynote speaker Gregory “Dobie” Moser, the executive director of the Youth and Young Adult Minstry and CYO Office of Cleveland Catholic Charities. He earned his doctorate in ministry with an emphasis in leadership development. Additionally, he has written many resources on youth ministry and education.

Moser’s background framed the content of his talk, which was based on the title of the conference, “Drawing Adolescents and Their Families into a Life of Faith: A Practical Blueprint.”

His speech centered on the concept of building a house  — one’s life — with God as the architect. Architects, he said, know to ask the right questions in order to build the best structure possible. Moser reassured the audience that they are not expected to know God’s plan.

“Among the many good things in the Gospel, we don’t have to create the blueprint,” Moser said. “It’s given to us. But living it is no simple challenge.”

To illustrate his point, Moser showed the audience a video of a Bob Shumaker, a U.S. soldier who was a prisoner of war in Vietnam for eight years. During his imprisonment, Shumaker remained optimistic and focused on composing a detailed mental image of the blueprint of the house he eventually built for the wife and child he left at home.

At this point, Moser asked the crowd to take a moment to share with each other what resonated most with them about Shumaker’s story. For some, it was his hopeful outlook. For others, it was his faith in a plan that he did not know.

Shumaker and the other prisoners also developed a tap code, a Morse code of sorts, to communicate with each other. This communication, Moser said, is applicable in living out the blueprints God designed for His people.

“What are the tap codes of everyone we encounter?”Moser asked. “What is the connection of language that says what they are about? The idea of a tap code is earning the right to be heard.”

When drawing adolescents into the Catholic faith, communication is especially important. It is essential that young adults feel their voices are both heard and valued. Part of one’s blueprint is making sure every voice counts.

“Sometimes the wisdom of a blueprint can be amazingly simple,” Moser said.

He gave the example of a family of 10 refugees from Somalia for whom he was asked to find shelter for a month. Moser called his wife to ask if she knew anyone who could help, and she offered up their own home immediately, saying, “We can do this.”

Moser, who has seven children of his own, initially doubted his wife, but later realized, “In a way that went right by me, I learned ‘Open your hearts’ isn’t just a saying. God will take you up on this.”

The blueprint for him meant opening his home and working to include those in need. Likewise, Moser encourages the community to accept adolescents.

“At the end of the day, it’s about our young people knowing they belong,” he said. “We are incomplete without them, their gifts, their talents. Their love is not with us.”

When building a house, however, one must also take into account his or her personal landscape. For many, that means taking recognizing the values society teaches. Despite these values, which include consumerism as a means to find happiness, Moser said including adolescents is a way to guide them to live a more Christian life.

He also emphasized the commitment required to follow the blueprint. If you are building a house, he said. You can’t just abandon it halfway through construction. To commit to it, one must trust in God’s plan, no matter how uncertain he or she is.

Moser ended his speech with a litany that he described as unusual, but “appropriate for a Saturday morning.” In between prayer offerings, Moser asked the audience to join him in a resounding chorus of “Hip, hip, hurray!”

The crowd left feeling energized and with one of Moser’s closing remarks fresh in their minds: “We don’t know what the future holds, but we know who holds the future.”

After the keynote address there were three workshop sessions, allowing each participant to choose three workshops from a total of 31. Workshops were recommended for teachers or catechists of various age levels, as well as sacrament preparation, RCIA, education and worship commissions and general adult enrichment. Participants of various ministries found enrichment for their faith life and took home a clearer vision of their call to proclaim the Gospel.

Sunday Scripture: An invitation to the kingdom of God

Every Day Evangelist: Painting is a passion for artist 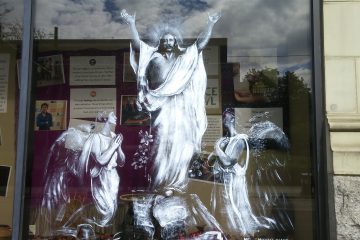