by JD Flynn and Kevin Jones

A former board member of a progressive Catholic political advocacy organization said Monday the group’s former executive director, who is now vying for a Congressional seat in Tennessee, defrauded the organization and eventually left it bankrupt.

“I’m speaking publicly now, with very little interest in scoring points. I’m simply here to speak on the record, to establish a fact pattern, to help explain to the public the disappointing experience I have had with Chris Hale,” said James Salt, a former board member of Catholics in Alliance for the Common Good, in a livestream announcement Aug. 3.

Hale is running in the Democratic primary in Tennessee’s 4th Congressional District. His opponent in that race, Noelle Bivens, hosted a livestreamed event with Salt on Monday evening, after local media reported that Hale is accused of misusing email lists from his former employer to fundraise for his own benefit.

Salt said the political advocacy group, which aimed to advance Democratic candidates and policy initiatives by appealing to Catholics, was financially and legally harmed by Hale’s leadership of the organization.

“My job is simply to be on the record saying he did a great disservice to everyone who has worked with him.”

After Hale was hired as executive director of Catholics in Alliance for the Common Good in 2013, Salt said, “we began to see a pattern of Chris obfuscating and avoiding any kind of accountability.”

Eventually, Salt said, Hale lied about filing financial records, and once told colleagues he was having surgery, which was apparently not true, in order to excuse missed work.

Hale was fired from the group in 2017, Salt said, and the group was dissolved. Hale disputed that he was fired, saying he left on good terms with the board, because he was ready to “move on and have different adventures in life.”

He is accused of leaving with the organization’s mailing and email donor lists, and using them after he was fired to fundraise for an initiative he started later that year, called The Francis Project.

According to documents obtained by the Murfreesboro Voice, Hale was asked repeatedly to stop using those lists for fundraising, but continued to do so as late as December 2019.

In a Jan. 24 letter to Washington, D.C’s attorney general, Lawyers for Catholics in Alliance for the Common Good, and the related Catholics United organization, said that The Francis Project was not actually a non-profit, but was instead a trade name connected to a Washington, DC for-profit corporation incorporated by Hale, and registered as “Christopher Hale.”

Catholics United said in its letter it was concerned that Hale’s previous affiliation with the group, “which supported policy initiatives consistent with Catholic social teachings, could mislead email recipients to believe they are making tax-deductible contributions to the Organization directly or to a similar religious nonprofit group.”

The group asked the District of Columbia’s attorney general “to review this matter and take all steps necessary to investigate and stop Mr. Hale from continuing his deceitful and fraudulent fundraising tactics.”

“Mr. Hale’s dishonest actions undermine the values of integrity and trust that are crucial in the charitable fundraising process,” the group said.

Hale told CNA Monday night that he did not take any lists from the organization. Rather, he said, he came in with a mailing list obtained from work he’d done before he was hired at Catholics in Alliance for the Common Good, and he’d been told when he was hired that he would retain ownership of that list.

He said that was the mailing list he used for his next project, The Francis Project, that he only added personal contacts after he began working at Catholics in the Alliance for the Common Good, and there were no addtions from his former employer’s database.

Hale said he made that agreement with Fred Rotondaro, who as chairman of the board at Catholics in Alliance for the Common Good, hired him. Rotondaro died in June 2017.

The Francis Project, Hale said, is “a small group of folks trying to build an advocacy group focused on young Catholics, millennial Catholics, in public life. It never really got feet under it because there was no one who wanted to do it full-time.”

Hale said the Francis Project sent out newsletters and spiritual reflections, and did “advocacy work, petition work especially, on particular issues of Catholic social teaching in the context of the Trump administration.”

“It was never intended to be a full-fledged group with wings beyond doing its humble work of putting out the newsletters, the daily reflections, some educational trainings and some targeted petition and advocacy work on particular issues that were of importance in Catholic social teaching.”

“We never filed as a non-profit because we never were a non-profit. We did advocacy work. None of our donations were ever considered tax deductible because they weren’t,” he added. Hale said that solicitations from the group did not suggest or imply that donations would be tax-deductible.

Hale said that he would consult with legal counsel, in response to a request from CNA to review the financial records of The Francis Project.

“It is a private organization, it is not a public non-profit.”

An archived version of the Francis Project website makes requests for donations, and opportunities to sign up for various mailing lists, including those mentioned by Hale.

Bivens, his primary opponent, said Monday night that she does not know if Hale will remain in the race. While she acknowledged that some in the district have voted already by mail, “going into a general with Chris Hale as the nominee would be a nightmare.”

Hale told CNA he has no plans to leave the race.

“With over 3,300 donors, 300 volunteers, 900 signs in voters’ yards, and top supporters in every precinct in this community, we are running the strongest grassroots campaign rural Tennessee has ever seen. We didn’t just out raise Congressman DesJarlais by a record-breaking 5:1 margin, we out organized him 100:1. The voters of Tennessee are hungry for a new Congressman who’ll bring hospitals, health care, good jobs, living wages, and generational change to Tennessee.”

“I’m going to win this this election on Thursday and then on November 3.”

Hale ran for Congress in the same Congressional district in 2018, but lost in the Democratic primary. He has been projected by some political observers to win the 2020 primary, but is generally not projected to unseat the district’s incumbent Republican congressman. The district is heavily Republican, and has been represented by physician Scott DesJarlais since 2011. DesJarlais won nearly 64% of the vote in the district’s 2018 election.

Hale said that he believes Salt’s motivations for making allegations against him are purely political.

“We’re three days out from an election. If this was such a contentious and bombshell legal issue, why is James waiting until three days before the election and then doing so in the context of a press conference with my opponent?”

Hale also told CNA Salt’s denunciation of him is ”intensely personal” and said that Salt was jealous of the work he had done with Catholics in Alliance for the Common Good. He also said he had faced challenges with Salt because they differed on policy, and that there was division within the organization over worldview and strategy.

The candidate is cofounder of the Millennial Journal, and worked in 2012 as part of the Catholic outreach team in the reelection campaign of President Barack Obama.

Salt himself has been involved in controversy surrounding Catholics United.

Ahead of the 2012 election, Salt, then-executive director of Catholics United, said in a letter to pastors of Florida Catholic churches the group had recruited a network of volunteers to monitor election-related speech in churches for reputed illegal political activity. Local Catholic leaders said this appeared to be “an attempt to silence pastors on issues that are of concern to the Church this election season.”

Eventually Florida’s bishops urged pastors not to sign a pledge circulated by the group to “keep politics out of the pulpits.”

Catholics in Alliance and Catholics United, which effectively merged in 2015, were both founded in the wake of then-Sen. John Kerry’s defeat in the 2004 presidential election campaigns. This loss was in part attributed to the failure of Democrats to sway religious voters.

In 2008 then-Denver Archbishop Charles Chaput charged that Catholics United had “confused the natural priorities of Catholic social teaching, undermined the progress pro-lifers have made, and provided an excuse for some Catholics to abandon the abortion issue instead of fighting within their parties and at the ballot box to protect the unborn.”

Catholics in Alliance itself received at least $450,000 in funding from the Open Society Foundations, then known as the Open Society Institute, from 2006 to 2010. An internal foundations document from 2009 cited the group’s key role in influencing Barack Obama’s controversial 2009 Notre Dame speech, and praised its campaigns that “broadened the agenda” of Catholic voters to see abortion as just one of several election issues.

Catholics United also received funding from the Gill Foundation, founded by savvy LGBT strategist and millionaire Tim Gill. The group was listed as a partner on the website of the Arcus Foundation, which has funded dissenting Catholic groups and other religious organizations to advocate on LGBT issues as well as for stricter limits on religious freedom.

Podesta’s email responded to Sandy Newman’s suggestion of a “Catholic Spring” revolution within the Church which, in Newman’s vivid words, “Catholics themselves demand the end of a middle ages dictatorship and the beginning of a little democracy and respect for gender equality in the Catholic church.”

Podesta, a former chief of staff for President Bill Clinton, replied: “We created Catholics in Alliance for the Common Good to organize for a moment like this. But I think it lacks the leadership to do so now. Likewise Catholics United. Like most Spring movements, I think this one will have to be bottom up.”

According to Open Society Foundations internal documents from 2009, the departure of Catholics in Alliance co-founder Alexia Kelley to join the Obama White House left the group “without strong leadership.” Kelley eventually became president and CEO of the influential philanthropy consortium Foundations and Donors Interested in Catholic Activities.

Commentary: Is anyone ‘ready’ for Christmas?

What did Pope Francis say about civil unions? A CNA Explainer 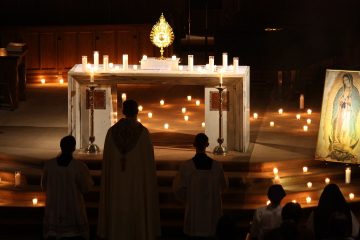