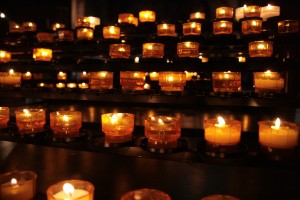 A Cheviot native, Father Klug attended St. Gregory Seminary and received a licentiate in sacred theology from the Pontifical Gregorian University in Rome. He was ordained on Dec. 8, 1951, at Our Lady of Humility Chapel, North American College in Rome, Italy, by Bishop Martin J. O’Connor.

Father Klug is survived by his brothers, Robert and Edward. Interment was at St. Aloysius Gonzaga Parish, Cincinnati.

Father Christopher Coleman
A Mass of Christian Burial for Father Christopher Coleman was celebrated July 14 at the Cathedral of St. Peter in Chains. Father Colemen, 50, died July 9 as the result of a car accident.
A native of London, Ohio, he received a bachelor’s degree in paper science and engineering from Miami University at Oxford and an MBA in marketing from Xavier University. Father Coleman received a M.Div. in theological studies from the Athenaeum of Ohio/Mount St. Mary’s Seminary of the West, He was ordained a priest on May 20, 2006, at the cathedral by Archbishop Daniel E. Pilarczyk.

Father Coleman received his first assignment on July 1, 2006, as parochial vicar of Good Shepherd Parish, Montgomery. On July 1, 2008, he was appointed pastor of St. Anthony Parish, Dayton, for a period of six years. He was elected to the Presbyteral Council for the Dayton Deanery and appointed a member of the College of Consultors of the Archdiocese of Cincinnati for a term of five years, 2010-2015. On July 1, 2014, Fr. Coleman was appointed pastor of the Winton Wyoming Pastoral Region (Our Lady of the Rosary Parish, Greenhills; St. James of the Valley Parish, Wyoming; and St. Matthias Parish, Forest Park) for a period of six years.

Father Coleman is survived by his mother, Barbara, and sister, Paula. A private burial service was held at the request of the family.

Father Glen Perin
A Mass of Christian Burial for Father Glen Perin was celebrated July 11 at Sts. Peter and Paul Church in Ft. Loramie. Father Perin, 89, died July 5 at St. Charles Center in Carthagena.
A native of Newport, Ohio, Father Perin did his preparatory studies at St. Gregory Seminary and studied theology at Mount St. Mary’s Seminary of the West. He was ordained on May 30, 1953, at St. Monica Cathedral in Cincinnati by Archbishop Karl J. Alter.

On Aug. 29, 1963, he was appointed assistant pastor at Nativity Church, Cincinnati, and part-time teacher at Regina High School, where he remained teaching until June 1966. He was appointed assistant pastor at St. Jude Church, Bridgetown, on June 16, 1967, and in August of that year, to the additional position of part-time teacher of religion at Seton High School. On June 21, 1968, he was relieved of his assignment at St. Jude Church to make necessary preparations for missionary work in South America. He provided weekend help during that summer at St. Louis Church, downtown Cincinnati.

He is survived by his sister, Rosalie DeLoye. Interment was in Sts. Peter and Paul Church cemetery.

A Mass of Christian Burial for Father Robert Buening was celebrated July 17 at Corpus Christi Church, Cincinnati. Father Buening, 86, died July 11 at Western Hills Retirement Village.
A Cincinnati native, Father Buening did his preparatory studies at St. Gregory Seminary and studied philosophy and theology at Mount St. Mary’s Seminary of the West. He was ordained on May 31, 1958 at St. Peter in Chains Cathedral, Cincinnati, by Archbishop Karl J. Alter.

Father Buening is survived by his sisters, Wilma Peaker and Betty Nortmann, and brothers, Jack and Tom. Interment was at St. Joseph Cemetery.

A native of Denver, Sister Jean Patrice earned a bachelor’s degree in mathematics from the College of Mount St. Joseph; a master’s in education from Creighton University; and a Ph.D. in administration from the University of Colorado in 1967. She served as director of research at the then College of Mount St. joseph, and was elected to leadership in her congregation.
Sister Jean Patrice was elected president of the College of Mount St. Joseph (now Mount St. Joseph University) in 1977, a challenge she welcomed, ministering there until 1987. She advanced the mission of the college to serve a broadened audience of students, putting the Mount on a new course and establishing financial solvency for the institution. She developed mentoring partnerships between the community and at-risk high school students. Under her presidency, the Mount extended its liberal arts, career-oriented mission to women and men of all ages, mothers returning to college after raising their families, and minority and low-income students. She expanded the college’s reach to serve the needs of the community by starting the first weekend college program for adults in Cincinnati. She put in place a program called Project EXCEL, which today continues to provide educational and emotional support for students with learning disabilities to succeed in college. Her response was to develop a high school mentoring program and summer residency experience for Cincinnati-area African-American students called Project SCOPE, which also continues today.

Under her leadership, Sister Jean Patrice met with government officials and educators in seven Asian countries to discuss international education and student exchange opportunities; she was awarded the highest honor given by Sangmyung Women’s University in Korea for contributions made to further women’s education. She is widely credited with building the Mount’s institutional visibility, partnering with the broader business community and almost doubling the enrollment at the end of her 10-year tenure.
During the 1980s, and throughout the 1990s, Sister Jean Patricia served on the board of directors for a number of local organizations. She was honored by having the new student center at the College of Mount St. Joseph named after her at its dedication in 1998.

Sister Ruth Ann graduated from Our Lady of Cincinnati College with a bachelor’s degree in education. She went on to earn a master’s in education (administration) from Xavier University. A dedicated educator for many years, Sister Ruth Ann served at St. Francis de Sales, St. Henry (Dayton), Sr. Ursula Villa, St. Monica, and Our Lady of Visitation. Her other ministries included serving the Ursulines as house coordinator, directress of the temporary professed, and superior. She also taught CCD at St. John (West Chester), assisted with the St. Ursula Villa pre-school class and after school care program, and volunteered at Mercy St. Theresa.

Sister Ruth Ann is survived by her sister, Ursuline Sister Mary Lawrence Hartmann, and brothers, Bernard, Lawrence, Richard and Thomas. Interment was at Gate of Heaven Cemetery in Montgomery.