Brother Joseph Haley OFM is remembered by many for his service at Roger Bacon High School, died Feb. 26, 2019 at St. Margaret Hall.

Br. Joe, who spent most of his ministry in business and accounting work, was 75 years old and preparing to celebrate his 50th anniversary as a friar. Born to Paul and Genevieve (Tuttle) Haley on January 30, 1944 in Dayton, Ohio, he was the eldest of eight children, and attended Holy Angels Elementary School in Dayton, Chaminade High School, Dayton Junior College and the University of Dayton before entering the Franciscan formation program at St. Joseph Brothers’ School in Oldenburg, Indiana, in 1965.

Throughout his life, Joe was a meticulous worker until Parkinson’s disease took its toll and he retired from active ministry in 2016.

Brother Joe’s body will be received at St. Clement Church in St. Bernard, Ohio, on Monday, March 4, at 5 p.m. The Mass of Christian Burial follows at 6:30 p.m. Interment will take place Tuesday morning, March 5, at 10 a.m. in the friars’ plot at St. Mary Cemetery in St. Bernard, Ohio. Memorial donations may be sent to FriarWorks: Franciscan Ministry & Mission at 1615 Vine Street, Cincinnati, OH 45202-6400. Hodapp Funeral Homes is serving the Friars.

Give up gossiping for Lent, pope suggests

Being Pro Life: Racism Is an Issue of Dignity 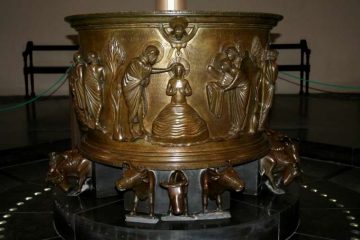