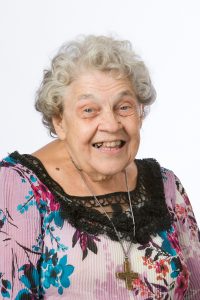 Sister Frances Mary was born Marguerite Rose Schoenung. She and her twin sister were the fourth and fifth children and eldest daughters of what would grow to be a household of 12 children, two loving parents and their Aunt Marney. Marguerite and her sister had many happy memories of growing up just down the street from St. George Church. It was at St. George School that they met and quickly came to love the Sisters of Notre Dame de Namur. Both her family and the Sisters instilled in Marguerite a deep devotion to the Sacred Heart and the Eucharist.  The call to religious life was solidified in the 2nd grade as the twins made their First Communion. Marguerite later described the experience: “When I made my First Communion I just felt that was what God wanted me to be, that I would belong to Jesus, I don’t think anything is more important than that. I just felt like I fell in love with God.” After Marguerite and her sister finished their education they worked for three years to help ease the family’s financial burden. Marguerite worked as a secretary in the advertising department of Red Tap Brewing Company and took college courses to help prepare for her ministry of teaching.

By spring of 1951 their youngest siblings were well on their way to finishing school so Marguerite and her sister made plans to enter the Sisters of Notre Dame de Namur. The entrance application asked why Marguerite wanted to enter Notre Dame. She wrote: “The reasons for my choice of Notre Dame are several: 1) I was acquainted with this order more than any other, 2) It is a teaching order dedicated to the education of the poor, 3) the devotion to the Sacred Heart of Jesus practiced by the order, 4) its simplicity.” The day the twins entered Notre Dame all of their siblings took off from school or work so they, with Mom, Dad and Aunt Marney, could accompany the twins to Mt. Notre Dame in a strong show of love and support that continued through the years.

As postulants, Marguerite and her sister became part of a band of 14 women who were encouraged by the Mistress of Postulants not to compete with one another but to love one another. They took her advice to heart and soon named themselves the GGG – the Greatest Group Going. Letters, phone calls and regular reunions have kept them close through the years. As a novice Marguerite received the name she was known by for the rest of her life: Sister Frances Mary of the Sacred Heart.

Sister also began her teaching career as a novice when she was sent to Villa Park to replace another teacher. When she expressed concern at not knowing what to do, the Mistress of Novices assured her that there were two other young Sisters in the community who would help her with lesson plans, etc. To Sister Frances Mary’s dismay those two Sisters told her they had no more training than she did! The Holy Spirit helped all three of them get through the year. The following year Sister Frances Mary was moved to another school where, she said, the principal “taught me more than I ever learned in college about teaching.” The experience helped Sister Frances Mary find what she described as “the joy of teaching.” She claimed after that first year she never felt teaching was really work because she loved it so much. Sister was famous for a math teaching technique that included cheers from the students and a science technique that put information into a song. An excellent teacher, Sister Frances Mary quietly and calmly handled her classes, giving plenty of attention and praise to students. When she had the opportunity to choose where she would teach, she consistently choose inner city schools. She always tried to provide the caring, listening attention her students needed. In 1999 Sister Frances Mary received the Miami Valley Catholic Education Council Teacher of Excellence Award in recognition of her 46 years of full time teaching.

Sister Frances Mary and her twin, Sister Marguerite, were extremely close. For 17 years after novitiate they were missioned to separate house, and often in separate cities. In 1971 Sister Frances Mary was given the opportunity to move to Holy Family Convent in Dayton while continuing to teach at St. Helen’s. She was delighted to be in the same community with Sister Marguerite. The two sisters were best friends and thanked God for the blessing of being able to live in the same community. Sister Frances Mary claimed they had never had an argument. The twins described it as “our together way to God.” Journeying life together with God, they believed, allowed them to do many things that they might not have been able to do separately.

For 25 summers the twins extended their teaching to the neediest children in Cincinnati’s Millvale neighborhood where, through the Practical Family Living Center, they organized field trips, arts and crafts programs, and did some reading and math tutoring. In 1997 the twins began tutoring in the summer program at Corryville Catholic School. It was a natural transition in 1999, when they left full time teaching, to continuing tutoring at Corryville Catholic. For two years they served as full time tutors through the Notre Dame Mission Volunteer AmeriCorps Program. Sister Frances Mary continued tutoring at Corryville through 2015.

During their years at Holy Family Parish, the sisters worked together every Friday evening to clean the church and take care of other work in the sacristy. At their golden jubilee one parishioner said, “The piety, humility and dedication of these extraordinary women exemplify the characteristics of the hundreds of Sisters who have taught East Dayton children ….” Besides her work in the sacristy, Sister Frances Mary served as a lector and Eucharistic Minister in the parishes where she lived, helped train servers, oversaw safety patrol and was the moderator for the 7th and 8th grade sodality.

Another “together” experience was the deep devotion of the twins to their niece, Francie. While they were devoted to all of their family, Francie was Sister Frances Mary’s godchild and a special needs child. From her birth the twins accepted and loved her totally. When Francie was 10 her mother left. The twins had already been offering emotional support and weekend help to Francie’s dad, a role they continued as long as they were able. When they moved to Cincinnati in 1999 the twins were given permission to live with their younger sister, Ruth, who had followed her own call to the religious life as a Sister of St. Francis. Ruth lived in a house owned by Francie’s father, Tom. Francie would join her three aunts for weekends and return home during the week. After Ruth’s death the twins continued living in the house and spending weekends with Francie for as long as they could.

Sister Frances Mary loved community life. Asked to name memorable experiences she listed First Vows, Perpetual Vows and all her jubilees because, she explained, “I am so happy and privileged to be an SND!” Sister was a great conversationalist and loved any kind of community gathering – even meetings. She was inspired by her Sisters in community. She appreciated their support and willingness to share life with her, especially moments when spirituality was shared. She was grateful for what she had learned from Sisters she ministered with – both those older and younger. She was also inspired by many of her co-workers who were so dedicated to the ministry of teaching and so deeply loved the students. Sister loved to read, sew and watch T.V. game shows. She had an excellent memory. One year on retreat Frances Mary and her sister memorized the entrance date of every Sister in the Province so they could pray for each one by name on their anniversary. It was one more way to be with one another in community.

Sister Frances Mary appreciated how the changes in religious life brought about by Vatican II deepened her interactions with parents of children she taught, made her work at Millvale possible, enabled her to have closer relationships with her family and coworkers, and made it possible for her to spend with Francie. As Sister Frances Mary put it, the convent was “so much more incarnational” after Vatican II. She truly experienced God among her Sisters, family and all those with whom she worked. At the time of her 60th jubilee she wrote, “God has been so good as to let me show the children His love by my caring for them. He gave me many loving, caring, supportive Sisters in Notre Dame. Most of all, God has given me the gift ‘that surpasses hope or thought,’ the Eucharist by which Jesus shares His life with me sacramentally.”

Her family was Frances Mary’s first community. She loved them and they loved her. Frances Mary was thankful for the many ways she was able to stay connected with them when she could no longer drive, especially for their regular visits. It was a special grace that good Sister-friends and some of her family members were able to be with her when Frances Mary was called from this life. God has been so good to us, her family, friends and Sisters of Notre Dame de Namur, by sharing His Goodness with us through the life of Sister Frances Mary. As we gather to celebrate her life, we pray for her, as we know she continues to pray for us, in the words of St. Paul:
“Rejoice in the Lord always. I say it again: rejoice. Your kindness should be known to all. The Lord is near. Have no anxiety at all, but in everything by prayer and petition, with thanksgiving, make your requests known to God. Then the peace of God, which surpasses all understanding, will guard your hearts and your minds in Christ Jesus.” (Philippians 4:7-11)