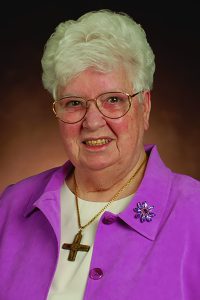 Ancestors of Joyce Hoben moved from Maryland to Kentucky in the 1790s and early 1800’s. There, they put down deep roots and helped build up the Catholic faith. Both of Joyce’s parents were well educated and skilled in music and literature. Joyce was the youngest of the Hoben’s seven children, and shortly after she was born the Great Depression started creating great hardship for the family. Her parents moved first to Indiana and then to Ohio, in search of better opportunities for their children. Joyce later wrote about them “…. Loving parents who taught us to make the best of the depression and to constantly keep in mind that God was watching over us.” Joyce talked of her mother spoiling all her children and of herself being spoiled by Mom and her older siblings. Joyce’s father, formerly a bookkeeper and merchant, worked as a tool maker to support his family.

In Dayton, Ohio, Joyce attended Julienne High School which was staffed by the Sisters of Notre Dame de Namur. She never considered a vocation until her junior year. Joyce needed a break from study hall so she asked to get a drink of water. As she was taking the drink, the thought entered her head: “I think I’ll be a Sister.” She laughed at herself: she was looking for a way out of study hall, not for a vocation. But the vocation stuck. Joyce asked for an entrance application. Her mother’s family was surprised. An aunt, many generations back, had been one of the first Sisters of Loretto at Nerinx, Kentucky, and another had later served as superior. They asked Mrs. Hoben why Joyce didn’t enter Loretto. Mrs. Hoben responded, “She didn’t know you.” Joyce did know the Sisters of Notre Dame, and she entered the community after graduating from high school in 1947.

Joyce was given the name Sister Mary Raphael and that is how she would be known until 1968 when she choose to go back to her baptismal name. Her years in ministry would focus on four distinct areas. The first was formal education. Over the course of 24 years Joyce taught, served as principal, as diocesan supervisor, and on the Educational Development Team for the Diocese of Detroit. Joyce was soft spoken, an introvert, and able to see the larger picture without losing sight of the individual pieces. When she spoke, her words were non-threatening. She tried to respond, rather than react, to situations. In the classroom, the softness of her voice itself was a discipline tool, as one needed to be quiet to hear her. These qualities worked to her advantage in working with children, parents, teachers, administrators and peers.

The same qualities would serve her well in the second area of her ministry: leadership in her community. Joyce had served six years as local superior when the province called her to serve on the Province Leadership Team and take responsibility for the Office of Ministry. In that role, Joyce worked with sisters to evaluate their effectiveness in ministry and discern their ministry choices. Later, Joyce wrote about her belief that “God’s gifts and blessings are so tailored for each individual.” For six years, she helped sisters articulate their gifts and see how God was calling them to use those gifts to make the world a better place. Then the Province asked Joyce to serve as Provincial. It was a natural choice because, through her work in the Office of Ministry, the sisters already knew and trusted her.

One of Joyce’s responsibilities as Provincial was to visit each sister once a year. She later said she loved doing the Visitation because it was not only a right of the sisters, it was a privilege for her as she entered into each sister’s life in a deeper way. The sisters also deepened their knowledge of Joyce. At the end of her first term as Provincial, they asked for it to be extended by a year. The Congregation was approaching a General Chapter and the agenda was the revision of the Constitutions. The sisters in Ohio wanted Joyce, with her many gifts and her deep knowledge of the province, to be there. Joyce accepted the call of the province, and would accept it again when they called her to serve a second term. The letter from the Congregational Leadership confirming her appointment summarizes Joyce’s style of leadership:

This appointment has been made after a careful study of the consultation papers forwarded to us from the members of the province. The sisters have prized highly your service over the past four years. They feel you have internalized the principle that “government exists to foster the life and mission of the Congregation in the spirit of Julie”, and that you have concretized the belief that ‘the ways in which we govern ourselves witness to justice”. Many sisters noted in particular your respect for and availability to each sister, your excellent communication on all matters of moment, your ability to involve the province in decision-making. Many also expressed high expectations that you will lead them faithfully in the implementation of the Constitutions and Directory. We feel their hopes are well founded.

In 1984 Joyce saw a new opportunity for the province not only to ‘witness to justice’ but to work for greater justice in the world. In an informal conversation with a Sister of Charity focused on the need for religious congregations to stop working separately and begin working collaboratively in justice and peace work. From that conversation the Intercommunity Justice and Peace Center (IJPC) was founded by five orders of religious, including the Sisters of Notre Dame de Namur. As IJPC prepared to celebrate its 35thanniversary, Joyce was interviewed. She reminisced, “I really could not give much presence because I was provincial but the Team approved the opening of the Center.”

During her time on the Team, Joyce also saw an opportunity to create a place for the Ohio Sisters to relax and refresh themselves. She and her Team lead the discernment process that ended with the province decision to purchase a vacation house at Lake Lorelei. It continues to be used for meetings, retreats, days of recollections, holiday gatherings, and in many other ways to support the mission of the province.

When she finished her second term as provincial, the province expressed deep gratitude and blessing to Joyce as she started the third phase of her ministry: Canon Law. Part of her interest in Canon Law was the fact that a revised code was promulgated in 1983. She had dealt with parts of it in her role as provincial, and knew the Church needed good Canon Lawyers. In one year, Joyce earned the equivalent of her Bachelors and Masters in Canon Law and served an internship with the Metropolitan Tribunal of Chicago. The Tribunal was impressed with her work and sponsored her second year of study which earned Joyce a Licentiate of Canon Law. In June of 1990, she was appointed Judge/Defender of the Bond for the Chicago Matrimonial Tribunal by Cardinal Bernadine. In addition, Joyce served the Archdiocese of Chicago through her memberships on the Personnel Advisory Committee (representing employees of the Archdiocese) and the Committee for the Advanced Study for Priests, through participation in educational programs for Field Advocates, and through occasional presentations at parishes and for other diocesan programs. Joyce also conducted investigative reports for the Cardinal and was appointed to serve on the Reconvened Commission for Clerical Sexual Abuse with Minors in June of 1995.

By July, 2000 Joyce’s four oldest siblings had died, and only Kitt and Bill were still living. Neither had families of their own and both were in need of some looking after. Recognizing it was her turn to spoil her siblings, Joyce made arrangements to continue her work with the Tribunal from a distance and moved to Dayton. For 10 years she continued to serve as adjunct professional staff for Chicago and she also gave some part-time service to the Tribunal of Jackson. By 2011 both Kitt and Bill had died and Joyce moved to Mt. Notre Dame Health Center where she continued part-time Tribunal work until 2017. At Mt. Notre Dame the fourth phase of Joyce’s ministry began: a ministry of prayer and presence.

Joyce served the broader SND world through her contributions at three General Chapters and by representing the Ohio Province at the 1979 International Planning meeting. She was faithful to her TEP group and Circle of Conversation, and served on numerous Province committees, the annual Assembly, and numerous school boards. In community, Joyce readily shared her organizational skills, her ability to listen, her creativity and her humor. She gently encouraged and affirmed younger members, encouraging them to trust their experience of God and calling them to recognize and grow their gifts for service to God’s people. Joyce honored her Kentucky roots by celebrating the Derby and insisted that an authentic Derby party had to have real Mint Julips. Joyce was an avid reader, enjoyed good music, a good game of scrabble and spending time at Lorelei. She enjoyed following developments in technology and learning new skills to utilize those developments. Joyce enjoyed exploring new ideas, and the last few years of her life she focused on studying the New Cosmology. Perhaps rooted in memories of her mother laying on the grass with her and pointing out constellations, Joyce loved exploring the development of consciousness, evolutionary theories and deepening her awareness of growth around her.

When asked to identify her favorite thing to do, Joyce named spending time with friends and her beloved family. Besides her siblings, she enjoyed wonderful relationships with her nieces and nephews. The greatest loss for her, when she gave up driving, was giving up her independence to go and visit them. Joyce was so grateful for the time they took to come and visit her. Asked once why she stayed in religious life when so many others were leaving, Joyce wrote: “‘…where your treasure is, there is your heart also.’ (Mt 6:21) So many of my treasures have been found in Notre Dame – a growing intimacy with God, a continual shaping and reshaping of God’s image for me; inspiring women; close friends; the struggle to adapt with the Church and to appreciate the treasures of its history, tradition and Word.” Joyce volunteered to be interviewed during the Apostolic Visitation. It was an opportunity to share her treasure, and share she did. The visitatrix responded with questions and comments: “How did you do this?” “How did you accomplish that?” “You seem so close to one another!” Joyce’s reply was, “How good God has been to us!”

Her sisters, family and friends echo those words even as a global pandemic prevents us from gathering as we traditionally would to celebrate Joyce’s amazing life. Even in this experience, Joyce is lovingly calling us to stretch and grow, staying focused on our loving God and the signs of the times. United in the Heart of our good God, we give thanks for the gift Joyce has been to each of us. We count on the gift she will continue to be to us in the Communion of Saints, and we ask her prayers for us in this difficult time. We thank God for all the ways Joyce faithfully responded to the call to serve. We thank God for Joyce’s very presence that made God’s goodness known to so many in such varied situations, and we sing with her:

Out and About in the Archdiocese of Cincinnati January 2023