Ohioans can take pride in papal visit to Washington

Editor’s Note: The pope’s U.S. visit, his historic speech to Congress and his appearance at the Conference on Families in Philadelphia will be covered Sept. 22-29 by Sister Eileen Connelly OSU, news editor of The Catholic Telegraph, and Menachem Wecker, a Washington-based freelance journalist who reports on religion topics.

By Menachem Wecker
For The Catholic Telegraph

WASHINGTON, D.C. – One of the 100 sculptures in the U.S. Capitol’s Statuary Hall, around the corner from House Speaker John Boehner’s office, depicts Father Junipero Serra in bronze. California gifted the work by artist Ettore Cadorin in 1931, celebrating the 18th century Franciscan friar “recognized as one of the most important Spanish missionaries in the New World,” according to the website of the capitol architect.

The juxtaposition of the sculpture and the speaker’s office will take on new significance on Sept. 23, when Pope Francis canonizes Father Serra during a Mass at the Basilica of the National Shrine of the Immaculate Conception at Washington’s Catholic University of America. The papal visit to the nation’s capital Sept. 22 to 24 will be the culmination of decades of the speaker’s efforts to bring a pope to the District to address Congress, which, along with the canonization of a saint on U.S. soil, will be a historical first.

“It is definitely a major accomplishment for the speaker. He is a faithful Catholic and a man of deep faith,” said Marianist Father John Putka, a friend of the speaker’s of 30 years and a retired political scientist, who taught at the University of Dayton for two decades.

“He has been working for this since the papacy of Pope St. John Paul II, and this time he has achieved his goal,” Father Putka said. “Ohioans can take pride that the Speaker of the House, second in line for the presidency, is from Ohio, and can rejoice in his success in getting Pope Francis to address Congress.”

The pope, whose Washington trip will include a private meeting with President Obama at the White House and who will address the United Nations in New York, will welcome the chance to speak truth to power, Father Putka predicted.

“He is a pope from the third world visiting the most important country in the first world,” he said. “My expectation is that he will define some of the fundamental moral crises confronting us and reminding us that we are all part of the human race and have a shared responsibility to others, a message as old as Christianity itself.”

In an exclusive statement, Boehner told The Catholic Telegraph that the papal visit carries special significance to him.

“Anytime you have a pope come to the United States, it’s humbling, but welcoming a Jesuit pope makes it all that much more meaningful to me,” Boehner said. “His teachings, prayers, and very example bring us back to the blessings of simple things and our obligations to one another — those are the values I learned growing up going to Mass every day and from going to Xavier.”

That Ohioans, Catholic school students and teachers, and visitors to the U.S. Capitol will have the opportunity to participate in Pope Francis’ “historic visit” is “very special,” he added.

The pope’s addresses during his visit are sure to touch on the economy, and Brian Engelland, interim dean of Catholic University’s School of Business and Economics, believes the pope’s remarks will address two major concerns about the global economy, which he has already articulated.

First, Engelland said, the pope will say that a good economy must build up the common good, and he will criticize the “throwaway culture,” which “wastes the lives of babies through abortion, wastes the potential of youth through unemployment, and wastes resources through consumerism.”

The pope tends to speak from his heart about weak areas of the economy, particularly those that hurt the health of families and the poor living in underdeveloped countries, according to Engelland.

“Pope Francis readily admits that he is not an expert in economics,” he said. “He challenges all of us by asking, ‘Is this really the best that we can do?’ He speaks from his own experience living in Argentina, an economy that is dominated by corruption and crony capitalism, and Italy, one of the most overregulated and over-taxed economies in Europe. Both fall well short of the free enterprise ideal we value in the United States.”

At a recent panel at a conference for Catholic CEOs, Engelland found that the chief executives realize that the pope speaks as a theologian, not an economist, and “they forgive him for making comments that may not be phrased in ways that appeal to economically-trained ears,” he said. “In the main, these CEOs understand the pope, admire his conviction, and are receptive to his comments and approach. His personal magnetism gets their attention and wins them over even when the message he brings may not be as balanced or as complete as they would like.”

Catholic Ohioans worry about the lagging U.S. economy and they tend to ignore “Inside the Beltway” developments, “because they’ve learned that political posturing has little impact on day-to-day life,” says Engelland, who holds master’s degree in business administration from the University of Cincinnati.

This Washington development is different, though, according to Engelland. “The pope’s visit is an occasion for which everyone should pay attention,” he said. “Even my non-Catholic friends admit that they are jealous of our pope and his media status. To borrow the E. F. Hutton tag line, ‘When the pope speaks, people listen.’”

And, Engelland believes, the visit may achieve the Washington holy grail of impacting policy.

“What he says will encourage politicians to incorporate some Catholic ideas about restructuring aid and improving the economy into their political speech and legislative efforts,” he said. “These ideas will likely influence debate in the coming presidential campaign.”

This feature originally appeared in the September 2015 print edition of The Catholic Telegraph.

Pope Francis will arrive to Cuba as a 'missionary of mercy'

Ohioans can take pride in papal visit to Washington 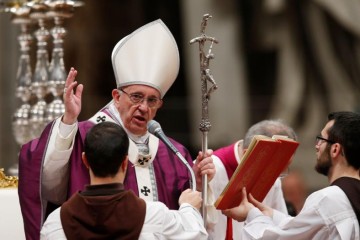