Pew survey: Half of U.S. Catholics pray every day, and the number is dropping

A new survey of U.S. adults found that 51% of Catholics pray every day, down from 59% from 2014. Meanwhile, the portion of Americans with no religious affiliation continues to rise.

Those are some of the highlights of a new Pew Research Center survey, which focuses on changes in the U.S. religious landscape. The responses show that much of America is still religious, but significantly less than it once was.

All of America’s religions have recorded downward trends in various categories — except for the “nones.” 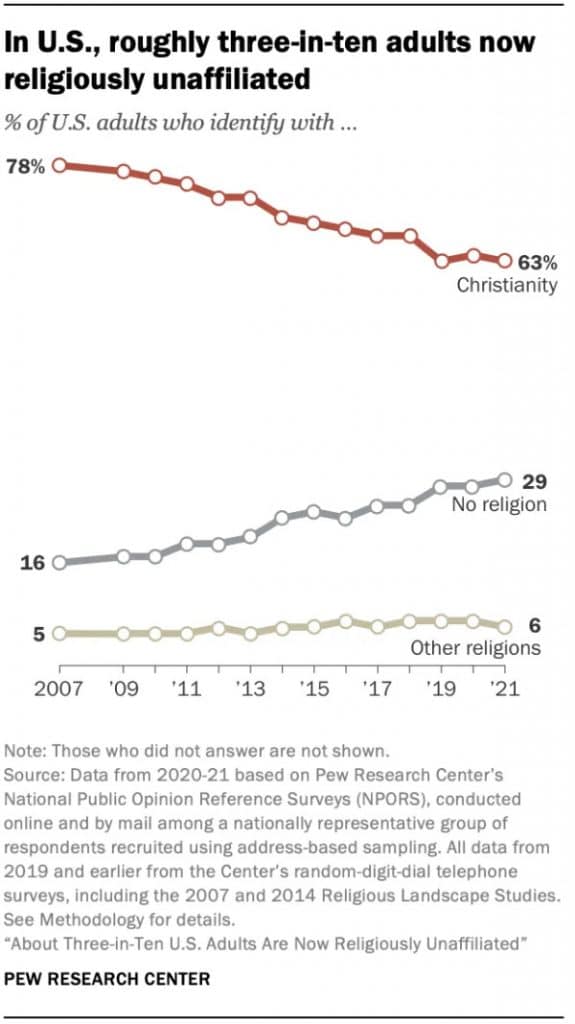 While the “nones” grow, Christians shrink. Currently, the Christian population, which includes Catholics, Protestants, the Church of Jesus Christ of Latter-Day Saints, and Orthodox, makes up 63% of the overall U.S. population, Pew reported.

While the Protestant share of the population has experienced a decline of 10 percentage points over the past 10 years, those identifying as Catholic have remained “relatively steady,” the survey found.

While 20% of Catholics say they don’t pray or seldom pray, the other 80% pray more regularly.

Although just 51% of Catholics pray every day, 29% reported praying weekly or monthly, Pew found. Much of that prayer must be happening at home or somewhere else each week, though, because only 26% of Catholics report attending religious services at least once a week. 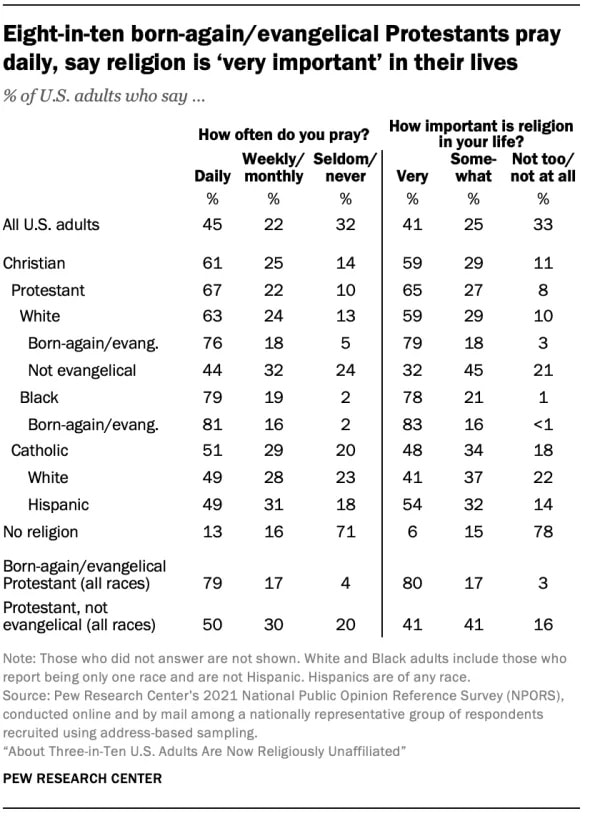 Rating the importance of religion

Religion is very important in the lives of 48% of Catholics, the survey found. That’s down by 10 percentage points from 2014.

A little more than 3 in 10 Catholics say religion is somewhat important to them, identical to the number in 2007.

For almost one-fifth of Catholics today, religion is not too important or not at all important, Pew’s survey shows. That’s up from 10% in 2014.

Only 8% of Protestants said religion was not too important or not at all important in their lives. Eighteen percent of Catholics said the same thing.

A little more than 1 in 10 “nones” say they pray on a daily basis, the survey found.

Not only has the size of the “nones” group increased, but every subgroup within that population has grown, as well.

A little more than one-fifth of adults pray weekly or monthly, the same as recorded in 2007. Still, the portion of Americans who say they seldom or never pray has risen from 14% in 2007 to nearly one-third (32%) today.

Pew survey: Half of U.S. Catholics pray every day, and the number is dropping