Eighty-three percent of Catholic likely voters are concerned about attacks on churches in recent months, a new poll has found.

Recent months have seen numerous acts of vandalism and destruction at Catholic churches across the United States, including arsons and graffiti.

In July, a man crashed a minivan into a Florida Catholic church and then started a fire inside the building.

In Los Angeles, San Gabriel Mission church, founded by St. Junipero Serra, also burned in a fire being investigated for arson. Numerous statues of the saint have been vandalized or destroyed, most of them in California.

Several other churches across the country have been set aflame, and statues of Jesus or Mary have been toppled or decapitated.

While some attacks on statues have been committed by large groups with clear political affiliations, the perpetrators of other acts have not been identified.

Some commenters see the attacks against churches as part of a worrying rise in anti-Christian views.

More than 3 in 4 Catholics surveyed were concerned about anti-Christian sentiment amid recent social protests.

A little more than half of those surveyed said they were “very concerned” by the anti-Christian sentiment, and an additional quarter said they were “somewhat concerned.” Thirteen percent said they had little or no concern.

Nearly three-quarters of Catholics surveyed also voiced concern about vandalism of Catholic statues and burning of bibles at some recent protests.

More than 80% of Catholics who say they accept all or most of Church teaching said they were concerned about the acts of violence against statues, compared to just over half of those whos say their Catholic faith has little to no influence in their lives.

The survey comes amid ongoing protests against instances of police brutality and racism across the U.S. In some cases, demonstrators have become violent, including by attacking police officers. Law-and-order, police reform, and systemic racism have become major topics of discussion in the upcoming election.

An overwhelming majority – 82% of those surveyed – said they have at least some trust in their local police department to protect the interests of their family.

Older respondents were more likely to trust the police department than young adults, and white participants voiced higher levels of trust than Black and Hispanic participants, although all age ranges and racial groups saw more than 60% saying they trust the police.

Only 1 in 3 Catholics surveyed said they support “defund the police” initiatives, intended to shift funding from police departments to other social services.

Just 29% of white respondents supported “defund the police” initiatives, compared to 48% of Black respondents and 41% of Hispanics.

‘We took the direct hit’: Louisiana diocese in ‘some crisis’ a week after Ida 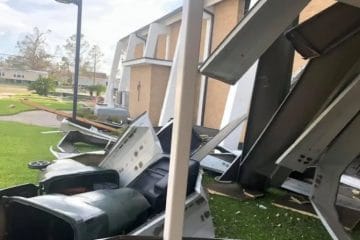