Vatican City, Dec 21, 2019 / 07:54 am (CNA).- Pope Francis Saturday accepted the resignation of Cardinal Angelo Sodano as dean of the College of Cardinals and declared that the position will now have a five-year term limit with the possibility of renewal.

The 92-year-old Sodano was elected dean of the College of Cardinals in 2005. According to Francis’ letter, he will now be referred to as “dean emeritus.”

The dean of the College of Cardinals presides at the conclave for the election of the pope and represents the Holy See during the sede vacante.

If the dean is over the age of 80 and therefore ineligible to take part in a conclave, it is presided over by the most senior cardinal of the rank of cardinal bishop.

The dean is elected by and from among the highest of these ranks, the cardinal bishops. He has the responsibility to communicate the pope’s death to the diplomatic corps accredited to the Holy See and to the heads of nations, and he is the one who asks the pope-elect if he accepts the election, and what name he will take.

If the new pope is not a bishop, the dean has the right to ordain him.

In his motu proprio Dec. 21, Pope Francis said he made the decision to set a five-year, renewable mandate “with regard to the fact that with the increase in the number of cardinals, ever greater commitments come to weigh on the person of the cardinal dean.”

“At the end of his service, [the dean] can assume the title of dean emeritus of the College of Cardinals,” the pope declared.

The pope did not make any changes to how the cardinal dean is elected. According to the Code of Canon Law no. 352, paragraph 2, “when the office of dean is vacant, the cardinals who possess title to a suburbicarian church and they alone are to elect one from their own group who is to act as dean of the college.”

According to Francis, “over the centuries the Roman Pontiffs have adapted the composition of the College of Cardinals, specifically called to provide for the election of the Supreme Pastor of the Church and to assist him in dealing with the most important issues in the daily care of the universal Church, to the needs of their times.”

He also thanked Sodano for his nearly 15 years of service in the role of cardinal dean and expressed his gratitude to the entire College of Cardinals “for their generous service to the Church and to my ministry as Successor of Peter.”

In June 2018, Pope Francis changed the structure of the College of Cardinals, adding four curial officials to the rank of cardinal bishops.

The custom had previously been that the cardinal bishops were six cardinals from the Latin Church given a particular ceremonial title as the “titular bishops” of Rome’s six ancient suburbicarian sees.

In modern times, cardinal bishops do not actually govern the suburban dioceses in the vicinity of Rome, though the custom of corresponding the rank of cardinal bishop to those dioceses had continued.

The pope’s appointments in June 2018 broke with that custom.

Sodano was a member of the Vatican’s diplomatic corps beginning in 1959, including 10 years as apostolic nuncio to Chile. In 1988 he was appointed secretary for relations with states. He was secretary of state from 1991 until his resignation in 2006.

What a decade! A look at the biggest Catholic stories of the 2010s 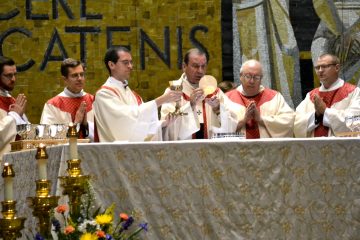