Pope Francis, along with six cardinals and archbishops from North, South, and Central America, worked in collaboration with the Ad Council to produce a public service announcement promoting COVID-19 vaccines.

The announcement is the first Ad Council campaign designed for a global audience, and will be distributed in English, Spanish, and Portuguese.

The PSA is part of the Ad Council’s COVID-19 Vaccine Education Initiative to encourage vaccination against the coronavirus.

“COVID-19 vaccines are safe, effective and save lives,” the Ad Council stated in an Aug. 17 release.

In the PSA, Pope Francis is heard saying, “Getting the vaccines that are authorized by the respective authorities is an act of love. I pray to God that each one of us can make his or her own small gesture of love, no matter how small, love is always grand.”

“To the world’s billion-plus Catholics, the Pope is one of the most trusted messengers and holds unparalleled influence,” said Lisa Sherman, president and CEO of the Ad Council, in the release. “We are extremely grateful to him and the cardinals and archbishops for lending their voices and platforms to help people across the globe feel more confident in the vaccines.”

Recent data shows that 72 percent of the adult American population and 67 percent of Hispanic adults have been vaccinated, according to the release.

“Faith-based leaders and institutions play such a significant role in reminding us of our common humanity,” said John Bridgeland, co-founder and CEO of the COVID Collaborative in the release. “With these powerful words from Pope Francis and the cardinals and archbishops from across the globe, their message will inspire millions to take action to ‘love thy neighbor’ during this pandemic.”

The COVID-19 Collaborative wanted to involve religious leaders in the “It’s Up to You” campaign because of their “influence and trust in their communities,” according to the release. Previous participants in the campaign include former U.S. Presidents Barack Obama, George W. Bush, Bill Clinton, and Jimmy Carter, along with several musicians, religious leaders, and medical experts.

The PSA comes on the heels of conscience rights controversies in the United States, with some U.S. bishops refusing to issue letters of religious exemption for vaccine mandates. The Archdioceses of Los Angeles and New York have instructed their priests to abstain from issuing such letters should a parishioner request one, while the bishops of Colorado and South Dakota have upheld the conscious rights of Catholics who chose not to get the vaccine.

The Ad Council, a U.S. nonprofit organization, states that it is a “nonpartisan, nondenominational organization, engaging a diverse range of communities, including the faith community, to impact society for good,” according to the release. The COVID Collaborative is a bipartisan group, co-chaired by former Governor and U.S. Senator Dirk Kempthorne (R-ID) and former Governor Deval Patrick (D-MA), and led by CEO John Bridgeland and President Gary Edson.

The PSA will stream internationally, with a focus on Spanish-speaking countries. 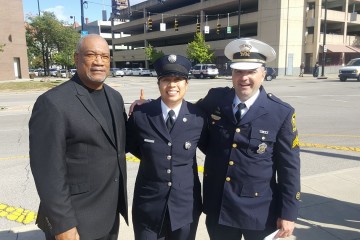