Pope Francis on Lent: Jesus is with us, even when we’re tempted

Pope Francis highlighted Jesus’ 40-day journey in the desert, where he is tempted by the devil, as an example for the faithful during Lent.

“Jesus too was tempted by the devil, and he accompanies us, every one of us, in our temptations,” Pope Francis said on Sunday.

The 85-year-old pontiff reflected on the Gospel of the first Sunday of Lent to the crowd in St. Peter’s Square in Rome ahead of the Angelus, a Marian prayer. The faithful gathered to pray with the pontiff, including many who waved the flag of Ukraine, a country that he expressed solidarity with during Russia’s ongoing invasion.

During his Angelus address, Pope Francis examined Jesus’ interaction with the devil.

“Twice the devil addresses him, saying: ‘If you are the Son of God…,’ he began. “He is thus proposing to him to exploit his position: first to satisfy the material needs he feels, hunger, then to increase his power; and, finally, to have a prodigious sign from God.”

“It is as if he were saying, ‘If you are Son of God, take advantage of it!’” Pope Francis added.

The devil, he said, uses similar tactics with human beings.

“How often this happens to us: ‘But if you are in that position, take advantage of it! Don’t lose the opportunity, the chance,’ that is, ‘think of your benefit,’” he said of the devil’s deception.

This “seductive proposal,” he continued, “leads you to the enslavement of the heart: it makes us obsessed with the desire to have, it reduces everything to the possession of things, power, fame.”

He examined how Jesus “opposes the attractions of evil in a winning way.”

“[T]rue happiness and true freedom are not found in possessing, but in sharing; not in taking advantage of others, but in loving them; not in the obsession of power, but in the joy of service,” he explained.

He emphasized Jesus’ wording with the devil.

“Jesus does not converse with the devil: he never conversed with the devil,” the pontiff stressed. “Either he banished him, when he healed the possessed, or in this case, when he has to respond, he does so with the Word of God, never with his own word.”

The faithful, he said, should do likewise.

“Brothers and sisters, never enter into dialogue with the devil: he is more cunning than we are,” he warned. “Cling to the Word of God like Jesus.”

He told the faithful to “be vigilant” against the devil who can appear “with sweet eyes” and “with an angelic face.”

“How often we heard, ‘I have done strange things, but I have helped the poor’; ‘I have taken advantage of my role — as a politician, a governor, a priest, a bishop — but also for good’; ‘I have given in to my instincts, but in the end, I did no harm to anyone’, these justifications,” he listed. “We must not fall into that slumber of the conscience that makes us say: ‘But after all, it’s not serious, everyone does it!’”

Even with Jesus, he said, the devil wanted him “to believe that his proposals were useful to prove that he was really the Son of God.”

At the same time, Pope Francis reminded listeners, “do not be afraid,” and proposed, “may this time of Lent also be a time of the desert for us.”

“Let us take time for silence and prayer — just a little, it will do us good — in these spaces let us stop and look at what is stirring in our hearts, our inner truth, that which we know cannot be justified,” he explained. “Let us find inner clarity, placing ourselves before the Word of God in prayer, so that a positive fight against the evil that enslaves us, a fight for freedom, may take place within us.”

He also encouraged the faithful to ask the Blessed Virgin Mary “to accompany us in the Lenten desert and to help us on our way of conversion.”

St. Michael the Archangel is the protector of the capital of Ukraine. Here’s why

Pope Francis on Lent: Jesus is with us, even when we’re tempted

An Afghan appeals to Pope Francis: Save a Catholic family stuck in Kabul 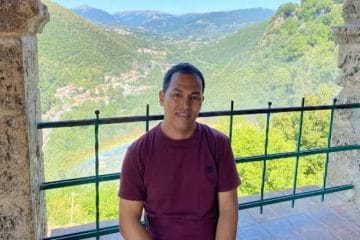