GUANAJUATO CITY, Mexico (CNS) – Pope Benedict XVI greeted Mexicans who lost loved ones in some of the country’s most notorious crimes, events that horrified Mexico and generated international headlines.

They were among people the pope greeted privately March 24 following his public appearance in the city of Guanajuato. No details were provided, although the office of President Felipe Calderon issued a list of the eight attendees and crimes that affected them.

Among the individuals meeting the pope was Maria Guadalupe Davila of Ciudad Juarez, whose son, Rodrigo Cadena, was murdered in a massacre while attending a 2010 birthday party in Villas de Salvarcar.

Veronica Cavazos, widow of Edelmiro Cavazos, the former mayor of Santiago, lost her husband in 2010, when police officers, working in cahoots with the Los Zetas drug cartel, betrayed him. The case was profiled by the CBS news program “60 Minutes.”

Along with the more than 47,500 deaths in Mexico attributed to drug cartel and organized crime violence, thousands more people have disappeared, often in acts known as “levantones,” which, unlike, kidnapping, involve no ransom demands. Reports of crimes such as extortion and kidnap for ransom have increased, too.

The president’s crackdown has proven divisive for some Catholics and church-affiliated human rights groups, who have called for the country’s spiritual leaders to focus on victims and denounce excesses committed by soldiers and police – difficult for some priests as Mexico has a history of tense church-state relations.

Additionally, clergy often prefer to maintain positive ties with local and national politicians, instead of raising thorny issues such as human rights.

The level of “victimization in Mexico is frightening,” said Bishop Raul Vera Lopez of Saltillo, who said he considered the violence sweeping Mexico – much of it committed by criminals who were once baptized as Catholics and still participate in acts of piety and invoke protection and intervention from saints – to be a failing of the church and diocesan ministries.

He called for the Mexican church to commit to the “better training of lay members” and to do so in a constant manner – not just when someone comes to the parish to receive sacraments.

A movement highlighting the cause of victims surged in 2010, led by Catholic poet Javier Sicilia, whose son was murdered a year ago in the central city of Cuernavaca. His movement has been embraced by some leaders such as Bishop Vera and human rights groups, but has drawn little open support from the Mexican bishops’ conference.

Violence in Mexico was among the concerns of those heading to see Pope Benedict at a Mass March 25 in Silao.

“There are now kidnappings and extortion of simple people like us,” said Irma Palomino, whose family makes pottery in Guanajuato state.

Father Maciel's legacy – good and bad – lives on in Mexico

Rite of Election: Our Lady of The Immaculate Conception Dayton 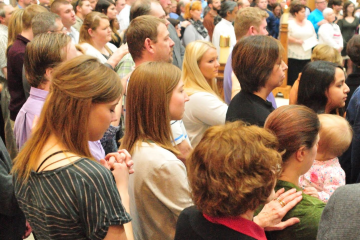