CNA Staff, Oct 20, 2020 / 03:18 pm MT (CNA).- The Archdiocese of Portland in Oregon held a Eucharistic procession through the city on Saturday for the intention of peace in the city.

Praying before the exposed Blessed Sacrament during the Oct. 17 event, Archbishop Alexander Sample said: “Mary, your son is the Prince of Peace. Through your intercession, may he bring peace to our cities and our communities, may his peace reign in our hearts.”

The prayers began with exposition of the Blessed Sacrament at the Cathedral of the Immaculate Conception, followed by a procession to the North Park Blocks, where the archbishop led a rosary and performed an exorcism. Archbishop Sample prayed over the city the “Exorcism Against Satan and the Fallen Angels” from the Roman Ritual.

The procession returned to the cathedral, concluding with Benediction and the Angelus.

Ahead of the event, Archbishop Sample said that “There is no better time than in the wake of civil unrest and the eve of the elections to come together in prayer, especially here in Portland. The Catholic Church takes the promotion of unity, and accordingly peace, as belonging to the innermost nature of the Church. For this reason, the Church fosters solidarity among peoples, and calls peoples and nations to sacrifices of advantages of power and wealth for the sake of solidarity of the human family.”

Portland has seen months of street protests, often taking the form of crowds of hundreds of people protesting, ostensibly, against racism, police brutality, and fascism.

Some of the protests have been accompanied by riots and looting. In addition to extensive property damage in the city’s downtown, there have been occasional incidents of violence within or adjacent to the protests, including shootings and stabbings.

Protesters in Portland have at various times fired commercial-grade fireworks at the federal courthouse, and have thrown rocks, cans, water bottles, and potatoes at federal agents, the AP has reported. Police reported that in July, the protesters attempted to burn down the courthouse.

Protesters in the city have toppled statues of Thomas Jefferson, George Washington, Theodore Roosevelt, Abraham Lincoln, and Harvey W. Scott, an editor of The Oregonian in the late 19th century.

One of the participants, Carolina Ruth Valdez, told The Catholic Sentinel that “what we did contrasts with what has been going on in our city and all this disarray. Jesus is the Prince of Peace. No Jesus, no peace.”

Valdez led the crowd in cheering “Viva Cristo Rey” at the conclusion of the procession.

In July, Archbishop Sample had encouraged Catholics to learn about and study how to respond to the sin of racism, while at the same time condemning the violence accompanying many of the protests in the city for the past two months.

“This all began over the terrible, tragic killing of a man, and initially the outcry against injustice, against racism, was well-placed, and I have been very supportive of the peaceful demonstrations on behalf of justice and against racism,” Archbishop Alexander Sample said in a July 24 video message, referencing the protests sparked by the May 25 killing of George Floyd by Minneapolis police.

“But sadly, that’s not what this is about any more,” he said. 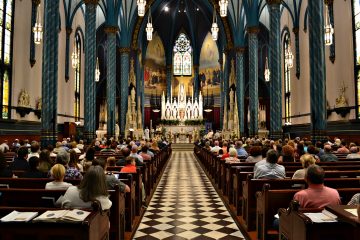