Archbishop J. Augustine Di Noia, OP, vice president of the Pontifical Commission “Ecclesia Dei” who recently held the position of secretary for the Congregation for Divine Worship, will give the annual Le Blond Lecture at 7:30 p.m., Wednesday, September 12 in the Bartlett Pastoral Center on the Athenaeum campus. His topic will be: “What is the New Evangelization?” 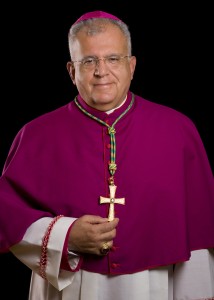 Just two years ago on September 21, 2011, Pope Benedict XVI established a new Pontifical Council for Promoting the New Evangelization, and on October 7, 2012, the Ordinary Session of the Synod of Bishops will convene to take up the topic of “The New Evangelization for the Transmission of the Christian Faith.” But what is the “new evangelization” and why do we need it? Archbishop Di Noia will answer these questions.
The new evangelization is nothing more – and nothing less – than the renewal of the mission that the Church received from Christ Himself to “go and make disciples of all nations” (Mt 28:19) in the new circumstances of social change that have had an impact not only on the surrounding culture but even on many local communities within the Church.

The Holy Father has called on all bishops, priests, religious and faithful to take up this challenge to discover “appropriate responses” to the new situation “so that the entire Church, allowing herself to be regenerated by the power of the Holy Spirit, may present herself to the contemporary world with a missionary impulse to promote the new evangelization.” The lecture is free and open the public.

Archbishop Di Noia is a Dominican theologian who now serves as secretary of the Congregation for Divine Worship and the Discipline of the Sacraments. Previously, he held the post of under-secretary at the Congregation for the Doctrine of the Faith, and before that he was director of the Intercultural Forum for Studies in Faith and Culture at the Pope John Paul II Cultural Center, and executive director of the secretariat for Doctrine and Pastoral Practices of the USCCB.

Archbishop Di Noia is the author of The Diversity of Religions: A Christian Perspective (Catholic University of America Press, 1992) and the co-author of The Love That Never Ends: A Key to the Catechism of the Catholic Church (Our Sunday Visitor Press, 1996). He has written many articles and reviews. He taught systematic theology at the Dominican House of Studies for 20 years and was an adjunct professor at the John Paul II Institute for Marriage and Family Studies. He served as editor-in-chief of The Thomist and has been a frequent presenter at conferences, workshops, symposia, and other educational meetings.
The Athenaeum is honored to have a speaker of Archbishop Di Noia’s stature and gifts hold the Le Blond Lecture, which this year will be a prelude to the upcoming Year of Faith. The day following the Le Blond Lecture, Archbishop Di Noia will hold a day of recollection for seminarians from Mount St. Mary’s Seminary of the West, Bishop Simon Bruté Seminary, Indianapolis and the Pontifical College Josephinum, Columbus and for seminarians from the Diocese of Covington.