ST. ANDREW DEANERY — Students at Royalmont Academy, a private, Catholic school in the Archdiocese of Cincinnati, participated in several activities to show their support for Pope Benedict XVI and to pray for him.

On April 16, the pope’s 86th birthday, the students sang “Happy Birthday,” enjoyed a birthday treat and offered their prayers for the Holy Father. At an all-school Mass that day, the student body, staff and parents in attendance said a special prayer for the pope.

“Our support for the Holy Father is unconditional, and so we pray for him as a school community during Mass and participate in these activities as a witness of this support. It’s our way of standing by him in the midst of the storm,” commented Tony Ferraro, Royalmont Academy’s executive director and principal.

The school also held a special assembly on April 19 to commemorate the fifth anniversary of Benedict XVI’s election as pope. 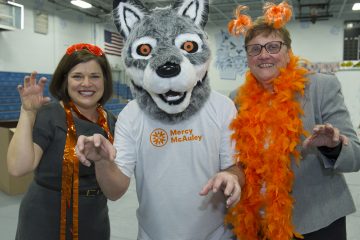