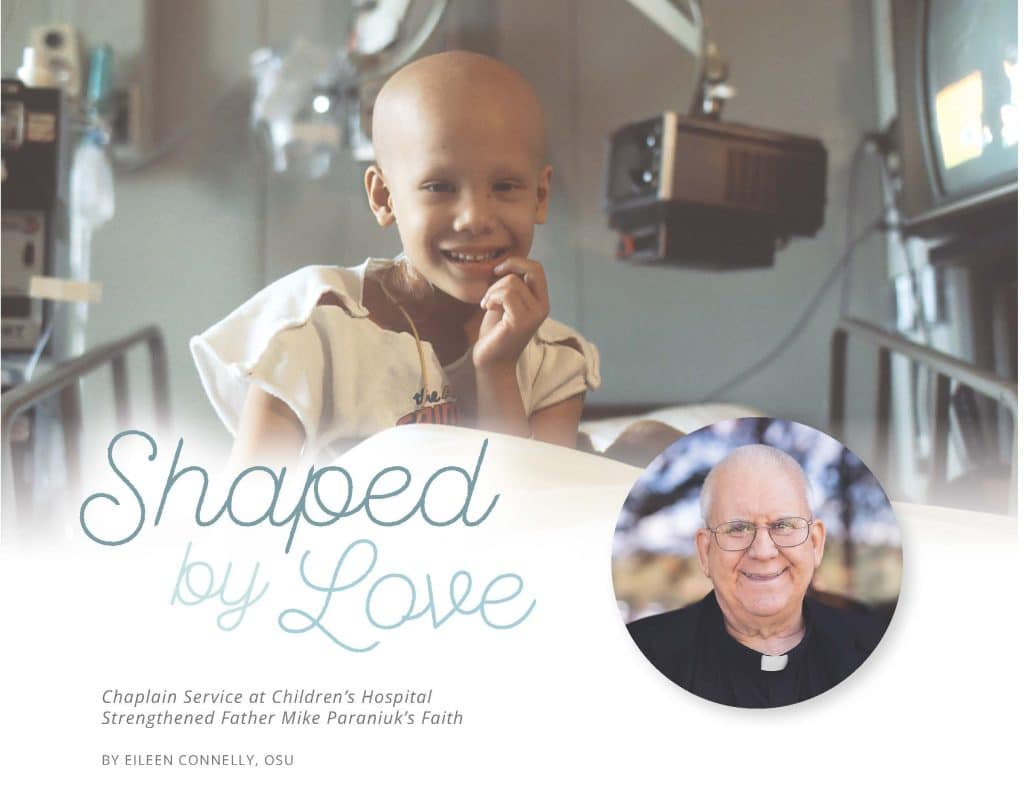 Certain experiences shape our lives, our vocations and our ministries, especially if we are open to God’s presence and recognize that He is with us always. Father Mike Paraniuk finds this especially obvious when he reflects on his long ministry as a chaplain at Cincinnati Children’s Hospital Medical Center.

Ordained a priest for the Archdiocese of Cincinnati in 1981, Father Paraniuk was assigned as parochial vicar to Our Lady of Visitation Parish until 1984. There were then many parochial vicar opportunities available and an opening for a chaplain at Children’s Hospital. “I thought to myself: ‘Pity the priest who has to minister to dying children,’” he admitted. “The very thought of it frightened me. Would I be able to minister to them?’”

Several days later, a fellow priest working at the hospital called him to share that Father Paraniuk’s name surfaced during the priest’s prayers. “I think God may want you to be the new chaplain,” the priest told him.

Despite his misgivings, Father Paraniuk put his name in for the position. He was accepted—and quickly learned that he was the only applicant. “I intended to work there only three years. I ended up staying for 24 more,” he said. “I realized what I needed to do was show the children God’s love and help them realize that God is with them.”

Emmanuel. God is with us. Father Paraniuk still thinks of the children he ministered to, especially as the Christmas season approaches. “I spent 95% of my time praying over children who were dying,” he said. “If there were 80 children on a particular day, I would see them all, whether they had a tonsillectomy or cancer. Many of them wouldn’t make it to the next Christmas, so I tried to give a sense of hope to the children and their parents. They needed to hear God was with them and recognize that Christmas, especially, is such a time of hope. I tried to help them come to the realization that there is a whole other reality after this life and the children were going to be part of that reality in heaven.”

While his ministry was to strengthen others’ faith and help them experience God’s presence in their lives, Father Paraniuk is quick to point to how his own faith was deepened by the patients he served. He recalled meeting John, a 10-year-old boy, early in his ministry. Battling cancer, John enjoyed visits from the priest, and they talked about John’s great love for baseball. During one visit when Father Paraniuk noticed John’s condition appeared worse, the boy said, “Father, please stay close by, don’t leave the floor. I’m going to leave, go to heaven, then come back and tell you what it’s like.”

Shortly afterward, Father Paraniuk heard the code blue announcement and medical staff rushed to John’s bedside with a crash cart. Although he clinically died, staff revived him, and the first person he asked to see was Father Paraniuk. “He told me heaven was beautiful,” the priest said. “He saw relatives who had gone before him. He didn’t know them, but they knew him. He heard beautiful music. He said for the first time in a long time, he felt no pain. He felt totally comforted and at peace. He said, ‘I want that and am going back now, but wanted to tell you what it was like to strengthen your faith.’”

Not long after, John coded again and couldn’t be revived. “My faith was strengthened so much by John,” Father Paraniuk said. “He helped me realize what a blessing my ministry was. I celebrated hundreds of children’s funerals and comforted way too many grieving parents. But the children gave me a great gift. They affirmed my faith that death does not have the last word. They strengthened my faith to persevere in offering God’s hope when all seemed lost.”

Looking back on his time at Children’s Hospital, Father Paraniuk said, “It formed me in faith for the rest of my ministry, for my life, really.” He eventually became pastor of St. Mary Parish in Hillsboro, then St. Benignus, and now Our Lady of the Hills parish family, composed of St. Mary, St. Benignus, Holy Trinity in West Union and St. Mary Queen of Heaven in Peebles.

“It was priestly ministry in its purest form,” Father Paraniuk explained. “The ministry of a priest is to be the instrument of God’s presence among His people, to show them his love and care. So many people need to hear that. They need to hear, ‘Do not be afraid. Just trust.’ My ministry at the hospital was an experience of faith, hope and love on a regular basis. I’ve been able to bring that to being a pastor because I was equipped for it as chaplain.”

And, he added, “When my time comes to transition, I’ll welcome it with open arms. I know I won’t be alone because God is with us. It’s the whole message of Christmas. God is Emmanuel.”

This article appeared in the December 2022 edition of The Catholic Telegraph Magazine. For your complimentary subscription, click here.

December 12 - Our Lady of Guadalupe

Today's Video: As we head into the darkest part of the year, we celebrate St. Lucy

How to bless your home on the Feast of Epiphany 2023

The Christmas Truce of 1914: Here’s what really happened