A Mass of Christian Burial for Sister of Mercy Mary Andrea Simpson was celebrated April 23 at the McAuley Convent Chapel in College Hill. Sister Mary died on April 19 at the age  of 78. She was a member of the Sisters of Mercy for 51 years.

Sister Mary was born Helen Virginia Simpson in New York City. She was raised in the Presbyterian faith and spent her childhood in Jamaica. She earned a certificate from Alpha Commercial College.

She later earned two master’s degrees in business and health administration from Xavier University in Cincinnati. In 1989 Sister Mary served as treasurer of the Sisters of Mercy Regional Community of Cincinnati. She retired to McAuley Convent in 1997.

Back to School: Building a Community of Love A Letter From Our Superintendent 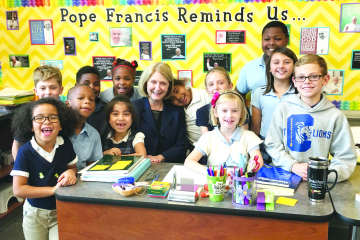