DELHI TOWNSHIP, OHIO – Jan. 3, 2020 – Sister of Charity of Cincinnati Rosalie Riggio died Dec. 25, 2019, at the age of 90 in Penrose Hospital, Pikes Peak Hospice, Colorado Springs, Colorado. Sister Rosalie was born on May 8, 1929 to Joseph and Mary (Glaviano) Riggio in Jansen, Colorado. She was the fourth child of six with two dying at birth. She was a Sister of Charity for 72 years. When making vows she chose the name Joseph Maureen.

Sister Rosalie earned a Bachelor of Science degree in education from the College of Mount St. Joseph in 1960. Graduate work took her to the University of Colorado, St. John’s Cleveland and the University of New Mexico.

Sister Rosalie’s ministries span more than 40 years in education as an elementary teacher, beginning in the primary grades. She first went to Sacred Heart, Denver, Colorado in 1949. In 1954 she came east to St. Michael, Findlay, Ohio; next it was St. Rose, Cincinnati (1957-’58); Holy Cross, Cincinnati (1958-’59); Cathedral, Denver (1959-’60); Holy Trinity, Trinidad (1960-’63); Loyola, Denver (1963-’67); and St. Mary, Albuquerque, New Mexico (1967-’73). At St. Joseph Parish in Pueblo, Colorado (1973-’77) Sister Rosalie developed and administered a family religious education program. In 1977 she went back to the classroom at St. Rose of Lima in Denver for one year. She taught from 1978-’81 at Pauline Memorial, Colorado Springs followed by 10 years at Divine Redeemer, also in Colorado Springs. It was from there that she retired from formal education, but continued living in the area. In 1991 Sister began volunteering in a non-medical caregiving capacity in assisted-living facilities, running errands, driving residents to doctor appointments and visiting the frail elderly in their homes. It became a labor of love. For more than 15 years she has served as the sacristan at St. Joseph Church in Colorado Springs.

A close friend, Susan LeMaster, commented about the consistent presence Sister Rosalie has been at St. Joseph’s, “going back and forth from the sacristy to the altar preparing for Mass, ever faithful. Sister Rosalie was so appreciative of even the smallest things we could do for her. We will miss her presence among us.”

In her retirement years Sister Rosalie appreciated the beauty of nature, walking and reading. It was her stated hope that we as humans would attend to violence and work to alleviate the racism and poverty we find all around us.

Sister Rosalie is survived by her sisters Caroline Kokjohn and Pauline Bonfadini, nieces and nephews. She was preceded in death by her sister Carmela Riggio.

A Memorial Mass was celebrated at St. Joseph Church, 1830 S. Corona Ave., Colorado Springs, Colorado on Friday, Jan. 10. A Memorial in Mother Margaret Hall will take place on Fri., Jan. 24, at 1 p.m., followed by the Visitation in the Heritage Room in the Motherhouse at 2 p.m. Sisters, family and friends will welcome visitors until the time of the Mass of Christian Burial at 3 p.m. in the Motherhouse Chapel. Burial will follow in the Sister of Charity Cemetery. 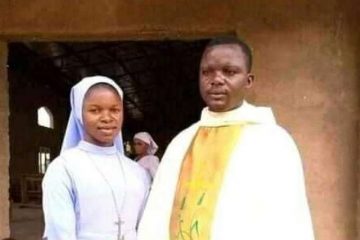