July 5, 2022 The Catholic Telegraph
Home»Features»SOLT Sisters Cheer on the Bengals and Pray for Their Guardian Angels
Features/Home Page

From Cincinnati, OH, to Corpus Christi, TX, Catholics are showing their support for the Cincinnati Bengals in this Sunday’s Big Game. Among the team’s top fans are two Sisters of the Society of Our Lady of the Most Holy Trinity (SOLT). Sisters Mary Mediatrix and Maryam Caritas are both natives of Ohio and have been sharing their team spirit with their community… and Twitter!

Donning their Bengals gear over their religious habits, the Sisters are thrilled to celebrate their team together, and pull other members of their community into the excitement.

“All of my life, I have been a Bengals fan. It is the one thing that unifies my family is that we all root for the Cincinnati Bengals,” said Sister Maryam Caritas.

Sister Mary Mediatrix echoed her sentiments, “Being from Lebanon, my parents are Cincinnati natives. So we just grew up watching the Bengals all throughout my childhood and even listening to them on the radio. So it’s just part of our blood.”

Sister Miriam James, a fellow member of their order, has more than 45,000 followers on Twitter. She began tweeting photos a few years ago of her then-roomate Sister Mary Mediatrix donning Bengals gear on game days – and her posts quickly went viral.

“Sister Miriam and I have known each other for 20 plus years and we used to live together… And she just randomly started tweeting about ‘Sister Mary watching the Bengals and cheering them on.’ And so [those tweets] became popular. So it’s something that we just did off and on over the years,” said Sister Mary Mediatrix.

Over the course of watching the Bengals season this year, Sister Mary Mediatrix realized that the players’ and coaches’ teamwork showcases three main Christian virtues: perseverance, living in the present moment and team spirit.

“We’ve seen these guys come back from 21 to three and they just come back and win it. And so right in our spiritual life, we’ve just got to keep pushing through.” She continued, “When things are down, you just live in the present and then you do your best…. Zach Taylor and everybody are just really living in the present. Like, we’re not here to establish a legacy. We’re just here to win this next game. … We just show up for prayer, we show up for our daily duty, we do our best.

Sister Mary Mediatrix continued,  “I saw this interview with Joe [Burrow] the other day. He can sit down and have lunch with anybody on the team and have a good conversation. … And I see that on the team, the camaraderie, the fraternity and [I see that] in our community. We also have priests and laypeople who we serve together as a team, and that’s just very important.”

After years of being dedicated Bengals fans, the Sisters are offering their prayers for the Bengals this weekend as they finally get to play in the Big Game.

“We’re definitely praying to win, for sure. We’re praying for the safety of all the players that they both play their best. And they win outright as the better team,” said Sister Mary Mediatrix.

Sister Maryam Caritas added, “When I’m watching the game, I typically am praying for the guardian angels of the athletes. So praying that the guardian angels of all the Bengals players will help them win and play well and not get hurt… And that they could continue to grow in their holiness and Christian walk.”

For more on the Sisters of the Society of Our Lady of the Most Holy Trinity (SOLT), please visit solt.net/sisters. 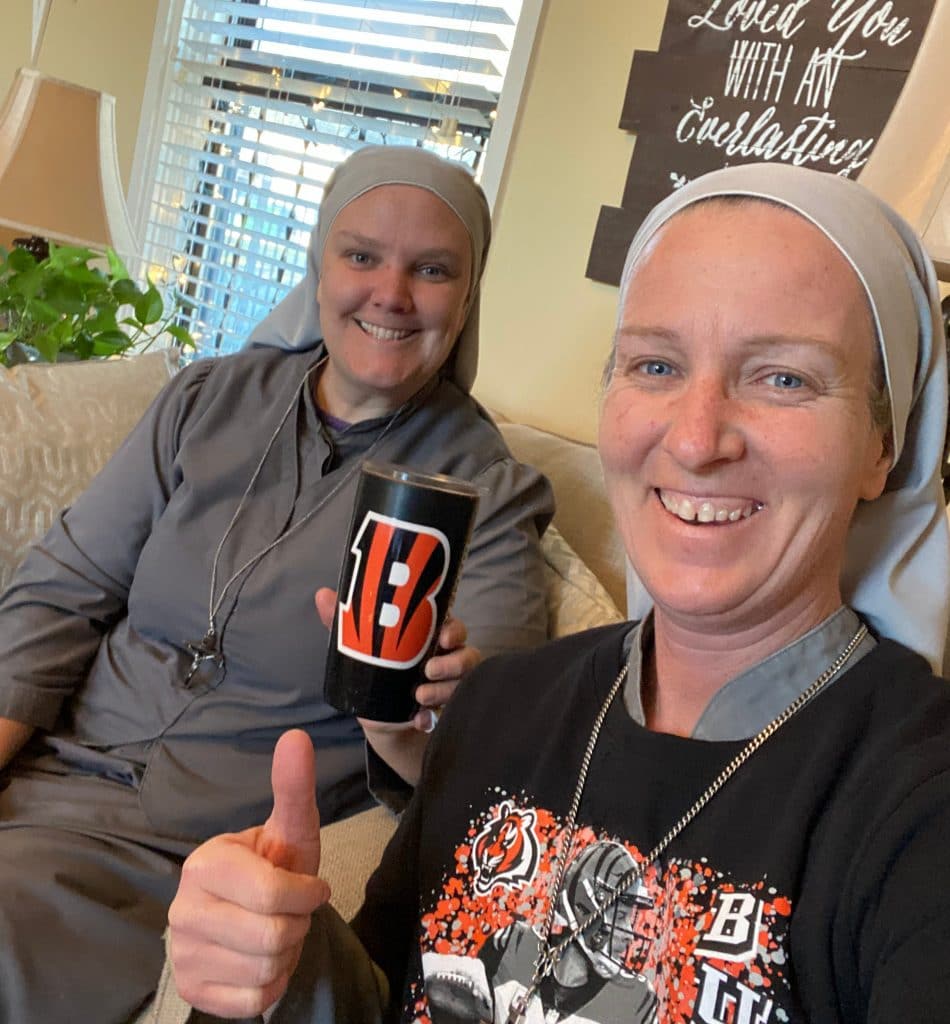 5 fascinating facts about the apparitions of Our Lady of Lourdes