In a separate statement, they also said the looming famine was a man-made catastrophe. They denounced government and rebel troops for attacking the civilian population and at times operating “scorched-earth” policies in defiance of international law.

In a Feb. 23 appeal for humanitarian assistance, the bishops said farmers have fled lands without planting crops as civilians are targeted by both sides in the country’s increasingly bloody three-year civil war. Food shortages have been compounded by problems of unemployment, soaring inflation and poor rains, meaning that the country had now entered a critical time, the bishops said.

Among the most vulnerable are more than 3 million refugees and people internally displaced by fighting between the supporters of President Salva Kiir and former Vice President Riek Machar.

“We anticipate difficult times ahead in 2017 as our people are likely to witness mass starvation by virtue of their multiple displacements, especially (because) the states that traditionally produced cereals in surplus will be missing the planting season, and that will, in turn, lead to further food insecurity in 2017,” the bishops said.

They called for “immediate and unconditional concrete intervention and action … before it is too late.”

In a message sent to churches around the world, the bishops asked Caritas Internationalis and the international community to press for “an immediate stop to the violence and (for) free movement of population.”

They also demanded safe access for aid agencies to reach people in remote areas and secure delivery of humanitarian aid to places where it was needed most urgently.

The bishops also collectively directly addressed the Catholics of the predominantly Christian country in a pastoral letter Feb. 23, telling them that any soldiers who killed, tortured and raped civilians were guilty of war crimes.

“There seems to be a perception that people in certain locations or from certain ethnic groups are with the other side, and thus they are targeted by armed forces,” the bishops said. “They are killed, raped, tortured, burned, beaten, looted, harassed, detained, displaced from their homes and prevented from harvesting their crops.”

“Some towns have become ‘ghost towns,’ empty except for security forces and perhaps members of one faction or tribe,” they added. “Even when they have fled to our churches or to U.N. camps for protection, they are still harassed by security forces. Many have been forced to flee to neighboring countries for protection.”

The bishops said hatred had become so intense that the victims of such violence were being mutilated and burned even after they were killed.

“People have been herded into their houses, which were then set on fire to burn the occupants. Bodies have been dumped in sewage-filled septic tanks. There is a general lack of respect for human life,” the bishops said.

The church, they said, was increasingly being accused of taking sides in the conflict, but they stressed its neutrality.

“We are for all good things — peace, justice, love, forgiveness, reconciliation, dialogue, the rule of law, good governance — and we are against evil — violence, killing, rape, torture, looting, corruption, arbitrary detention, tribalism, discrimination, oppression — regardless of where they are and who is practicing them,” the bishops said.

They concluded their letter by expressing their joy at the prospect of a visit by Pope Francis to South Sudan in 2017, saying he was “deeply concerned” by the suffering in the country.

“It would draw the attention of the world to the situation here,” the bishops said.

On Feb. 22, Pope Francis used his general audience to appeal for food aid to Sudan, warning the international community that starvation might condemn to death “millions of people, including children.”

In a Feb. 23 statement emailed to Catholic News Service, Auxiliary Bishop William Kenney of Birmingham, England, said that “the world must wake up to this man-made humanitarian disaster.”

“The violence must stop and the international community must intervene,” said Bishop Kenney, a former president of Caritas Europa who has visited South Sudan on several occasions. 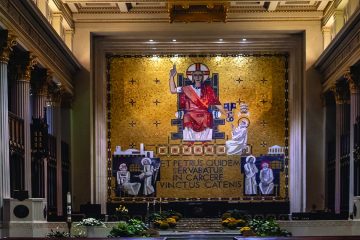