• In late summer 1976, Karol Cardinal Wojtyla visited the U.S. for a Eucharistic Congress and lectured at several universities. He stopped in Cincinnati to meet with Archbishop Joseph Bernardin, who at that time was the president of the National Conference of Catholic Bishops (now the USCCB).

• In their meeting, Wojtyla addressed the relations between the Catholic Church in the U.S. and Poland. He emphasized that the U.S. bishops needed to have more concern and admiration for the Church in Poland, which was still under Communist rule at that time.

• Wojtyla stayed at St. Peter in Chains Cathedral and offered Mass in the archbishop’s chapel next to the sacristy.

• The founder of the Missionaries of Charity first visited Cincinnati on June 19, 1974 to speak at Mount St. Joseph College (now University) on the topic “Waiting for God: When I Was Hungry…When I Was Thirsty.” She received the Mater Et Magistra Award from the college. During that visit, she also spoke at St. Peter in Chains Cathedral and received the Peace Award of the North American Federation of the Third Order of St. Francis.

• 1981 marked the 800th birthday of St. Francis de Sales and, to celebrate the occasion, the Franciscans invited Mother Teresa to join them on June 7, 1981. Auxiliary Bishop Daniel Pilarczyk offered Mass outside St. Anthony Shrine in Colerain. At the end of Mass, Mother Teresa offered remarks to the crowd of 15,000. She remarked, in the West, hurt and loneliness is a much greater disease than leprosy, and that for loneliness there is no cure except the consistent touch of love.

• Mother Teresa’s final visit to the greater Cincinnati area was on June 19, 1982, at Covington Catholic High School. She was en route to Jenkins, KY, where the Missionaries of Charity had recently established a convent. She lamented the poverty in America, especially the evil of abortion. 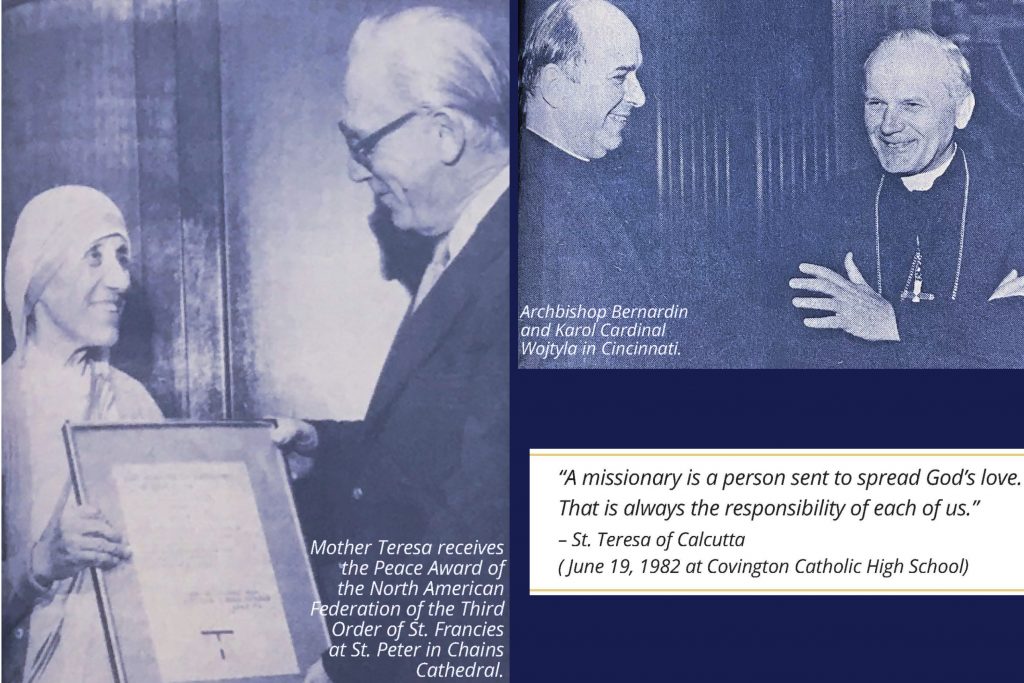 AOC Bicentennial: the society of mary in dayton

15 quotes from St. John Paul II on his love for the Eucharist