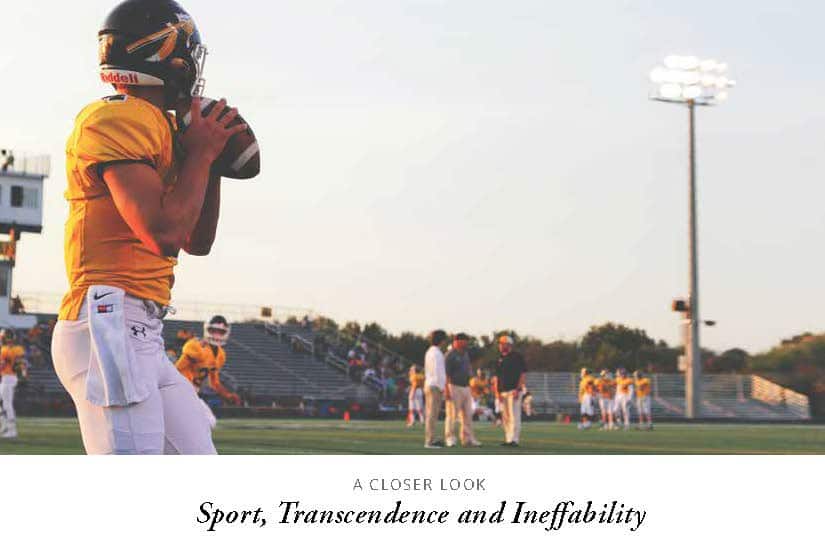 Last January and February, all of southwestern Ohio, northern Kentucky, and southeastern Indiana were caught up in what might be described as a religious experience: the Bengals’ improbable run to the Super Bowl. We came together across economic, racial and ethnic identifications, committed to a single cause and united in our common adoration. Indeed, one might say that devotion to the Bengals transcended all that often divides us, creating a community devoted to a good that is common to all of us.

The word “religion” comes from the Latin word, religare, which means to bind. This evolved into the concept of religio, a sense of duty to some God or gods for the sake of our own well-being, whether it be good health and abundant harvest, or life everlasting. Thus, religious people are bound not by ropes or chains that constrict, but rather by a feeling of obligation to something or someone that makes our lives richer and more abundant. Not to put too fine a point on it, our experience of the Bengals’ first Super Bowl appearance in 33 years contained these elements.

A RELIGIOUS EXPERIENCE
This is not surprising, as sport in general touches the human person in many ways akin to religious experience. In his fascinating book, Baseball as a Road to God, New York University law professor John Sexton accounts for this experience through his own commitment to baseball generally, and the Brooklyn Dodgers of his youth specifically. Sexton doesn’t argue that baseball is the road to God, nor does he claim that baseball (or any other athletics) is a substitute for God. Rather, he argues that elements of sport lend themselves to aspects of human experience and expression that are akin to, and may lead us toward, worship of God.

Sexton begins by discussing what many of us felt last football season, namely the “ineffability” of our athletic enjoyment experience. Though hard to describe, we all felt it. Indeed, we may have thought, you have to experience it to understand it. As Sexton writes, ineffability is invoked “in story or ‘myth’ (not myth as ‘falsehood,’ but myth in the original, sublime sense of the word).” This is myth as a set of stories, legends, rituals and liturgies that bind us to something we believe is true, but ineffable. The thing itself defies full comprehension, much less perfect articulation, but we experience it as true, nonetheless.

Our experience of the ineffable (and of sport as one medium of ineffability) is rooted in the human person’s nature as transcendent. We experience transcendence in varied ways; the most important is our sense of something that is larger than ourselves and toward which our lives are ordered. Thus, we experience God as transcending our ability to articulate or comprehensively understand. But transcendence also has a more “horizontal” aspect. It describes humans’ ability to make abstractions—to translate particular things we see into general things we cannot. As Sexton puts it, “This dimension of human experience touches some of the most important features of our existence.”

And sport is among the most common mediators of this sense of transcendence. We view sport not as mere entertainment (although it is that, and that’s fine), but also as a metaphor for more important aspects of our lives. Participating and watching sports brings us to appreciate (and even to practice) certain virtues that lend themselves to the whole person’s development. Through the virtues of fortitude and temperance, athletes develop their skills and avoid that which impedes them. Even the most gifted athletes must acquire habits and practices that translate athleticism into the skills necessary to excel at their chosen sport. We develop a strong commitment to fundamental justice and fairness, insisting on a level playing field, consistency in rules’ application, unbiased referees or umpires and equal opportunities for both sides to succeed (or fail).

We’re taught that what might be called “profane” or “secular” goods may be incorporated into a good life. We marvel at the perfect cross to the striker’s foot for a one-touch goal; the sublimely arcing, tight spiral that lands in the receiver’s hands; the sound and view of the bat perfectly squared with the ball; the laser-straight drive to the fairway’s middle and the gorgeous approach landing softly on the green. All of these speak to our appreciation of beauty, proportion and excellence, and properly incorporated into a life ordered toward God, they may lead us to a fuller awareness of what we mean by a flourishing life.

Finally, of course, sport reminds us of the contingency of human existence and experience. The road to success is marked by potholes, hurdles, ditches and streams. Sometimes we fail. But even in our failure, we may discover the gifts of resilience and grace. Thus is sport more than simply winners and losers. Rather, it can help us develop the habits and practices that contribute to our sense of those greater things that transcend our ability to name.