ST. MARTN DEANERY — Thanksgiving held special meaning this year for the members of St. Bernadette Parish in Amelia. After worshiping in a small, temporary mission church and in a multi-purpose building for more than six decades, the parish finally has its first permanent church.

It was a day some longtime parishioners thought might never come.

“We had to have something because we’ve grown so much,” said Margaret Heyl, who has been a parishioner since 1952 and raised her seven children at St. Bernadette. “When we first moved here, Amelia was just a few streets.”

At the dedication, Archbishop Pilarczyk noted that the parishioners at St. Bernadette have needed a new church perhaps more than any other parish in the archdiocese.

A parishioner built a small white church in 1944, the year the parish was founded. It was intended to be temporary worship space but continued to serve the parish decade after decade. In the late 1990s a multi-purpose building was built, and the 11 a.m. Sunday Mass was held there. The other two Masses were held in the original church, which seats about 144 people comfortably.

Though the parish raised $1.1 million in cash and pledges for a new facility with worship space, classrooms and offices by 2002, permission to build was denied. Spurred on by Father William Stockelman, pastor, the parish finally raised $1.8 million in cash, enough to build a new church and pay for it with no debt. Parishioners celebrated their achievement at the dedication.

“We pulled ourselves together under Father Bill and raised the funds to build the church. Everybody’s on a high,” said Zenia Kobylski, a parishioner for 30 years. “I feel like we’ve accomplished something. It’s been a long time coming, and it’s something I contributed to.”

Since 2007 the parish has said a special prayer for a new church to St. Bernadette at all Masses. Parishioners have also said the prayer — written by Father Stockelman — in their homes.

“It certainly is an answer to our prayers,” Father Stockelman said. “For a lot of us it strengthened our faith in praying.”

Dual committees spent about three years on the project. One raised money while the other designed the building. A groundbreaking ceremony was held in March. Parishioners lined the perimeter of the building’s footprint.

The new church features a central tower that rises 42 feet above the floor, a bride’s room and a large gathering space. It seats 485, but is designed so that it can be expanded to seat an additional 200. The cherry wood altar and adjustable ambo were crafted by a parishioner, and another parishioner designed the sound system. A St. Bernadette music minister donated the new piano.

The goal was to design a church to reflect the parish’s quasi-rural atmosphere.

“We wanted it functional,” said Mike Grever, chairman of the building committee. “We wanted it modest in terms of fixtures, yet reverent and beautiful.”

The church was full, and people lined the walls and spilled out into the entryway for the moving dedication ceremony. The event started in the original mission church and Archbishop Pilarczyk led the parishioners across a parking lot to the new building. About 750 people attended the dedication.

In his homily, Archbishop Pilarczyk detailed the meaning behind the elements of the dedication liturgy.

“The actions that form part of the dedication liturgy also instruct us about the meaning of church, both as building and as community,” the archbishop said. “When the dedication rites have concluded, we proceed to the liturgy of the Eucharist, the offering of the first Mass in this new church. Like every Eucharist, this one too speaks of church, of the community of the faithful with Christ at its head, sanctifying, reaching out, leading us to eternal happiness.”

After the dedication, parishioners and guests celebrated with a reception. While adults visited and munched on appetizers, children swarmed the playground at the parish school.

Father Stockelman was busy as a stream of parishioners sought him out for a quick word or two.

“I feel privileged and honored to be here when God has so blessed the people of St. Bernadette Parish,” he said. “I’m happy for the people. It opens up a great future for this parish.”

Sunday Scripture: Prepare the way of the Lord

Did you know? St Ann Groesbeck 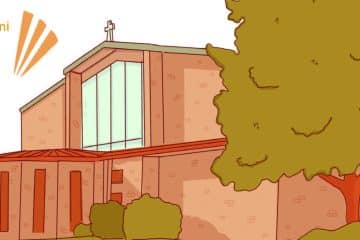