The Catholic Moment: What we already knew

Every year, the Center for the Applied Research and the Apostolate releases the results of a survey of all the men to be ordained to the priesthood for the coming year.  (It can be found online at www.usccb.org/vocations.)  For those who work in the efforts of building a culture of vocations in the Catholic Church, the results both confirm the work we are doing and offer additional challenges to spur us on further.

While the survey contains enough statistical data to thrill “numbers people,” there are a few pertinent details that I would like to extract for further reflection; how they reflect the current situation of vocations in the Archdiocese of Cincinnati.

As has been the case for the last several years, the average age of the men being ordained to the priesthood is 34, while the median age is 31.  This has come down slightly over the last few years and reflects a growing desire on the part of our young people to give back to Christ and to the church.  There is a great passion and zeal on the part of our young people — which I see on an almost daily basis in working with high school, college and post-college men and women — both among those discerning a priestly or religious vocation as well as among those discerning married life and a secular career.

Over the last few years in the Archdiocese of Cincinnati, we have striven to increase our numbers of college seminarians and reached out to current college students. This has resulted in a significant drop in average age from the upper 30s when I was ordained in 2004 to now about 30.

Interestingly, despite the younger age of men both entering seminary and being ordained, nine in 10 being ordained to the priesthood this year report some type of full-time employment prior to entering seminary formation, primarily in education. Again, this reflects on the desire of so many of our young people to “give back” to those who have provided so much.  There is more of a willingness to sacrifice, more of an openness to the bigger picture, than the moving up in the corporate grind that those in my generation, just 10 years older, seemed to embrace.

A final point from the data concludes that “on average, responding ordinands report that they were about 16 when they first considered a vocation to the priesthood.” Among those who were major supporters of their discernment were priests (66 percent), while 71 percent had the support of a friend, parent, grandparent or fellow parishioner.  These influences were much greater factors than any other tool in discernment — websites, videos, radio or television advertising.

This stresses that the work of promoting vocations is too great a responsibility to leave to a two-man office in Cincinnati; it is the responsibility of every Catholic.

What the CARA report stresses, a point which anyone who works with seminarians and those in formation already know well, is that these are regular men, men with many options in the world, yet men willing to give their lives in service to Christ and to the Gospel.  They love the church, they love life, and they wish to pour out themselves in imitation of Christ on the cross.  This report gives great encouragement to continue the work of the Lord in being fishers of men, but it also stresses the need to continue to go out and fish for a larger, richer catch of men who will take up the call to lay down their lives so that others might live.

For more on promoting vocations to the priesthood and religious life among your parish and home, visit www.cincinnativocations.org.

The Catholic Moment: What we already knew 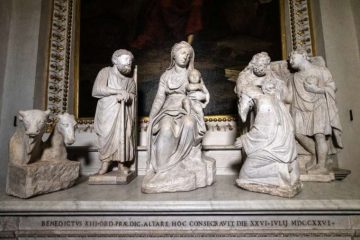