Roughly 300 individuals representing scores of publications and other media gathered in Buffalo, N.Y. from June 24-27 for the 2015 Catholic Media Conference. The final day of the conference included the Catholic Press Association of the United States and Canada awards banquet and The Catholic Telegraph was honored twice. 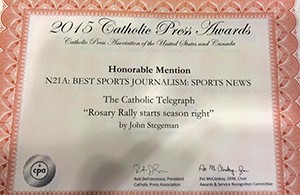 The awards mark the first for The Catholic Telegraph at the CPA banquet since 2011. 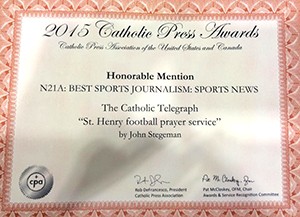 including first place for Best Illustration either with Art Work or Photograph for “St. Peter’s Regret” by Heidi Younger and Best Coverage of the 2014 Synod on Family for “Special Report: Synod on the Family” by editors Jeanne Hunt, Jim and Susan Vogt.

The Catholic Media Conference, according to the event website, “provides opportunities for networking and professional development for journalists, communicators, and service providers.”

For a complete listing of winners at the Catholic Press Association awards, click HERE.

Roundup of reaction to Supreme Court's ruling on same-sex marriage

Church must recognize the gifts of older Catholics, pope says