The grace of marriage, requests & an explanation

Newspaper and media content in general is based a lot on milestones.

In days past, everyone could count on the “free” publication of a birth announcement, engagement and wedding announcements and their obituary.Often, you could get certain life milestones such as anniversaries – 25th, 50th, etc. – published and celebrating your 100th birthday often brought a reporter to your door, although I once heard an editor tell someone that she would not send a reporter out for a 97th birthday due to policy: “Call me back in three years,” she said.

The extraordinary woman who surrendered her last name to me in 1969 helped me mark our 44th wedding anniversary in early September. She does not think of herself as extraordinary but she managed the family of an itinerant newspaperman for 14 major moves to places as exotic as Minot, N.D., Havana, Fla., and one gigantic move from North Carolina to southern California.

The Catechism of my youth said that a sacrament is an outward sign, instituted by Christ, to give grace. Grace is a sharing in the life of God and we certainly must have had the advantage that His grace gives us to survive all of those moves and the crises that attend raising three children including a set of twins.

When we exchanged vows and rings, we had no idea how much things would change in the years ahead. We planned to have children and we rejoice in their accomplishments and families. We also appreciate those quiet times when we glance around and realize we still have each other, if not much else.

We are thankful for being allowed to share in God’s life-giving power as male and female creatures, as He intended. We are thankful for all the good people we’ve met along life’s twisted journey. And we are mostly thankful for that sacramental grace that sustained us through good times and bad.

I know it’s more than 80 shopping days until Christmas, but I have a holiday favor to ask.

I’m sure many of the parishes and families of the archdiocese have Advent and Christmas traditions that they share at this special time of year.

My wife comes from a family with an Austrian-German background so we celebrated Dec. 6, St. Nicholas’ feast day with stockings filled with treats and tiny gifts. My father’s parents came from Croatia, so as a child, I took breakfast to my grandfather-namesake on Dec. 26, the feast of St. Stephen. Before we left Illinois, we attended a midnight Mass that included a La Posada. But it doesn’t have to be something ethnic or cultural. You may have developed your own special tradition and that’s interesting, too.

Does your family or parish preserve similar traditions? If you do, please let me hear about them so I can share them with our readers in the December edition. I’ll take any and all submissions. I would prefer email so I don’t have to do a lot of typing or interpreting handwriting.

Just send the story along to [email protected] Archbishop Dennis M. Schnurr’s charge to The Catholic Telegraph includes sharing the faith with each other and giving Catholics here a sense of the church in the world. Please join me in fulfilling that charge.

I’m also looking for stories about entrepreneurs who operate a Christ-centered business based on Catholic teaching. If you know of such a business person, please let me know. We’d like to share their story with our readers.

Last month, we ran a story about Pope Francis on page 28. One of our readers called, very upset that the Pope was so far back in the paper. If one person calls, there are at least a couple of dozen who felt the same way but did not call.

Let me assure you no disrespect was intended. While we try to lead The Catholic Telegraph with local news, the reason things end up on certain pages often has to do with timing, not intent. Because we publish monthly, breaking news cannot be our mainstay. But if an important story comes out of the Vatican at the eleventh hour, we do our best to get it in. The closer such news comes to the end of our production cycle, the likelier it will be positioned further back in the paper.

No disrespect intended to the pope and I’m sure he would understand.

Trosley is editor-in-chief of The Catholic Telegraph

This column originally appeared in the October 2013 edition of The Catholic Telegraph.

What’s the difference between a sacramental and natural marriage?

The grace of marriage, requests & an explanation 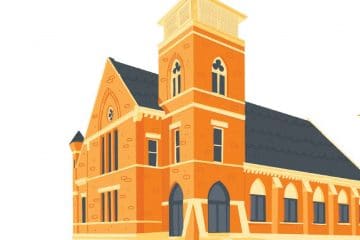