Among Catholics, an emphasis on one true aspect of Communion often leads to the denigration (if not effective denial) of another true aspect of Communion. Some Catholics emphasize the Real Presence of Christ on the altar at the words of consecration, but ignore the Eucharist’s community-forming nature. Others emphasize Communion’s community-forming nature, but downplay (or even deny) the Real Presence of Christ in the Host. A closer look at a less obvious Gospel account of the Eucharist illustrates how both aspects should be embraced and celebrated, and why we should resist this “either/or” error.

Catholics are familiar with the words of consecration in the Liturgy of the Eucharist during Mass: “Take this, all of you, and eat of it: for this is my body which will be given up for you.” These words are taken from the Gospel accounts of Jesus’ institution of the Eucharist on Holy Thursday, the night before his crucifixion, “on the night he was betrayed” (Eucharistic Prayer III). While the center of our Eucharistic liturgical celebration, this prayer is not the New Testament’s only Eucharistic reference. In the Gospel of Luke, another Eucharistic event helps flesh out our understanding of both the Real Presence and the celebration’s community-forming nature.
In Luke 24, after the crucifixion two disciples returned from Jerusalem to their home in the nearby town of Emmaus. Jesus met them along the road and asked what they were discussing, but was not recognized by the disciples. They explained their disappointment of the previous days’ events, when their hoped-for Messiah was executed by the Roman authorities, mass confusion followed and His body disappeared. “We were hoping that he would be the one to redeem Israel,” one of them bemoaned. As they walked together Jesus explained that these events were prophesied in the Hebrew Bible, and it was necessary for them to occur.

They reached Emmaus and Jesus began to move on, but the disciples urged Him to stay at their house. When they sat down to eat, something unexpected happened. Rather than the hosts offering a blessing for the food and feeding their guest, Jesus himself “took bread, said the blessing, broke it, and gave it to” the disciples. In other words, the disciples provided the gift of bread, but it was Jesus who gave thanks and fed His followers with the blessed food. And it was not only (or even primarily) physical nourishment they received from the meal, but spiritual sustenance. “Their eyes were opened and they recognized” Jesus as their Messiah, explains the evangelist. In other words, Jesus’ presence became real to them when He blessed, broke, and fed the bread to them. And at the very moment of recognition, Jesus “vanished from their sight.”

Amazed by what they experienced, the Emmaus disciples immediately set out for Jerusalem to tell Jesus’ other followers what happened. They went to the remaining 11 apostles and “recounted how [Jesus] was made known to them in the breaking of the bread” (emphasis added). Even as the Emmaus disciples were recounting their experience, Jesus “stood in their midst and said to them, ‘Peace be with you.’” Jesus appeared to the community of believers at the very moment the disciples were explaining that He had appeared to them in the breaking of the bread. While we celebrate Pentecost as the “birthday of the Church,” we clearly see her embryonic form in this gathering of believers around Christ in their midst.

The parallels to the events at Mass are not accidental. We bring the bread to the altar in our local parish (our house), where we offer it to our Lord. The priest, in persona Christi, gives thanks, blesses the bread, and feeds us who brought it. In the breaking of the bread, we recognize Jesus, really present and really known. And in His Real Presence on the altar, Christ gathers the community around Himself. Finally, after the consecration and Lord’s Prayer, the priest (again, in persona Christi) says, “Peace be with you,” just as Jesus said to the community of disciples in Jerusalem after the pair returned from Emmaus.

We rightly associate the Liturgy of the Eucharist with the Last Supper on Holy Thursday. But the Emmaus story deepens and enriches our understanding of the Eucharist, illustrating both the Real Presence of Christ and the communal nature of the liturgy. We must not succumb to an “either/or” mentality. The Church teaches that the Eucharist is both the real presence of Christ on the altar and the formation of the community we call the Church. A journey to Emmaus and back reminds us of both these important truths. 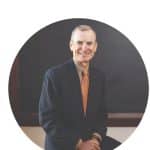 This article appeared in the February 2023 edition of The Catholic Telegraph Magazine. For your complimentary subscription, click here.