The Tragedy of Sin Part 1

This article is part of an ongoing series on Pope St. John Paul II’s Theology of the Body (TOB).

In last month’s reflection, we explored the state of our first parents at the beginning of time, which was marked by the Four Harmonies—between man and God; within man himself; between one another; and with the rest of creation.

When we reflect on our own experiences, we quickly discover that, for each of us, these relationships are not marked by persistent harmony, but significant disharmony. This difference is the clearest indication that we exist in a different state than our first parents. The primordial event that separates them from us and radically changed the state of our humanity is what we refer to as original sin.

We are all familiar with the story in Genesis 3 in which the serpent tempted the woman to eat of the tree of the knowledge of good and evil, how she succumbed and induced the man to do likewise, and how their situation before God and before each other was altered for the worst. We know that prior to this tragedy the man and woman did not experience the inclination to sin that we now experience. They experienced the Four Harmonies and were filled with God’s grace. How is it that they could fall into sin? What was the nature of their sin?

In our experience, temptations to sin come from a variety of sources, which Scripture and Tradition have summarized as the flesh, the world and the devil. That is, temptations to sin come to us from within our fallen human nature, from the negative influence of others and from demonic influences. However, our first parents, being filled with grace and possessing a fully integrated human nature, could only experience temptations from external sources. Scripture identifies the source of their temptation as the “serpent” (Gen. 3:1) who is later revealed to be “the great dragon … that ancient serpent, who is called the Devil and Satan, the deceiver of the whole world” (Rev. 12:9) and whom Jesus refers to as “the father of lies” (Jn. 8:44). Satan and his demons, who were created good and “endowed with knowledge and freedom had been ‘put to the test’ so they could make their choice commensurate with their purely spiritual nature” (Sept. 10, 1986). At the outset of creation, Satan and his demons “radically and irrevocably rejected God and his reign” (CCC 392), preferring themselves to God out of pride. In their consequent exile from heaven, they seek to subvert God’s reign wherever they can, and so tempted our first parents into sin.

The tempter succeeded in his effort to provoke humanity’s fall from grace by inducing doubt of God’s goodness. In Genesis 3:4-5, Satan distorts the words of the Creator and sows seeds of suspicion and rebellion in our first parents. Specifically, he plants the idea that God’s law, rather than being an expression of His wisdom and love, is merely an arbitrary imposition to ensure our subordination. If we rebel, as the lie goes, we can become “like God,” no longer dependent on our Creator. Rather, we can become gods ourselves. It is as if Satan is saying to our first parents— and to all of us—that God is holding you back and you will never be fulfilled unless you take what you want and ignore His presumptively false warnings and apparently arbitrary rules. Under Satan’s influence, God no longer looks like a loving Father and the bestower of gifts more numerous and immense than we could ever deserve. Rather, He looks—in this demonic distortion—as an evil tyrant who is uninterested in our fulfillment, seeking only to control us while keeping His greatest blessings for Himself.

The tempter succeeded in undermining our first parents’ trust in their loving Father. Through their disobedience, they rejected God’s love as well as their status as creatures, seeking rather to supplant the Creator. As Pope St. John Paul II said, they gave in to “love of self to the point of contempt of God” and in so doing, “became the slave and accomplice of the rebellious spirits” (Sept. 10, 1986).

In subsequent reflections, we will continue to explore the tragedy of sin, especially its impact on the relationship between the sexes, as well as God’s unrelenting pursuit of our redemption.

Dr. Andrew Sodergren, MTS, PSY.D, is a Catholic psychologist and director of psychological services for Ruah Woods. He speaks on the integration of psychology and the Catholic faith. He and his wife, Ellie, have five children.

Saints of the Eucharist: Saint Stanislaus

The Tragedy of Sin Part 1 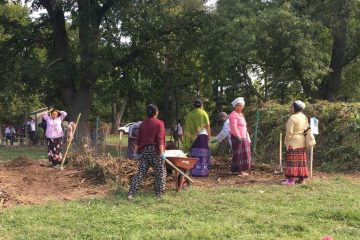