January 25, 2022
Home»Features»Mind & Soul: What is “Theology of the Body”?
Features/Home Page 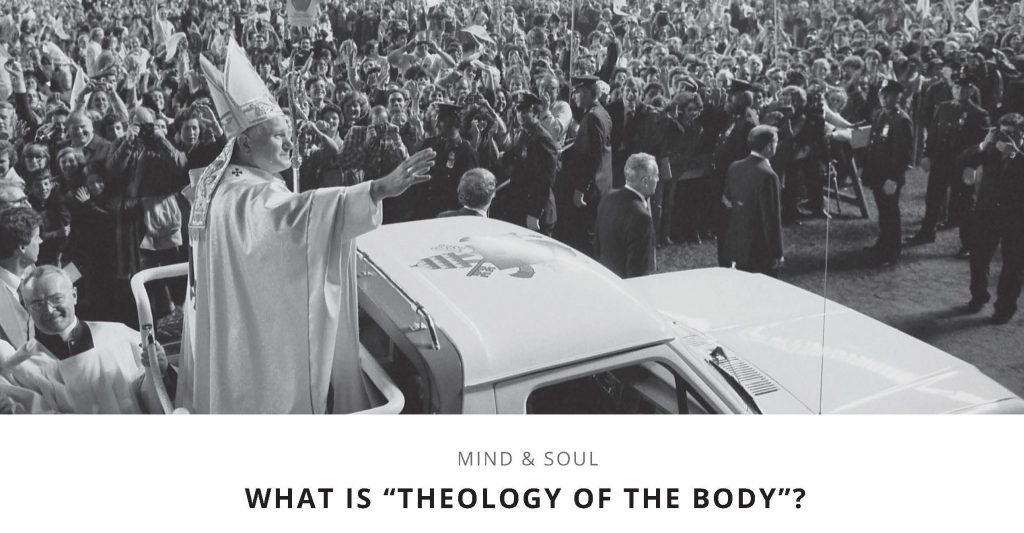 This article is the start of an extended series in which I will reflect on, explain, and apply Pope St. John Paul II’s “Theology of the Body” to contemporary issues.

Have you heard of “Theology of the Body?” This term has gotten quite a bit of attention in Catholic circles in recent years, but many do not understand what it is or why it is relevant to them.

It is impossible to understand TOB without first reflecting on its originator, Pope St. John Paul II. Born in Poland in 1920 as Karol Wojtyła, he lived through the horrors of Nazi oppression, World War II, and the communist takeover of his beloved nation. He was no stranger to tragedy, as he lost his mother and older brother in childhood, and his father at age 20. Wojtyła increasingly turned to God, the Blessed Mother and his Catholic faith. As a priest and, later, bishop, he spent years ministering to the needs of the Polish people, listening to their fears and struggles, striving to understand their experiences and stirring up the hope that comes from faith in Christ.

In addition to being a pastor, Wojtyła was a renowned scholar. In his various works as poet, playwright, philosopher and theologian, he pondered the nature of the human person, Carmelite spirituality, and the nature of love, marriage and morality. The context of his pursuits was the immense violence and social upheavals of the 20th Century, as well as the shifting of moral attitudes in light of the so-called sexual revolution.

As a newly ordained auxiliary bishop, and, later, Archbishop of Kraków, Wojtyła participated in all four sessions of the Second Vatican Council (1962-1965). His stature and reputation as an outspoken, courageous young bishop of immense intellect grew to the point where he was appointed to the committee that drafted, perhaps, the Council’s defining document, the Pastoral Constitution on the Church in the Modern World (Gaudium et spes). Inspired by this experience, Archbishop Wojtyła later became the only participating bishop to write an entire book summarizing the teaching of the Council and giving guidelines for its implementation (Sources of Renewal). Not long after, Pope Paul VI named him a Cardinal.

THE NATURE OF THE HUMAN PERSON

In the 1970s, Cardinal Wojtyła began writing his magnum opus before the Blessed Sacrament in his private chapel in Kraków. Reflecting on all he had learned and experienced, he penned a manuscript on the nature of the human person love, marriage and sexuality. Before he published his book, something happened that changed the course of history. He was elected as the 264th successor to St. Peter and became the first non-Italian pope in 455 years, taking the name John Paul II.

John Paul II saw his election as a sign that the Holy Spirit was calling him to present his teaching not only to the Polish people, but to the entire Universal Church. He decided not to publish his freshly completed manuscript, but bring it with him to Rome and use it as the basis for a long series of speeches delivered to the Church and the world at his weekly general audiences between 1979 and 1984. Throughout, Pope John Paul II used the phrase “Theology of the Body” as a working title for his reflections. Today, those speeches have been re-assembled, re-translated, and presented anew under the title Man and Woman He Created Them: A Theology of the Body (trans. M. Waldstein, Pauline Books & Media).

WHAT DOES THE BODY HAVE TO DO WITH THIS?

At first glance, the term “Theology of the Body” may seem strange. Theology is about divinity and spirituality. What does the “body” have to do with this? Essentially, Pope St. John Paul II sets out to reflect on our common humanity, which is inherently bodily, and understand it in light of Divine Revelation (i.e., scripture and theology), philosophy and ordinary human experience. He is especially interested in how our body reveals our identity, our vocation and how it participates in Divine Love. In reflecting on the human body, one cannot help but encounter the reality of sex (i.e., that we are created male and female). Pope St. John Paul II does not shy away from this topic, but plunges headlong into it to illuminate our understanding of sexual identity, sexual difference, marriage and family.

It is important to point out TOB is not a break from Catholic tradition. Rather, it is a creative re-presenting of perennial truths about the human person in a way that appeals to the experiences and issues we face at the start of the Third Millennium. It helps us understand who we are, what we are made for, and how we are to live. It gives us a framework for addressing some of the most difficult moral and pastoral issues facing us today and points out a path to find our deepest fulfillment.

Dr. Andrew Sodergren, M.T.S., PSY.D is a Catholic psychologist and director of psychological services for Ruah Woods. He speaks on topics related to the integration of psychology and the Catholic faith. He and his wife, Ellie, have been married 21 years and have five children.