Spanish nuns evacuated from Ukraine: Christ was with us in the Blessed Sacrament

Before war broke out in Ukraine, Sisters María, María Jesús, and Antonia of the Missionaries of the Congregation of Saint Dominic were running an after-school program in Kyiv. The three were evacuated last week, and they told the Pontifical Mission Societies the story of their last hours before leaving Ukraine.

Sister Antonia Estrada, 85, founded 25 years ago the “Dim Ditey” or “children’s home,” a nursery and ecumenical center for children where they offer after school activities. Thousands of Ukrainian children of diverse creeds were cared for at the center over the years, until Russia launched its invasion Feb. 24.

“At 5:30, Nastia, my co-worker, calls me, telling me that they’re bombing next to her house,” said Sister María Mayo, 72, who had been serving in Ukraine for 10 years.

The nun explained that shortly afterward her sisters from the community told her that the consul had just called, “warning that the situation has completely changed, that we can’t stay, that like it or not we have to leave.”

“And shortly afterwards, the ambassador (of Spain in Ukraine) called saying that the situation was urgent. That in half an hour we had to be at the embassy,” she related.

Sister Antonia then went to hastily pack up the chapel: “There I found that we had many consecrated Hosts. And I say to myself ‘My God! What should I do? We can’t consume all this. What shall I do with you? Well, you’re coming, let’s go and I’ll take you with us.”

So she decided to wrap the sacred Hosts very carefully and take them with them: “Jesus accompanied us sacramentally all the way.”

The sisters called their flight an “exodus.”

They arrived at the Spanish embassy in Kyiv, where there was a lot of confusion, because although there were 137 registered Spaniards, later 309 showed up. “The embassy has made every effort to take the registered and non-registered,” the nun said, adding that “their work was impeccable.”

“The embassy had been telling us for a long time that we had to leave, but we always resisted because we have never left the mission anywhere,” Sister Maria said, since the three nuns serving in Kyiv had been together in the Democratic Republic of the Congo, where they provided shelter at the mission for foreigners in the area and coordinated an evacuation with the Grupo Especial de Operaciones, Spain’s police tactical unit, while deciding to stay.

The sisters said they would return “right now” to Ukraine, but that they want to be where they are “most useful” and can “help out best.” “They took us out because we’re old, and we don’t want to be a hindrance (in a country at war),” she said.

During their evacuation “we left (the mission) and the sirens sounded to go to the shelters. We went looking for roads, secondary roads, even dirt roads. Many times we had to move aside on the shoulders so that ambulances with the wounded, trucks with soldiers, with war materiel, could pass…”

Along the way they also found a lot of solidarity. In the parks, the townspeople had put large pots of water on the fire so whoever passed by could drink something hot and also have something to eat.

“There are gestures of goodwill from ordinary people that we are all together, and there you saw that we are children of God on the way, without knowing about wars, seeking peace,” Sister Maria said.

It pained the nun to see as they were leaving for Poland that “women with their children in their arms, our children from Kyiv, were left behind. And we were saying the Anima Christi because God came with us. And God is with us.”

“My heart broke to see that I could leave and see all the people who were there waiting,” Antonia related.

Spanish nuns evacuated from Ukraine: Christ was with us in the Blessed Sacrament 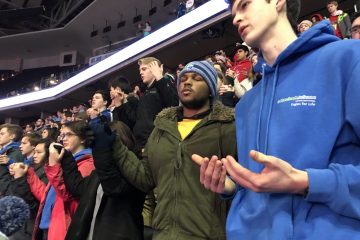