Upcoming election in Sudan has repercussions for local Catholics

ARCHDIOCESE — Citizens of southern Sudan —and Sudanese residents of the Archdiocese of Cincinnati — are eagerly awaiting the opportunity to vote in a Jan. 9 referendum on whether the war-torn region will split from the country’s north.

“People are very excited,” said Mayik Koriom,who hails from the city of Wau in southern Sudan and was resettled locally in 2003. “It will be the first time since 1956 that we will have the chance to decide things for ourselves. We lost our right to worship and to be treated equally. Everything was decided in Khartoum (the capitol of Sudan), and we had nothing. I’ll be voting for secession so I no longer have to be a second class citizen in my own country.”

The vote on independence was mandated by the 2005 Comprehensive Peace Agreement that ended decades of war between northern and southern Sudan. Yet implementing the peace deal has not been easy, and many observers criticize the government in Khartoum for dragging its feet on key provisions, while at the same time allegedly working to destabilize the south in the run-up to the vote.

The buildup of troops of both sides of Sudan’s north-south border, is “not conducive to peace,” said Sudan’s Catholic bishops recently. They called for the development of mechanisms to guarantee that the will of the people will be upheld no matter what the results of the January ballot measures on the future make up of the country.

In a statement issued Nov. 14, the bishops also called for peaceful calm after the results of the vote are announced and appealed especially to young people “to refrain from being drawn into the political violence and heed the call for peace and restraint in order to build the future they desire.”

The dividing lines of the conflict between Sudan’s Arab north and African south were drawn during Britain’s 1899-1956 colonial rule over the area. Arab culture and language and Islam were promoted in the north, while a policy of tribalization and Christianization was introduced in the south. If it secedes, southern Sudan, rich in oil deposits, would need to cooperate with northern Sudan to transport its oil.

The bishops said the conclusion of the peace agreement “should not lead back to the violence it was designed to resolve.”

Koriom, whose family moved north to Khartoum when he was 10, witnessed such violence and persecution firsthand. Prior to beginning university studies in civil engineering in the early 1990s, the young man was forced to attend military training, as is still the standard practice for both Christian and Muslims in Sudan.

When Pope John Paul II visited Khartoum in 1993, Koriom and a number of his fellow Catholic students hoped to meet the pontiff, but were denied permission. Deciding to attend anyway, they left camp and were arrested and briefly imprisoned. Koriom was later involved in organizing the South Sudani Student Union to demand equal rights for students from the south.

“Our school fees were higher, and we were forced to study Arabic,” he explained, “If we didn’t pass it, we couldn’t advance in our studies.

Their efforts were unwelcome by government leaders in the north and many of Koriom’s acquaintances and friends faced persecution, were forced flee, were arrested or disappeared completely. By the time he finished his studies, his own activities led to a warrant for Koriom’s arrest, and he was forced to leave the country for India, aided by southern sympathizers in the security forces. He returned home in 2008 to visit family members who remain there. Koriom is now studying for a doctorate in civil engineering at the University of Cincinnati.

Tony Stieritz, director of the archdiocesan Catholic Action Office noted that freedom and peace in far-off Sudan are important to local Catholics.

“As Catholics, we are called to uphold the lives and dignity of every person, even those on the other side of the globe from us,” he said.  “This is especially urgent since the conflicts in Sudan have cost millions of lives, and a peaceful continuance of the Comprehensive Peace Agreement is essential for ensuring that such bloodshed does not erupt again. The U.S. and Sudanese Catholic bishops have worked closely together in calling on the global community to make certain that the peace continues, and Catholic Relief Services has worked in Sudan for the last 38 years, providing emergency relief and ongoing development assistance.”

“What brings the issue closer to home,” he added, “is that a significant number of Sudanese refugees, many of them Catholic, have been resettled in our own archdiocese. They live and worship beside us, so we feel an even greater zeal to stand in solidarity with them.”

The Sudanese communities in Ohio must travel to Washington D.C. to vote in the upcoming referendum, explained Stieritz, so the Catholic Social Action Office, Comboni Missionaries, Greater Cincinnati Advocates for Darfur, St. Leonard Faith Community and several other religious and community groups have contributed towards the effort.

In addition, said Stieritz, the groups are advocating with federal officials, urging the Obama administration and Congress to ensure that responsible actors in Sudan comply with the provisions of the peace agreement and the south Sudanese decision on self-determination. To that end, Catholic Social Action and Mission Office staff, along with members of other faith communities, have met with senators’ staffs to inform them of the importance of this issue, and met with Congressman-elect Steve Chabot on Dec. 21.

Members of the Sudanese community in the archdiocese have been invited by the Mission Office to be part of the World Peace Day Mass Jan. 1 at 11 a.m. at the Cathedral of St. Peter in Chains, and at the monthly Mass on Jan. 5 at 7 p.m., at the Comboni Mission Center, to pray for the people of Sudan and for a successful outcome to the referendum and the safety of all involved no matter what the results.

“It’s a way of bringing everyone around the table of the Lord and putting the issue in the light of God so that He may enlighten everyone to accept the referendum,” said Comboni Father Ruffino Ezama, a native of Uganda who planned the liturgy.

Another Mass is scheduled for Feb. 2, 7 p.m., also at the Comboni Mission Center, along with the opportunity to discuss repercussions of the referendum results, role of the international community and social action steps.

The Combonis have a long history of service in Sudan, beginning with their founder, St. Daniel Comboni, whose first mission was in south Sudan. In early January Comboni Father Peter Ciuciulla will travel to neighboring Chad to serve as provincial and work with Sudanese refugees.

“The hearts of the Combonis are in Sudan,”said Mary Bertolini, communications director.

Koriom, who was educated by the Combonis said, “I appreciate all they did for me. All the discipline I learned in life came from them.”

Oliver Mogga, a native of Sudan and visiting professor at Miami University, shares Koriom’s excitement regarding what the passage of the referendum means for the people of the country’s southern region.

“We’ve been waiting for this a long time and, over the years, have been praying the referendum goes through. It means freedom. No one will tell the people that they have to become Muslim. No one will exploit them economically. The people feel just like Americans do; they want the land of the free. That’s the kind of society the southern Sudanese want,”said Magga, who faced persecution in southern Sudan due to his resistance to sharia (the law of Islam), while still in high school. He left Sudan for Kenya in 1992 and came to the United States five years later via a scholarship to study international development in the graduate program at Cornell University.

Both men acknowledge that there will be challenges if the referendum passes. “In spite of the anticipation of a new independent state, we have our own internal problems,” Koriom said. “What’s next will be very scary without help from the international community. We will need help providing security from any threats from the north and we’ll have to establish a strong, democratic state. We will have to accept help for that to happen.”

“Passing the referendum is what I see as the easy part,” added Mogga. “But governing is not going to be easy. The leaders of southern Sudan have to realize they have tremendous responsibility and, if they don’t do a good job, they will be judged. In my opinion, the people in the government should be individuals who really want to serve, not just because they see the government as a source of money and power.”

The men also expressed their concern should the referendum fail. “If that happens, it’s very likely the country will return to hostilities,” Koriom said. “The next scenario will be war. Our people will never stay quiet again. They’ll feel that they’ve been robbed of a chance.”

What can local Catholics do to show their support for the people of southern Sudan as the referendum date approaches? “At the moment, contact our congresspersons and the White House,” Stieritz said. “The administration has been strongly engaged, and both houses of Congress have passed resolutions articulating their interest in making Sudan a priority. Local Catholics can thank our federally elected officials for their leadership thus far and remind them that we should keep the maintenance of peace in Sudan a priority. Catholics of the archdiocese can ask for the offices of their senators and Representative by contacting the Capitol switchboard at 202-224-3121. We can contact the White House by calling 202-456-1111 or emailing them at www.whitehouse.gov.”

More information can be found at www.sudanactionnow.org and peaceinsudan.org, a website created by CRS.

CNS also contributed to this story.

Sister Eileen Connelly, OSU can be reached at: [email protected]

Upcoming election in Sudan has repercussions for local Catholics

‘Mary on the Mantel’? Think ‘Elf on the Shelf’, but Catholic 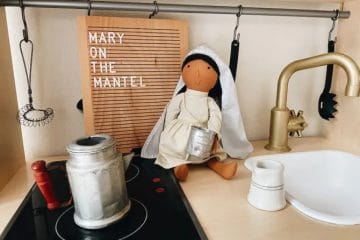