The pope made a special appeal to leaders to grant the poor access to vaccines against the virus which has claimed more than 1.7 million lives worldwide as of Dec. 25.

He said: “Today, in this time of darkness and uncertainty regarding the pandemic, various lights of hope appear, such as the discovery of vaccines. But for these lights to illuminate and bring hope to all, they need to be available to all. We cannot allow the various forms of nationalism closed in on themselves to prevent us from living as the truly human family that we are.”

“Nor can we allow the virus of radical individualism to get the better of us and make us indifferent to the suffering of other brothers and sisters. I cannot place myself ahead of others, letting the law of the marketplace and patents take precedence over the law of love and the health of humanity.”

The pandemic forced the pope to break with the custom of appearing on the central balcony overlooking St. Peter’s Square to deliver his blessing “To the City and the World.” To avoid a large gathering of people, he spoke instead in the Benediction Hall of the Apostolic Palace. Around 50 people were present, wearing masks and seated on red chairs running down the sides of the hall.

In his message, delivered at noon local time and livestreamed on the internet, the pope invoked his latest encyclical, “Fratelli tutti,” which called for greater fraternity between people around the world.

He said that the birth of Jesus enabled us to “call one another brothers and sisters” and prayed that the Christ Child would inspire acts of generosity amid the coronavirus pandemic.

“May the Child of Bethlehem help us, then, to be generous, supportive and helpful, especially towards those who are vulnerable, the sick, those unemployed or experiencing hardship due to the economic effects of the pandemic, and women who have suffered domestic violence during these months of lockdown,” he said.

Standing at a transparent lectern beneath a tapestry of the nativity, he continued: “In the face of a challenge that knows no borders, we cannot erect walls. All of us are in the same boat. Every other person is my brother or my sister. In everyone, I see reflected the face of God, and in those who suffer, I see the Lord pleading for my help. I see him in the sick, the poor, the unemployed, the marginalized, the migrant and the refugee: brothers and sisters all!”

The pope then focused on the war-stricken countries of Syria, Iraq, and Yemen, as well as other hotspots around the world.

“On this day, when the word of God became a child, let us turn our gaze to the many, all too many, children worldwide, especially in Syria, Iraq and Yemen, who still pay the high price of war,” he said in the echoing hall.

“May their faces touch the consciences of all men and women of good will, so that the causes of conflicts can be addressed and courageous efforts can be made to build a future of peace.”

The pope, who plans to visit Iraq in March, prayed for a reduction in tensions throughout the Middle East and Eastern Mediterranean.

“May the Infant Jesus heal the wounds of the beloved Syrian people, who for a decade have been devastated by war and its consequences, now aggravated by the pandemic,” he said.

“May he bring comfort to the Iraqi people and to all those involved in the work of reconciliation, and particularly to the Yazidis, sorely tried by these last years of war.”

“May he bring peace to Libya and enable the new phase of the negotiations in course to end all forms of hostility in the country.”

The pope also appealed for “direct dialogue” between Israelis and Palestinians.

He then addressed the people of Lebanon, to whom he wrote a letter of encouragement on Christmas Eve.

“May the star that shone brightly on Christmas night offer guidance and encouragement to the Lebanese people, so that, with the support of the international community, they may not lose hope amid the difficulties they currently face,” he said.

“May the Prince of Peace help the country’s leaders to lay aside partial interests and commit themselves with seriousness, honesty and transparency to enabling Lebanon to undertake a process of reform and to persevere in its vocation of freedom and peaceful coexistence.”

Pope Francis also prayed that ceasefires would hold in Nagorno-Karabakh and eastern Ukraine.

He then turned to Africa, praying for the peoples of Burkina Faso, Mali and Niger, who he said were suffering from “a grave humanitarian crisis caused by extremism and armed conflicts, but also by the pandemic and other natural disasters.”

He appealed for an end to violence in Ethiopia, where conflict broke out in November in the northern Tigray Region.

He asked God to comfort inhabitants of the Cabo Delgado region in northern Mozambique, who have faced an onslaught of terrorist attacks.

He prayed that the leaders of South Sudan, Nigeria, and Cameroon would “pursue the path of fraternity and dialogue they have undertaken.”

Pope Francis, who celebrated his 84th birthday last week, was obliged to adapt his Christmas schedule this year because of rising coronavirus cases in Italy.

Fewer than 100 people were present in St. Peter’s Basilica on Thursday night when he celebrated Midnight Mass. The liturgy began at 7:30 p.m. local time due to a 10 p.m. curfew throughout Italy to curb the spread of the virus.

In his “Urbi et Orbi” address, the pope highlighted the suffering caused by the virus in the Americas.

“May the Eternal Word of the Father be a source of hope for the American continent, particularly affected by the coronavirus, which has intensified its many sufferings, frequently aggravated by the effects of corruption and drug trafficking,” he said.

“May he help to ease the recent social tensions in Chile and end the sufferings of the people of Venezuela.”

The pope acknowledged the victims of natural disasters in the Philippines and Vietnam.

He then singled out the Rohingya ethnic group, hundreds of thousands of whom were forced to flee Myanmar’s Rakhine State in 2017.

“As I think of Asia, I cannot forget the Rohingya people: may Jesus, who was born poor among the poor, bring them hope amid their sufferings,” he said.

The pope concluded: “On this festive day, I think in a special way of all those who refuse to let themselves be overcome by adversity, but instead work to bring hope, comfort and help to those who suffer and those who are alone.”

“Jesus was born in a stable, but was embraced by the love of the Virgin Mary and St. Joseph. By his birth in the flesh, the Son of God consecrated familial love. My thoughts at this moment turn to families: to those who cannot come together today and to those forced to remain at home.”

“May Christmas be an opportunity for all of us to rediscover the family as a cradle of life and faith, a place of acceptance and love, dialogue, forgiveness, fraternal solidarity and shared joy, a source of peace for all humanity.”

After delivering his message, the pope recited the Angelus. Putting on a red stole, he then gave his blessing, which carried with it the possibility of a plenary indulgence.

Plenary indulgences remit all temporal punishment due to sin. They must be accompanied by full detachment from sin, as well as sacramental confession, the reception of Holy Communion, and prayer for the pope’s intentions once it is possible to do so.

Finally, Pope Francis offered Christmas greetings to those present in the hall and watching worldwide via the internet, television, and radio.

“Dear brothers and sisters,” he said. “I renew my wishes for a happy Christmas to all of you who are connected from every part of the world through radio, television and other means of communication. I thank you for your spiritual presence on this day marked by joy.”

“In these days, in which the atmosphere of Christmas invites people to become better and more fraternal, let us not forget to pray for the families and communities that live amid so much suffering. Please also continue to pray for me.”

A Christmas Message from Archbishop Schnurr

Today's Video: If You Think This Year Was Supposed to Be Different 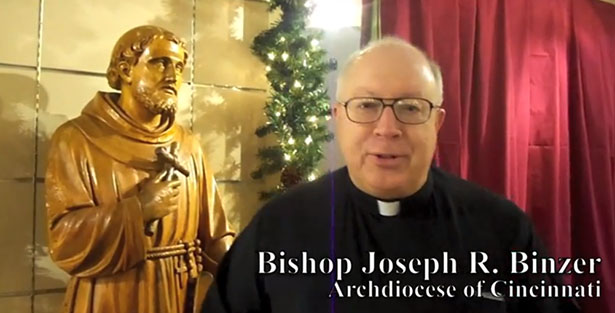