Vandalism strikes the Society for Preserving our Roman Catholic Heritage

In a brazen act of destruction, vandals ruined or badly damaged Catholic religious items and statuary and a miniature sanctuary at the Dayton headquarters of SPORCH (Society for Preserving our Roman Catholic Heritage) in November.

Mary Popp, SPORCH director, estimated more than $40,000 in property was damaged and the old school building where SPORCH is housed suffered considerable water damage. Police told SPORCH that a water pipe appeared to have been jury-rigged by the vandals to burst the day after the nighttime break in.

Police told Popp they suspect teens or young adults, and recovered blood for a DNA test from a glass pane broken to gain entry through a rear door. No arrests have been made.

Two statues made by the Daprato Statuary Company in Chicago were heavily damaged. “From about 100 years ago until maybe the 1960s, Deprato was the Cadillac of religious statues,” Popp said. “I had two matching pieces with glass eyes. We got them years from Illinois, from a person who had stashed them for more than two decades after they were going to throw them out. They did not want to see them thrown out.

“The vandals knocked in the faces of both,” she said. “We are going to try to bring them back because they were Deprato, but it is going to be extremely expensive — $6,000 to $8,000. They are plaster statues with phenomenal finishes. It’s very difficult to match the finishes, and replacing the glass eyes is going to be a chore.”

The vandals also smashed miniature sanctuary. “I had a historical sanctuary and they just a busted those things up,” Popp said. I had some of those pieces specially made, and they are destroyed. Why? It took me 10 years to collect what I needed, and this means I have to start again.”

Religious items were not the only targets. “Everything was thrown off shelves onto the floor,” Popp said. “A reciprocal saw and a miter saw were taken. Other equipment was destroyed, including three computer monitors.”

While the building is insured, SPORCH is not. Founded in 1994 by a group of clergy, religious, laity, and artisans to “preserve the spiritual purpose and enduring beauty of Catholic liturgical printed art items, altar appointments, ordinals, missals, hymnals and other artifices from the Roman Catholic liturgical and cultural heritage of our nation,” SPORCH helps promote traditional liturgical art, and aids priests and parishes who celebrate the Tridentine Latin Mass by selling reproductions of Latin Mass cards (sets of ornate, printed cards set on the altar during Mass) and other items.

One of the group’s missions is to build a bridge between the Catholic traditions of the past and promote continuing them into the church of tomorrow. “The Good Lord took me by the hand to do it,” Popp said. But for now, that tomorrow is on hold as what could be salvaged of the reproductions, books, and art works SPORCH sold throughout the country now sit in a warehouse waiting for the headquarters to be repaired.

Popp said she expects to reopen in a year or less, with volunteers willing to help when the building can be occupied and donations to help with the restoration (accepted online at SPORCH.org).

The attack was the second major incidence of vandalism against a Catholic site in Dayton at the end of 2017. In early October, two people toppled and smashed large statues at Immaculate Conception Parish’s outdoor Marian shrine. (For story and photos, see TheCatholicTelegraph.com, keyword “vandalism”) No arrests have been made in that incident. 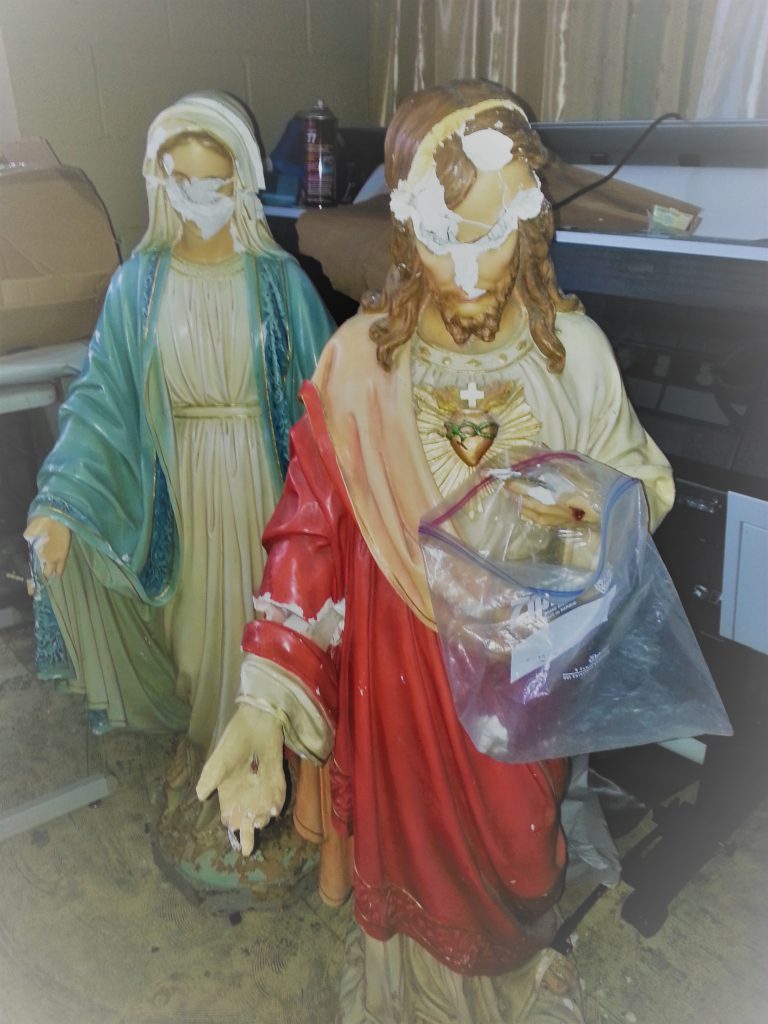 Vandalism strikes the Society for Preserving our Roman Catholic Heritage