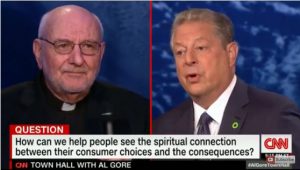 After being introduced by host Anderson Cooper, Father Rausch said his experience as a priest in Appalachia has led him to believe the climate crisis is really a crisis in spirituality.

Father Rausch asked, “Mr. Vice President, how can we influence people to see a spiritual connection in their consumer habits (so) that they can see the consequences of their buying, the consequences (they) have on people in Appalachia and also in other parts of God’s kingdom?”

Before delving into his response, Gore took a moment to thank Father John for his ministry, and expressed admiration for the Holy Father, Pope Francis.

“Well, thank you, Father. And thank you for what you do. I’m a Protestant, but I’ll tell you, because of Pope Francis, I really could become a Catholic. He is really an amazing spiritual leader.”
Gore, who was raised a Southern Baptist, went on to recommend that people of all faith traditions should read Pope Francis’ encyclical Laudato Si.

Father Rausch’s Appalachian justice education ministry raises awareness of how certain environmental issues affect the lives of people in the region. He leads pilgrimages to Appalachia to see the destructive effects of mountaintop removal, and also leads Wildflower Walks to highlight the beauty of God’s creation.

“Unless people realize that we’re all connected, and that’s why I talked about spirituality, we will never be able to heal the planet,” Father John said. “God has given the common good to everyone…Vice President Gore represents a prophetic voice at a time when we have turned our self to selfishness when we really need to develop community and a spirit of being stewards of God’s garden.”
Glenmary Home Missioners are a Catholic society of priests and brothers who, along with coworkers, are dedicated to serving the spiritual and material needs of people living in mission counties throughout Appalachia and the South. For more on this story, click HERE

Christians are oriented toward light, hope, pope says at audience