Pope Francis announced Sunday that he will create 21 new cardinals in August, one of whom is the bishop of San Diego, California.

Who is Bishop Robert McElroy? Here are some fast facts:

A San Francisco native, McElroy has led the San Diego diocese since 2015.

Born in San Francisco in 1954, Bishop McElroy grew up in San Mateo County. McElroy was ordained a priest in 1980 and served as an auxiliary bishop to San Francisco’s Archbishop Salvatore Cordileone starting in 2010.

In 2015, Pope Francis tapped him to lead the San Diego diocese, succeeding Bishop Cirilo Flores, who died of cancer in September 2014 just one year after assuming the position.

McElroy underwent coronary bypass surgery late last year, which according to the diocese was successful. As a cardinal, at age 68, he is well within the maximum age of 80 to be able to vote in a future conclave.

McElroy is a frequently-heard voice in the “Eucharistic coherence” debate.

McElroy has strongly asserted his views that the Eucharist ought not be denied to politicians who support the legalization of abortion. In addition, he has often criticized what he sees as the elevation of abortion as a priority over other social concerns, such as the death penalty and care for migrants and the environment.

In November 2019, McElroy sparked controversy at the United States Conference of Catholic Bishops’ Fall General Assembly when he objected to language in a letter that was to be published as a supplement to the 2015 document  “Forming Consciences for Faithful Citizenship.” McElroy said he was opposed to a line which said “the threat of abortion remains our preeminent priority because it directly attacks life itself.”

McElroy called that line “at least discordant” with what Pope Francis had taught, but he did not explain as to what particular teaching he thought this violated.

In a May 5, 2021 essay, Bishop McElroy decried what he called “a theology of unworthiness” to receive the Eucharist, whereby those who practice it focus too strongly, in his view, on discipline.

Bishop McElroy argued that the logic of denying pro-abortion politicians the Eucharist constitutes an “extremely expansive” litmus test that “applies sanctions very selectively and inconsistently,” and that in his view abortion is being singled out to the detriment of other evils.

“The Eucharist must never be instrumentalized for a political end, no matter how important,” McElroy asserted in that essay.

He also said, at an online Georgetown University forum in February, “I do not see how depriving the president or other political leaders of Eucharist based on their public policy stance can be interpreted in our society as anything other than the weaponization of Eucharist and an effort not to convince people by argument and by dialogue and by reason, but, rather, to pummel them into submission on the issue.”

Some observers have noted the contrast between McElroy’s outspoken opinion that the Eucharist not be denied to that of his former Archbishop, Salvatore Cordileone, who last week barred U.S. House Speaker Nancy Pelosi from Holy Communion until she repents of her obstinate support for abortion.

In Cordileone’s case, he explained that he issued the instruction regarding Pelosi in accordance with canon 915 of the Code of Canon Law, which states that “Those … obstinately persevering in manifest grave sin are not to be admitted to Holy Communion.”

The Church teaches “formal cooperation in an abortion constitutes a grave offense.”

“After numerous attempts to speak with her to help her understand the grave evil she is perpetrating, the scandal she is causing, and the danger to her own soul she is risking, I have determined that the point has come in which I must make a public declaration that she is not to be admitted to Holy Communion unless and until she publicly repudiate her support for abortion ‘rights’ and confess and receive absolution for her cooperation in this evil in the sacrament of Penance,” Cordileone wrote in a May 20 letter.

McElroy has faced questions about his response to information about the sexual abuse crisis.

In 2016, clerical abuse researcher Richard Sipe wrote to Bishop McElroy, listing allegations against half a dozen bishops and warning of a broader problem of chastity violations among clergy. In the letter, Sipe listed allegations against several bishops, including reports of misconduct by Archbishop John Neinstedt and Bishop Robert Brom, abuse by Bishop Thomas Lyons and Bishop Raymond Boland, and cover-up by Cardinal Roger Mahony.

Sipe also said that he had interviewed 12 priests and seminarians who described sexual advances and activity on the part of then-Cardinal Theodore McCarrick.

For his part, McElroy said he did not respond to that letter because the manner in which it was delivered made Sipe untrustworthy. Following Sipe’s death, McElroy said he had raised concerns that some of the information may have been inaccurate, and also that Sipe had not provided any corroborating evidence for his claims.

In 2019, McElroy told the National Catholic Reporter that he is in favor of ordaining women to the diaconate, saying that “My view on it is [that] women should be invited into every ministry or activity we have that’s not doctrinally precluded.” Pope Francis has asked two commissions to study the question of a female diaconate in the Catholic Church, the second of which was instituted in 2020 following discussion of women deacons during the 2019 Amazon synod.

In February 2021, McElroy was one of several U.S. Catholic bishops who signed onto a statement in opposition to “violence, bullying or harassment” directed at those who identify as LGBT. The statement reads in part: “All people of goodwill should help, support, and defend LGBT youth; who attempt suicide at much higher rates than their straight counterparts; who are often homeless because of families who reject them; who are rejected, bullied and harassed; and who are the target of violent acts at alarming rates.” 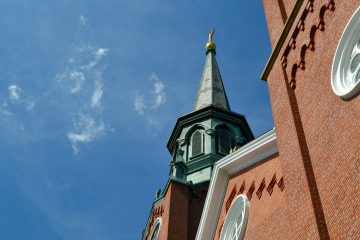