ARCHDIOCESE — Andrea Koverman is quick to acknowledge that her experience with the Sisters of Charity of Cincinnati was “simply unavoidable” because her family is “full of Sisters.” This includes two great aunts, an aunt and a cousin.

Koverman, who was raised in Bellbrook and attended Incarnation School in Centerville and Archbishop Alter High School in Kettering, is now following in the footsteps of the faith-filled women who inspired her as a child. She is currently in the pre-entrance stage with the Sisters of Charity and living at their congregational house, Casa de Caridad, in southern New Mexico.

Koverman has fond childhood memories of summer picnics at the Sisters of Charity motherhouse at Mount St. Joseph, where her great aunts, Sisters Mary Walburga and Mary Naomi, were always present.

“I loved going to the Mount, and the first seed of discernment was actually planted there at one of those picnics when I was about nine or ten, “ she recalled. “As I went running by, one of the aunts reached out and caught my arm, bringing me to an abrupt halt before her. She proceeded to tell me that I was going to make a fine Sister. Though this proclamation was dismissed by most as a ‘senior moment,’ I thought that God had told her to say that to me and excitedly shared it with the rest of the family.”

The seed was planted, although it would take some time for Koverman’s vocation to grow. She went on to attend Miami University, earning a bachelor’s degree in special education, and moved to the coastal town of Beaufort, S.C, where she earned two master’s degrees in curriculum and administration.

Throughout her life, Koverman said, her Aunt Jane, otherwise known as Sister Mary Joseph, and a second cousin, Sister Kateri Maureen, have been particularly influential. “Sister Kateri was the first one who first seriously posed the question of discernment to me as an adult. I was honestly taken aback a bit, because I had dismissed the idea long before that,” she admitted.

After many conversations and much prayer and reflection, Koverman’s cousin referred her to Sister Janet Gildea, who serves director of affiliates for the Sisters of Charity. Emails and phone conversations followed and Koverman found herself increasingly drawn toward religious life. Initially terrified at the thought of leaving her home, friends and way of life, she said, “the idea had always been inside in a secret little place and Sister Janet’s steady and gentle support kept me from giving in to my jitters. She gave me the courage to make my discernment the primary focus of my life, as well as offering the ideal place in which to do it.”

That place was Casa de Caridad, where Koverman has lived since last fall with several Sisters and other women in various stages of discernment. The eight-bedroom home offers young women a place to share community, a priority for the Sisters of Charity, said Sister Janet. In recent years, the Sisters have welcomed women  for periods as short as one week and for as long as four years. They have been as young as 16 and as old as 32 and have come from throughout the United States, Mexico, Guatemala, Honduras, Puerto Rico and the Philippines. “Catholic, Lutheran, Baptist and ‘Christian,’ they have wanted to share in our common prayer, our ministries and in the daily routines of our lives,” explained Sister Janet.

Some of the women were discerning a vocation to religious life; others were seeking ministry experience or simply needed a safe and supportive community. The experience has been mutually rewarding, said Sister Janet. “We have learned about other cultures, younger generations and different faiths. They have helped us learn about the reality of young adults making their way in our country and the church today. We’ve taught them how to wash dishes by hand and they’ve taught us how to develop PowerPoint presentations. It’s been a good trade.”

Koverman, who is currently teaching fourth grade at Our Lady of the Assumption School in El Paso, Texas, describes Casa de Caridad as a “contemporary experience of community living.

“In addition to the Sisters and the frequent visitors who come for respite, fellowship or service, there are three other women in discernment living here. Supporting each other and sharing our experience has been unexpectedly beneficial. I have learned so much through and with these other women, and it is such a gift to share the journey.”

“Here on the border, in the midst of great humanitarian need, the Sisters have created an environment that daily allows us to witness and participate in what it means not only to have faith, but to actively live it out,” she added. “They have touched countless lives, and little miracles seem to follow wherever they go into action. They humbly use their gifts and talents to serve with fierce dedication and selflessness. In this community, I am learning first hand what it means to be the eyes and ears, the hands and feet of Christ. They stay centered through prayer and demonstrate that our relationship with God is ever growing and deepening, and a source of great comfort and joy. I feel more and more blessed to have the opportunity to live with and learn from such a diverse and inspirational group of women. I am not certain what the future holds for any of us, but I know without a doubt that my life will never be the same because of this experience.” 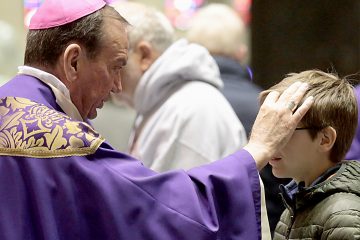