Wrestle & Prevail: How I spent my Super Bowl Sunday 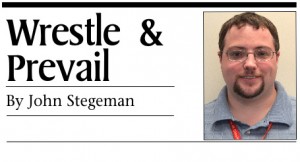 A few weeks ago more than 70,000 people live and more than 100 million at home watched the Baltimore Ravens defeat the San Francisco 49ers in a classic Super Bowl contest. My wife and I on the other hand didn’t see a single snap.

It’s not that we don’t like football. Quite the opposite is true. During our first year of marriage we spent every Sunday after mass at a local Buffalo Wild Wings watching the Bengals. As a former sports writer, to me the Super Bowl is as big a holiday as any secular celebration.

That Sunday, however, we didn’t partake in a secular celebration.

The Super Bowl has been going on for nearly 50 years. It’s a tradition, and we humans love traditions. But as Catholics, we go back much further than Super Bowl I. That Sunday, Feb. 3, my wife Kelli and I were honored to stand as godparents alongside the parents of a beautiful baby girl as she was baptized into life with Christ.

Teresa Lynn is as cute as a little girl can be. Less than a month old at her baptism, she probably still didn’t crack the six-pound mark. She slept peacefully through most of the ceremony, waking up with a look of precious confusion when the priest poured the holy water over her head.

Now you might be asking yourself how participating in a baptism could really cause one to miss the Super Bowl. After all, the Rite of Baptism certainly isn’t an all day event. That’s true, but this baptism took place on the military base of Fort Lee in Petersburg, Va. I’ll save you the time checking with Google maps and tell you the directions call it an 8.5 hour drive.

The directions didn’t take into account the weather the region was experiencing on Feb. 2, the day we left. A significant winter storm stretched almost the whole route from Cincinnati to Virginia, making it more like a 12-hour drive.

After the trek we met our goddaughter-to-be and visited briefly with her family. Teresa’s parents are my cousin, Captain Billy Reinstatler, and his wife Sara. Then we headed directly to the hotel for a nap before the following day’s 8:45 a.m. mass and baptism.

The Mass on base in the fort’s Memorial Chapel was lovely, and the baptism was a beautiful reminder of the depth of our Catholic faith. There were about two pews worth of people there to see Teresa’s baptism, and a church full of men and women donning everything from suits, to fatigues to Ravens and 49ers gear.

Following the baptismal vows, the priest reminded us and all those in attendance, “This is our faith. This is the faith of the church, we are proud to profess it, in Christ Jesus our Lord.”

The sacrament itself, of course, imprints an indelible spiritual sign on the baptized, and signifies the grace of the redemption Christ won for us by His cross (Catechism, 1235, 1272). Also, the ceremony ties us to centuries of Catholics to come before us.

This is our faith, we are reminded. This is now also the faith of the baptized. Baptism has a beautiful continuity that ties us together through the centuries more than any secular celebration. So on Super Bowl Sunday we donned our Sunday bests to stand with Billy and Sara as the church welcomed Teresa Lynn to a new life in Christ.

After the ceremony and reception, we hit the road again for Cincinnati. The drive back was less fraught with the perils of snow, but still a little dicey.

When the Super Bowl kicked off, my wife had just taken the wheel and I was taking a nap on a desolate stretch of US 64 in West Virginia. Around halftime, we were stopping for a nice greasy dinner at Burger King in Jackson, Ohio.

We didn’t miss the game in its entirety, however. After dropping off the rental at CVG Airport and loading up the pickup truck to head home, we found the game on the radio just in time to here San Francisco’s final drive.

We sat in our driveway, exhausted and ready for bed, listening to the final play of the game as the safety punt return didn’t work out for the 49ers. Then we went straight to bed.

So in 2013, I didn’t miss the whole Super Bowl, just most of it. Still, I’d have been happy to miss it all because the reason for our driving roughly 24 hours in two days was about much more than the “perishable crown” that is the Lombardi Trophy. It was about welcoming a new life into the church as, “one ‘anointed’ by the Holy Spirit, incorporated into Christ who is anointed priest, prophet, and king.” (Catechism, 1241).

John Stegeman is a staff reporter at The Catholic Telegraph.

Previous Columns by John Stegeman
Wrestle and Prevail: Proper understanding of sports can lead to stronger faith
Commentary: So God made a Pope

Pope asks continued prayers in these 'unusual' days for church

More than 1,000 prepare to join church at Easter

Wrestle & Prevail: How I spent my Super Bowl Sunday