CHICAGO (CNS) — When world-renowned cellist Yo-Yo Ma brought his Concert for Peace to St. Sabina Church for the second time June 10, there was a special feature — five original works written with family members who lost loved ones to gun violence as a tribute to the people who died.

They are among 24 original songs created by the Chicago Symphony Orchestra’s Negaunee Music Institute and Purpose Over Pain, a St. Sabina organization of parents who have lost a child to gun violence. All songs are available at notesforpeace.org.

The idea to create the songs came after Ma saw the memorial board outside the parish that features photos of all the people connected to the parish killed by gun violence.

Ma first visited St. Sabina in spring 2017 on a Sunday in between morning Masses. The senior pastor, Father Michael Pfleger, was told a man saying he was Yo-Yo Ma was in the church and wanted to meet him, which he thought was a joke. It wasn’t.

Ma had stopped by the church on his way to the airport saying he followed the priest’s work against violence and wanted to help.

“A lot of people tell me they want to help and do nothing. I always get my hopes up and wonder what’s next. About two weeks later I got a call and they said ‘Yo-Yo is serious. He wants to help,'” Father Pfleger said during a pre-concert news conference. “The only thing better than his talent is his spirit. He used his gift to invite people — not to come downtown, not to the Symphony Center, not to Grant Park – but to 78th Place.”

Ma, who is the Judson and Joyce Green Creative Consultant for the Chicago Symphony Orchestra, said he now feels part of St. Sabina and even though he doesn’t live in Chicago, when he reads about the gun violence in the city he feels the pain.

So Ma and the Negaunee Music Institute asked people who lost family members to gun violence to share the stories of their loved ones and their grief and pain with songwriters and composers. The families and songwriters wrote the lyrics and composers wrote the songs. It wasn’t just mothers who wrote songs but siblings and children too. Families gave some advice on the sound saying they wanted the songs to be slow and jazz-like.

All of the songs are available to hear along with photos of those who died at notesforpeace.org. In some cases, family members sang the lyrics themselves. Desiree Smith recorded a rap song about her dad, Dontee Smith.

In the case of Rolanda Lakesia Marshall, who died in 1993 at 14, her song was the lyrics of a poem she wrote.

Hardly anyone from the musicians and singers to the audience members would be unaffected when hearing the five songs performed, Ma told reporters.

“One of the singers said to me: ‘You know I’m going to be a mess today, but every time I sing the ‘Song for Terrell,’ gradually I realize that my job is to deliver the message and I have to do it in a way that is very clear,'” Ma said. “That’s the musician’s role. You first empathize with someone but then you actually have to deliver the message clear so someone else gets it.”

Working on the songs for their children was another step in the healing process, said Pamela Bosley, founder of Purpose Over Pain. Bosley’s son Terrell, who loved to play the bass guitar, was shot and killed in 2006 at age 18.

“For most of the parents, music is a way of healing,” Bosley said, whose son Trevon wrote the lyrics for “Song for Terrell,” which Ma performed with members of the Civic Orchestra of Chicago.

“A lot of times we hold our pain within, but if somebody sits you down and says: ‘Tell me about your son and what you feel,’ that allows you to express it and let it out,” she said. “There were a lot of emotions with this project, a lot of crying but we made it through and with the help of God we were able to get songs.”

Terrell always wanted to travel the world as a musician and now he will do that through this song, Bosley said.

“I believe in my heart that Terrell and the rest of the children are looking down on us and are happy that the orchestra and Yo-Yo Ma thought enough to write songs on behalf of our children,” she said.

Duriga is editor of the Chicago Catholic, newspaper of the Archdiocese of Chicago.

Coming next week: A look at ABIDE 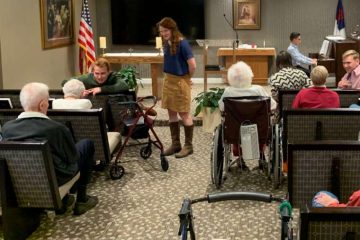