At least 500 people attended a prayer rally in a steady spring rain to protest the HHS Mandate requiring free contraception and sterilization services from all health care insurance plans without religious exemption. 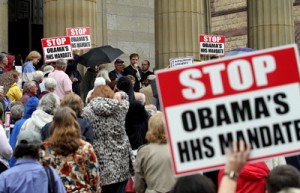 The crowd of young and old, individuals, families and school and church groups gathered on the steps of St. Peter in Chains Cathedral in downtown Cincinnati at noon Friday, on the anniversary of the passage of the Affordable Care Act at the same time 140 other such rallies were being carried out across the U.S., according to organizer Carl Brown.

The rallies were organized by the Pro-Life Action League and Citizens for a Pro-Life Society to oppose the new mandate from the U.S. Department of Health and Human Services (HHS) that requires all employers provide free contraceptives, sterilization and abortion-inducing drugs through their health plans, even in violation of their consciences.

During the hour-long rally, which began with the singing of the National Anthem, prayer and singing was interspersed with speeches about the issue of the First Amendment freedom of religion guarantee and recommended action plans including prayers, attending rallies, registering voters and publicly bringing the issue to the attention of others.

The crowd on the cathedral steps spread across Plum Street to the steps of the Isaac M. Wise Temple and to a nearby parking garage.

Brown said there would likely be more rallies and petition drives to bring more attention to the issue and he received applause and shouts of support when he declared, “We will not comply!”