SANTIAGO DE CUBA, Cuba (CNS) – Celebrating an outdoor Mass on his first day in Cuba, Pope Benedict XVI acknowledged the struggles of the country’s Catholics after half a century of communism and described human freedom as a necessity for both salvation and social justice.

The pope spoke March 26 in Antonio Maceo Revolution Square, in Cuba’s second-largest city. He had arrived in the country a few hours earlier, after spending three days in Mexico.

The Vatican had said the square would hold 200,000 people and it was full; several thousand also filled the streets leading to the square. Cuban President Raul Castro, who welcomed the pope at the airport, sat in the front row for Mass.

Tens of thousands of those at the Mass were wearing white T-shirts welcoming the pope as the “pilgrim of charity”; many wore baseball caps to protect them from the hot sun.

Before the pope arrived in the popemobile, the original statue of Our Lady of Charity of El Cobre, Cuba’s patroness, was driven atop a white truck through the cheering crowd. The statue then was enthroned near the papal altar.

In his homily, Pope Benedict recognized the “effort, daring and self-sacrifice” required of Cuban Catholics “in the concrete circumstances of your country and at this moment in history.” Though now more tolerant of religious practice than in earlier decades, the communist state continues to prevent the construction of new churches and strictly limits Catholic access to state media.

In a possible allusion to reports that the regime had prevented political opponents from attending the Mass, Pope Benedict extended his customary mention of those absent for reasons of age or health to include people who, “for other motives, are not able to join us.”

The pope painted a dire picture of a society without faith.

“When God is set aside, the world becomes an inhospitable place for man,” he said. “Apart from God, we are alienated from ourselves and are hurled into the void.

“Obedience to God is what opens the doors of the world to the truth, to salvation,” the pope said. “Redemption is always this process of the lifting up of the human will to full communion with the divine will.”

Taking his theme from the day’s liturgical feast of the Annunciation, when Mary learned that she would conceive and bear the Son of God, the pope emphasized that fulfillment of the divine plan involved Mary’s free acceptance of her role.

“Our God, coming into the world, wished to depend on the free consent of one of his creatures,” Pope Benedict said. “It is touching to see how God not only respects human freedom: He almost seems to require it.”

The most specific advice in the pope’s homily regarded a topic familiar to his listeners in the prosperous capitalist countries of Western Europe and North America: the sanctity of the “family founded on matrimony” as the “fundamental cell of society and an authentic domestic church.”

“You, dear husbands and wives, are called to be, especially for your children, a real and visible sign of the love of Christ for the church,” Pope Benedict said. “Cuba needs the witness of your fidelity, your unity, your capacity to welcome human life, especially that of the weakest and most needy.”

According to the Center for Demographic Studies at the University of Havana, Cuba’s divorce rate has almost tripled in four decades, rising from 22 divorces per 100 marriages in 1970 to 64 in 2009. The country’s parliament is scheduled later this year to consider the legal recognition of same-sex marriage, in response to a campaign led by Mariela Castro, daughter of President Raul Castro.

Despite his challenges to Cuban society, Pope Benedict concluded his homily by repeating an earlier call for patience with the Catholic Church’s policy of dialogue and cooperation with the communist regime, a process initiated by Blessed John Paul II during his 1998 visit to Cuba.

“May we accept with patience and faith whatever opposition may come,” the pope said. “Armed with peace, forgiveness and understanding … strive to build a renewed and open society, a better society, one more worthy of humanity, and which better reflects the goodness of God.”

A 30-year-old woman in a baseball cap who identified herself only as Xichel told Catholic News Service she and about 100 others traveled about 165 miles from Camaguey for the Mass, and she hoped to see the pope in Havana. Older pilgrims traveled by train or bus, she said.

“I came to see the pope because I am Catholic and he is the successor of Peter, who was the first pope,” she said, adding that she saw Blessed John Paul in Camaguey in 1998.

She also expressed pride that a member of her parish was to read the second reading.

After the first reading, hundreds of people began leaving the Mass. Unlike large-scale papal Masses in other cities, this one had no Jumbotron screens and, to many, the pope looked like a small figure on the distant altar. Many who had been praying and singing seemed not to focus on the homily and began chatting or moving about.

Contributing to this story was Cindy Wooden in Havana. 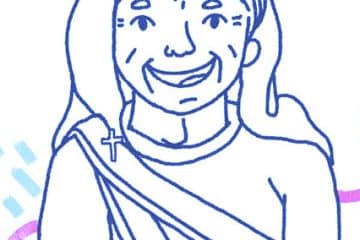