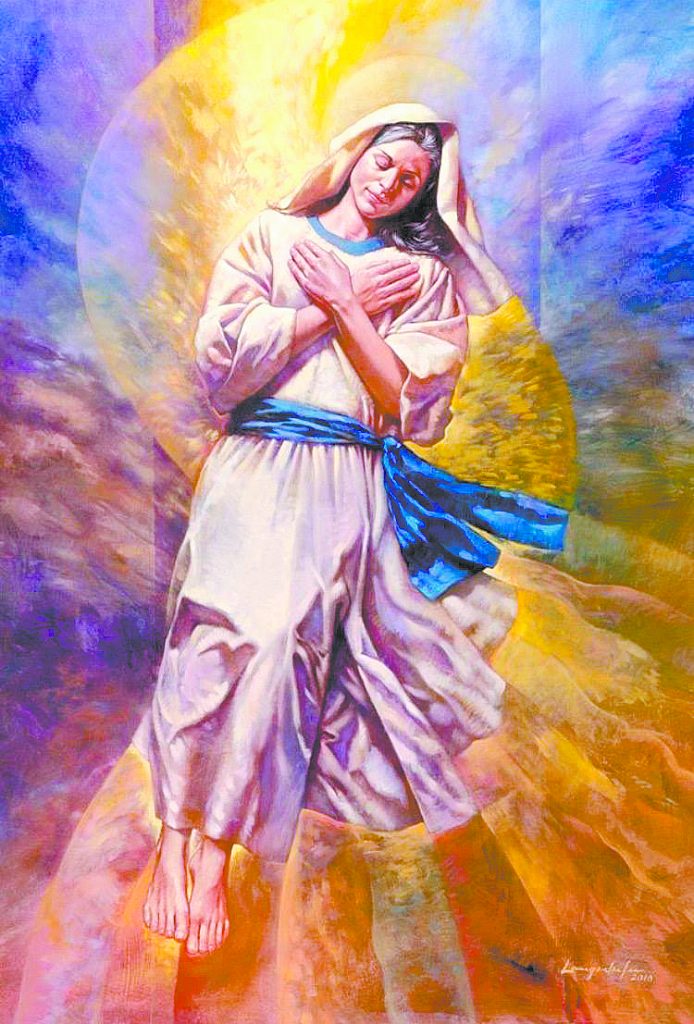 It was that rarest of commissions: “Paint whatever you want to paint.”

Tim Langenderfer didn’t have to think twice. “I want to paint the Assumption,” he said.

An accomplished painter who has taught at the University of Dayton and currently teaches at Lehman Catholic High School, Langenderfer has had a long interest in liturgical art. These days, his commissions are nearly all portraits, with subjects ranging from families to saints. He’s painted the official portraits of two local bishops – Archbishop Daniel Pilarczyk and Bishop Roger Foys – and he recently completed a portrait of Pope Benedict XVI for Mount St. Mary’s Seminary of the West.

So it’s no surprise that the painting he did of the Mother of God being assumed to Heaven has many qualities of a fine portrait. But it also makes a theological statement.

“I studied many paintings of the Assumption, and I realized that in a lot of them she seemed to be ascending, rather than being assumed,” he said. “I wanted to show, first, that something was being done to her. She wasn’t doing it herself. Second, I wanted to convey the complete trust Mary had in God.”

Langenderfer painted the Virgin with her eyes closed, but with her hands in a traditional position of burial, to show that whether Mary died or was assumed while asleep not a matter of dogma. “I left it open to interpretation,” he said.

He also portrayed Mary as older than in many classic Assumption paintings, and with strong hands. Langenderfer said that many painters portrayed Mary as delicate and young out of reverence, but that his way of expressing reverence was to show the dignity of women who work. His Mary’s hair is graying, but “even though she did age, she aged in a graceful way,” he said, because she was without sin.

Before beginning his sketches, Langenderfer consulted scholars at the University of Dayton’s Marian Library, where he was able to research Marian theology as well as see many classic and contemporary representations of the Blessed Mother. For his own painting, he combined a wide range of styles, from the traditional Academic style to art nouveau, art deco, and Impressionism, so that his contemporary take connects with sacred art from previous centuries. Also in the tradition of sacred art, the painting includes many symbols: Twelve bands of color radiating from her dress, for instance, symbolize both the 12 tribes of Israel and the 12 apostles.

Langenderfer’s client, John Heckel, gave the painting to his parents for their 60th wedding anniversary. Bert and Mary Heckel “hung it in their living room, where they prayed the rosary together every day,” Langenderfer said. “They were daily Mass attendees, but eventually they were unable to go to church, so they would pray together under the painting.”

After the Heckels passed away, the family donated the painting to St. Albert the Great parish. But when St. Mary of the Assumption built its new church, Langenderfer said, “somebody there had the idea of giving the contemporary painting of the Assumption to the new church dedicated to her.” It now hangs in the narthex, where parishioners pass it as they enter the main church.

Prints of “The Assumption” are available at Langenderfer’s website, and parishes and groups can use the image free of charge for prayer cards and bulletins. For information see TimLangenderfer.com or call Langenderfer Studio at (937) 657-1910.