On Christmas morning, Children of Mary sisters visiting Cincinnati’s cathedral got a surprise gift when they walked in the door: They found a painting of themselves at prayer hung in the marble narthex.

Northern Kentucky painter David Meuller was right behind them with his mother and son, and caught the scene on his phone camera. “It was a really special moment,” he said.

How the 40 x 60-in. painting made its journey from a gallery show to St. Peter in Chains is a story of faith and prayer. It started with Mueller, who grew up in Chicago and settled in California, Ky., searching for a subject for a major painting that would express his beliefs about prayer, hope, and gratitude.

“Two years ago in March, I will have finished treatment for cancer in my neck,” he said. “For five months, I had all kinds of people praying for me. Every time they would tie me down for radiation, five days a week for seven weeks, I would say, ‘Let it be in God’s hands.’ There’s nothing you can do at that point but let it go – you have no control over it, over what happens. All I could do was pray and know that other people were praying for me.”

While Mueller has no formal religious affiliation, he said his nondenominational faith and the faith of others made all the difference during those months, and brought him peace. “I have an 11-year-old son,” he said. “I would not pray that God help me, I would pray that my son would not be left without a father. My girlfriend and painting partner, who is Catholic and took such good care of me while I was sick, said I was brave. But I wasn’t brave, I had peace.”

Now a volunteer driver for the American Cancer Society, Mueller said he tries to help the people he drives to their appointments and treatments find the same peace. And as he and his girlfriend, MaryBeth Karaus, prepared for a major show together at Cincinnati’s Eisele Gallery of Fine Arts last year, he wanted to represent that peace with a painting.

One of his private art students provided the subject. “Marcella Hsiung brought me a photo of the sisters praying at the cathedral last Christmas,” he said. “And it captured just such an amazing moment, I knew it was the perfect subject to convey the power of prayer.”

Mueller calls his style “painterly realism.” He combines an almost photorealism with impressionistic brushwork that dissolves into pure color, inspired by the way Michelangelo’s statues seem to rise out of chisled rock. “It’s loose in some places and unfinished in others,” he said, giving the impression that the figures and objects emerge organically out of the paint. The student’s photo was everything Mueller was looking for.

“It was amazing,” he said. “The sincerity, the deep emotion involved, the depth of adoration and devotion in their faces, gestures, and actions — for me it was so profound. And from a purely aesthetic point, the graphic puzzle pieces of dark and light, were perfect as well.”

After four months creating the painting, Mueller went about the hardest business of a working painter: shopping the piece to possible buyers after the show. He has work in collections around the world and has painted official portraits of two governors and an Ohio legislator, but new commissions and sales take time and effort — and a little prayer. “Every once in a while you look into the heavens and say, ‘If you want me to do this for a living, help me find a buyer,” he joked.

Mueller sent photos and inquiries to churches as well as collectors, in hopes that the painting would find a home in some public place where many people could see it. One of those letters went to Archbishop Dennis M. Schnurr. And while the cathedral has no budget for new art, its rector, Father Jan Schmidt, thought the painting belonged there.

“Art is part of Catholic history,” he said. “It helps us understand the times it was created. We haven’t had any new art here since the 1960s, and this painting portrays a scene that took place within the cathedral. I thought it was important to add it to the collection.”

With the archbishop’s okay, Father Schmidt looked for potential donors and found one who wanted to buy the painting anonymously — but only if the painting were displayed where people could see it. That posed a problem, because nearly every inch of the cathedral building is decorated.

“You can’t put anything on top of anything in the cathedral,” he said. “The only public space we could hang the painting is in the narthex.”

The narthex includes the octagonal space between the massive wooden doors and the vestibule outside the main nave and sanctuary. The walls and floors are paved with black and green marble, and the ceilings and inner doors are brass. Hung just above one of the doors, where it fits as if it were made for the space, the painting now greets visitors — including the Children of Mary sisters on Christmas day.

“I was there with my mother and my son,” Mueller said. “And at the exact same time we got there two vans pulled up, and it was the sisters. We followed them up the stairs and there they were, pointing up at themselves!

“I cannot tell you how happy I am the painting is there.”

The Children of Mary were formally established as a Public Association of the Faithful in the archdiocese in 2017. For our story visit TheCatholicTelegraph.com and search “Children of Mary.”

David Mueller grew up in Chicago and moved California, Ky., to work for Gibson Greetings in Cincinnati. “Everything I wanted to do in life evolved here,” he said. “The Cincinnati Art Club became my family and friends and business training all in one. One of its presidents was Carl Zimmerman, who did the paintings of the archbishops and the Stations of the Cross murals in the cathedral, and now I have a painting in there!“ 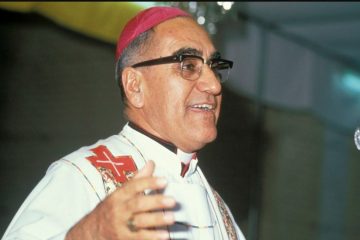